The 595 comes in a variety of trims, with three engine outputs. All are equipped with the familiar turbocharged 1.4-litre T-Jet motor and even the entry-level 143bhp model can easily show the Volkswagen Up GTI a clean pair of heels in a straight line, but it’s brisk rather than outright fast.

The 163bhp Pista and Turismo models should be usefully more rapid, but it’s the top-spec 178bhp Competizione and Esseesse models that driving enthusiasts will be most interested in. Chiefly, because they come equipped with uprated Koni dampers, a more potent Brembo braking system, 17in Supersport alloy wheels and figure-hugging Sabelt seats. The Essesse adds to this with a mechanical limited-slip differential, which is designed to meter out the power more effectively to the front wheels, helping to minimise wheel scrabble when accelerating out of bends.

Despite its small displacement, the engine sounds menacing. Below 30mph, small accelerator inputs have the 595 gurgling, popping and crackling; with the louder Record Monza exhaust fitted to Competizione versions, and an equally riotous Akrapovic exhaust fitted to the Essesse, this is certainly not a hot hatch for those who crave anonymity. Even the lesser models with a ‘normal’ twin-pipe system sound rather naughty.

The engine is willing to rev harder than most small turbocharged motors, has a progressive delivery, and feels responsive even from lower revs. We wish its gearbox was a little more direct in its throw, but with a 0-62mph time of 6.7sec and a 140mph top speed, straight-line performance is on a par with bigger hot hatches.

That said, it’s still hard to justify the massive price tag of the Essesse – for context, it’s not that far off the price of the brilliant Renault Megane RS. Instead, we’d save our money and go for the more reasonably priced Competizione. With the same amount of power and effectively the same chassis, it offers near enough the same driving experience as its range-topping cousin. Of course, you have to make do without the limited-slip differential, but in truth, you don’t need it – the Competizione has easily enough grip to put all that power to the ground, even in iffy conditions.

However, the Abarth 595’s straight-line pace isn’t backed up with rewarding handling, even if you pick the Essesse. Compared with the best hot hatches, which allow you to modify your line through corners with a lift of the accelerator or some well-calculated braking, the 595 feels rather one-dimensional and strait-laced. That said, despite not being the most involving hatch on the market to drive, the 595 can still be hustled down a twisting road quickly.

Granted, on busier road surfaces, some might find the very firm, bouncy ride a bit wearing, but the upshot is that there’s surprisingly little body lean given the 595’s tall and narrow body. Ultimately, the Up GTI is even more capable, though, with better weighted steering, a greater sense of connection to the front tyres and a grippier front end. 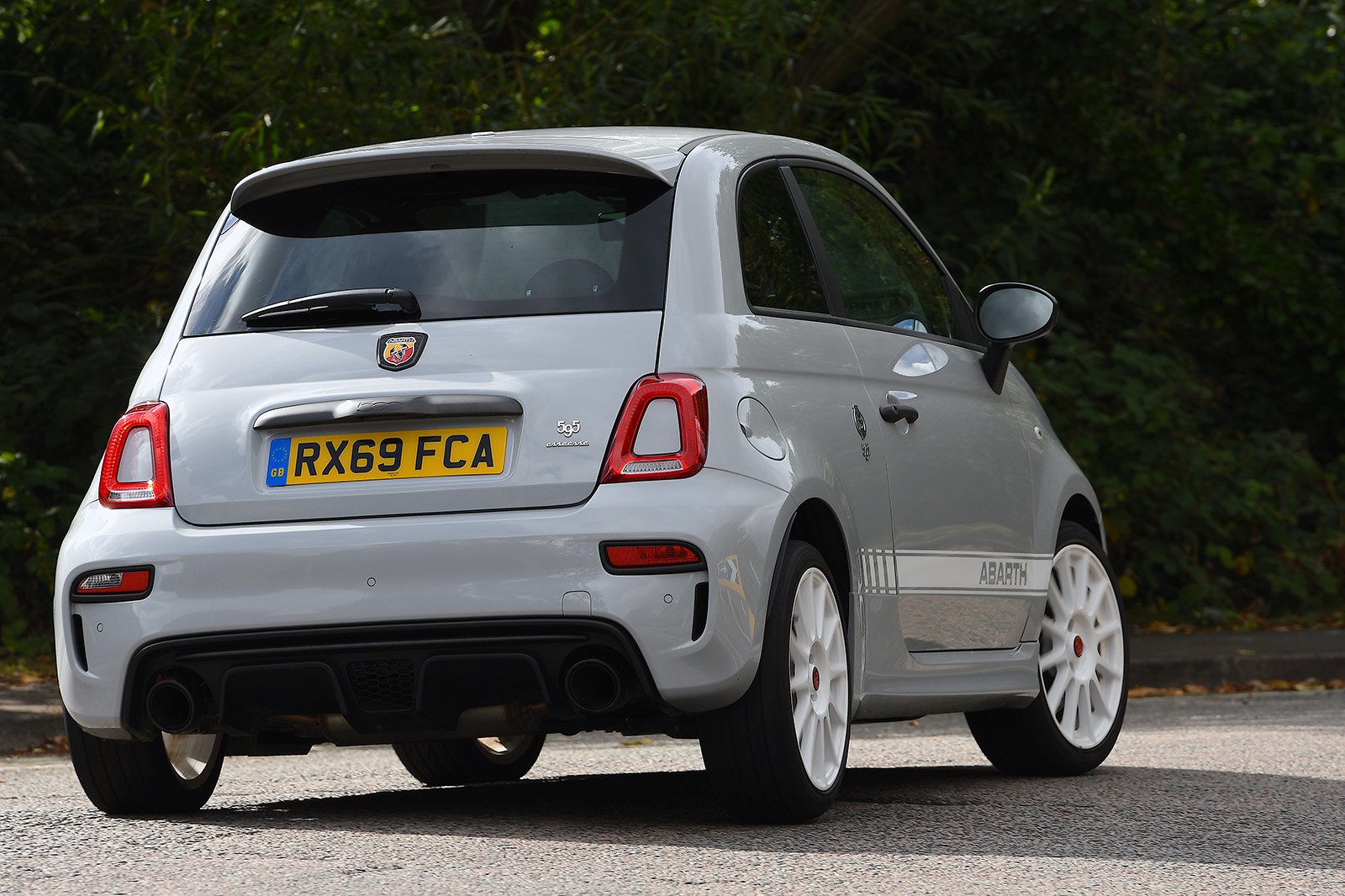