The basic architecture is the same as the Porsche Taycan’s. And that’s great, because it means the relationship between the pedals, steering wheel and seat are spot on. There’s loads of adjustment to modify it as required too.

The e-tron GT comes with a well-bolstered electric driver’s seat (eight-way on the standard car and 18-way with a massaging facility on the RS model). It includes lumbar adjustment but doesn’t feel quite as supportive in the lumbar region as the Taycan’s. However, it’s a much more comfortable workstation than the Tesla Model S’s driving seat.

Joy of joys: this technological marvel is confident enough in its technical marvellousness not to force the issue by littering the dashboard with futuristic but fiddly touch-sensitive buttons. You get real buttons for most things – you know, the sort that are easy to use when you’re doing 70mph along a motorway. You won’t find many of those in a Tesla.

The 12.3in digital screen that houses the e-tron GT’s instruments is extremely clear with a really high resolution, but it’s not a touchscreen like the Taycan’s. Instead you configure it from the steering wheel buttons – something that’s easy to do.

It’s very nice inside and more luxurious than the Porsche. That’s not to say the Taycan isn’t impeccably made – it is, and then some. It’s just that Audi has laid on a bit more to soften the ambience and add to the plushness, including appealing slabs of matt finish wood twinned with flashes of aluminium. The Model S is nowhere by comparison, with materials that feel cheaper and are not bolted down as firmly.

If you don’t want leather, you can choose synthetic and sustainably sourced alternatives made from plastic bottles. As we’ve mentioned, the carpets are made of nylon recycled from used fishing nets. Don’t worry, they’ve been cleaned so you don’t get the whiff of rotting fish.

The Model S strikes back with its infotainment system. The e-tron GT’s uses the 10.1in touchscreen that you get in most other Audis. It’s fine but much smaller than its US rival’s screen, and, if you’re looking for a tally of tech to match the Model S’s, you might be disappointed.

You get the usual – sat-nav, Apple CarPlay/Android Auto (something the Model S doesn’t include) and wireless charging. You can’t stream Netflix or play games in the e-tron GT like you can in the Model S, though. If you enjoy music, the RS e-tron GT has a 16-speaker, 710-watt B&O stereo, which you can option on the e-tron GT as part of the Comfort and Sound Pack.

Visibility isn’t bad at the front, but the windscreen pillars are quite chunky and the window line is high. The rear screen is very shallow and the tapering roofline stops you seeing very much out of the rear corners. 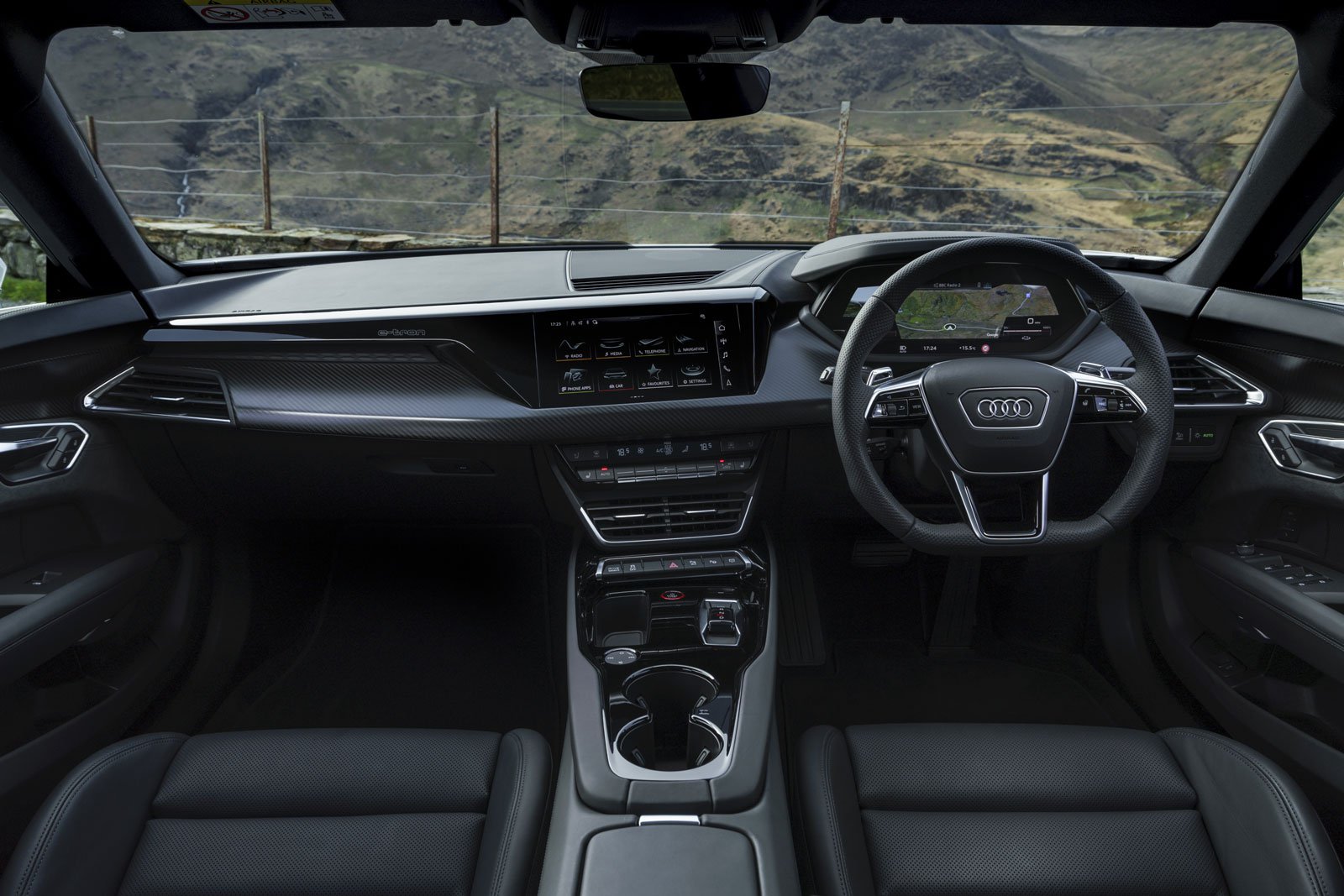