Considering that it’s the entry-level engine, the 197bhp, 2.0-litre  40 TFSI certainly doesn’t feel underpowered. In fact, it pulls hard from low down in its rev range, and its linear power delivery, peppy performance and affordable running costs mean it’s our favourite in the range. However, the front wheels occasionally struggle for grip on slippery roads, because the 40 TFSI is available only with front-wheel drive.

The mid-range 2.0-litre petrol (badged 45 TFSI) is essentially the same engine but with added power, and it enables the TT Roadster to hit 62mph in 6.1sec. Its extra power is mostly found towards the higher reaches of the rev counter, so, while ultimately quicker when worked hard, it won’t make a huge difference in everyday driving. This engine is available with front-wheel drive or Audi’s quattro four-wheel drive system. This really comes into its own when the roads are damp and slippery, allowing rocket-like launches from 0-62 mph in 5.2sec.

The 306bhp, four-wheel drive TTS, with a 0-62mph time of 4.8sec, accelerates quicker than the comparable 718 Boxster. Even that is eclipsed, though, by the range-topping TT RS, which has a turbocharged 2.5-litre five-cylinder petrol engine that produces 395bhp. If that sounds good to you, click here to read that model’s very own review.

Chopping the roof off a car doesn’t usually do its ride comfort any favours, because the whole body tends to become a bit loose and wobbly without a fixed roof to hold things together. Thankfully, that’s not the case at all with the TT Roadster. In fact, it’s remarkably stiff for a drop-top, so going over bumps results in just a tiny amount of scuttle shake – a phenomenon where the bodywork ahead of the driver vibrates and shimmies on rough road surfaces. This is something that pretty much every convertible suffers from to some degree.

The standard suspension (fitted to Sport and S line models) gives a firm but generally comfortable ride, and even the S line’s optional sports set-up doesn’t make things too bumpy. It’s worth avoiding the temptation of large wheels (up to 20in items are available) if you value comfort over sporty looks, because they make the ride much harsher.

Range-topping TTS models come with adaptive suspension that allows you to stiffen or soften the ride. Set in the stiffest mode, ‘Dynamic’, it’s quite bumpy on B roads, while ‘Comfort’ mode turns the TTS into a docile cruiser with well-controlled body movements over bumps and undulations.

The TT RS, on the other hand, is set up 10mm lower than other TT models and goes without adaptive suspension. While that is an option, we don’t reckon you need bother with it, because the standard suspension is firm but never uncomfortable. 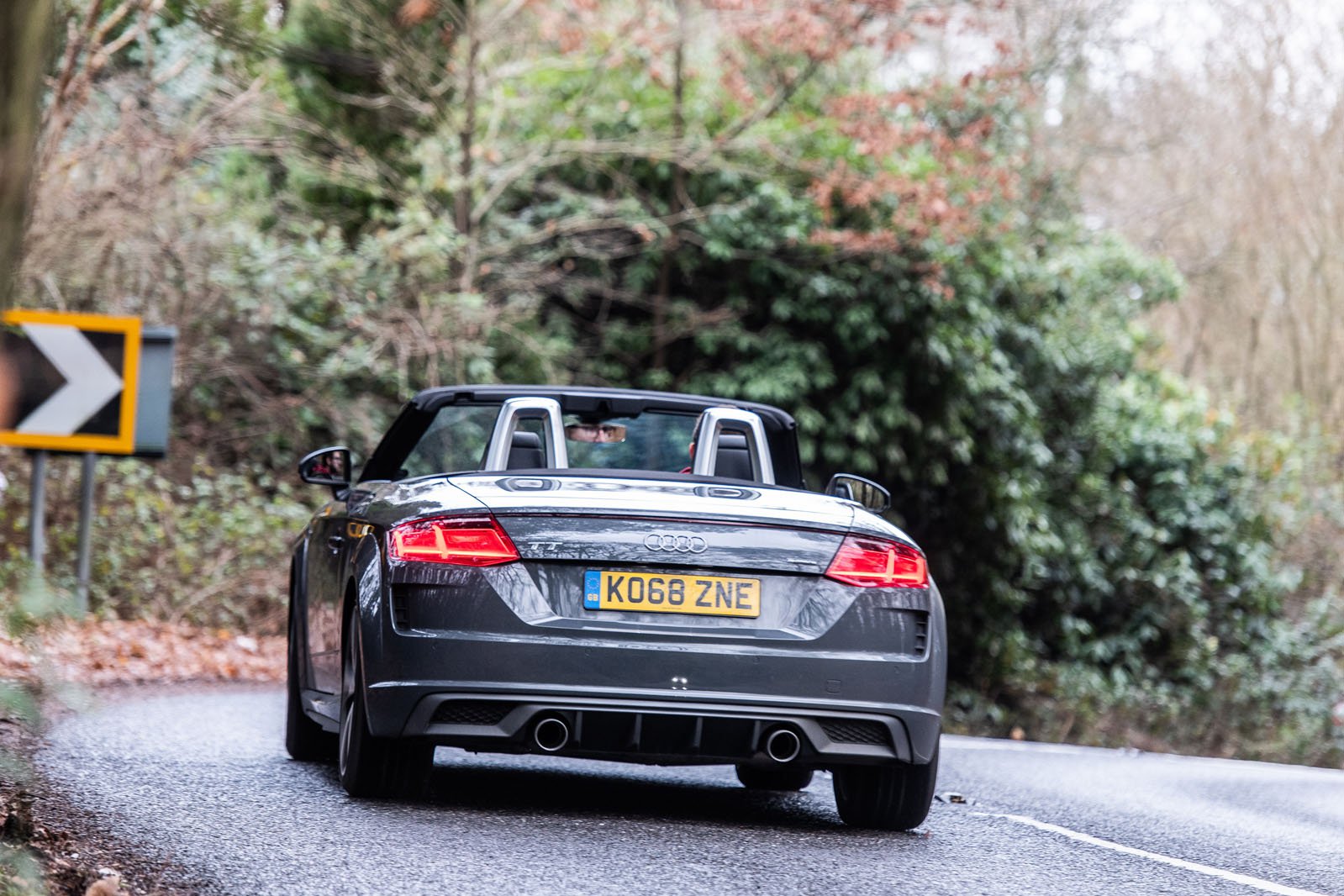 The TT Roadster is lighter than rivals such as the Z4, and it feels it. Turn the wheel and the Audi dives into bends, gripping hard and with barely any body lean – especially in the high-powered TTS with its adaptive suspension and in S line versions equipped with the stiffer sports suspension. The light, accurate steering also gives you plenty of confidence to push the TT hard, and it’s easy to judge whether you need to back off a bit.

In damp conditions, front-wheel-drive TTs can struggle to transfer all of their power to the road, particularly when moving briskly away from a standstill or on the way out of corners. The four-wheel-drive versions are almost unflappable, though.

A two-seat roadster is never going to be as quiet inside as a luxury saloon, and while the TT Roadster shuts out a fair amount of outside noise, you’ll still need to raise your voice a little to hold a normal conversation at motorway speeds. There’s also a constant drone from the tyres and some wind noise from around the frameless windows, but it’s no louder inside than the Z4.

The engines are smooth and hushed at low revs and sound suitably rorty when you work them hard, unlike the decidedly dreary noise the Z4 emits when not fitted with the top-spec engine.

The six-speed manual gearbox has a light and accurate shift, although we’d prefer a slightly shorter action. The S tronic automatic gearbox (standard with four-wheel-drive and optional on front-wheel-drive versions and  the TTS) is generally slick, if a bit jerky when manoeuvring.