What used BMW 5 Series estate will I get for my budget?

How much does it cost to run a BMW 5 Series estate?

The BMW 5 Series Touring is a desirable car, and holds on to its value well, so its second-hand prices are not exactly the most affordable. It's not especially cheap to run, either: most fuel-efficient is the 520d, which returns an official 46.3mpg average; the 525d manages 40.4mpg and the 535d, 34.4mpg.

Petrol versions will hit your wallet harder: best is the 523i at 32.5mpg, while the 525i returns 31.7mpg, the 530i averages 30.7mpg and the 550i returns a lowly 24.6mpg. However, whatever the official figures say, many BMW owners have reported a much poorer fuel economy for their own car.

Insurance costs are high, too, as are bills for maintenance and repairs; labour rates at BMW dealerships are among the highest around. 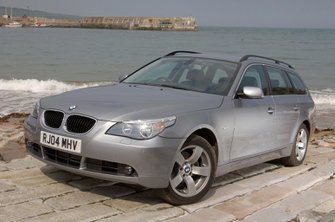