What used Daihatsu Charade hatchback will I get for my budget?

How much does it cost to run a Daihatsu Charade hatchback?

The Charade will cost more than a Daewoo Matiz of a similar age, but it's a better car and cheap as chips. Even relatively young models can be had for very competitive prices.

As you'd only expect from a small car with a tiny engine, it's very good on fuel, too. The Charade will give you an average fuel consumption of 58.9mpg, which is good even for the city car class, and much better than the Daewoo will manage.

Insurance costs are an oddity with the Charade. Three-door models weigh in with a group three premium, whereas five-door models are two groups higher in group five, despite the fact that it has the same engine and power output. Still, neither version will be very pricey to cover.

On the other hand, servicing costs are a bit higher than a Daewoo's, despite the fact that the Charade only needs routine servicing every 12,000 miles compared with the Daewoo's 10,000-mile intervals. 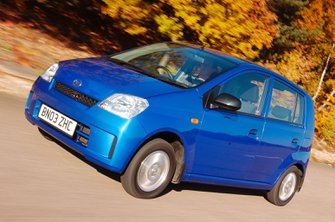