What used Daihatsu Copen sports will I get for my budget?

How much does it cost to run a Daihatsu Copen sports?

When it was new, the Copen was the cheapest car you could buy with a folding steel roof. And, although it loses value fairly slowly - at three years old it is worth roughly half what it originally cost - it's still a cheap way into a convertible.

Owners love them, too, which suggests that, when the few used ones appear on the used market, they may attract a band of enthusiasts willing to pay plenty for good ones.

Fuel economy is another plus, at up to 44mpg overall. Insurance is higher than perhaps you'd expect considering the car's tiny engine, but its group nine listing still makes it cheaper than almost every other two-seat drop-top.

Servicing should be carried out on an annual basis. Its pint-sized turbo motor is best suited to the expert attention we'd expect from a Daihatsu dealer, but the good news is that prices are usually reasonable. Fully synthetic oil is recommended for the engine, however, and that doesn't come cheap. Some spares are also surprisingly expensive. 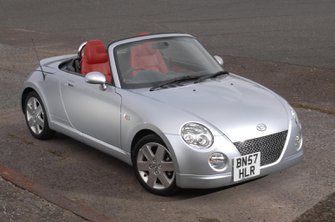