What used Ford Escort hatchback will I get for my budget?

How much does it cost to run a Ford Escort hatchback?

Mostly, the Escort shouldn't be too dear to run. Insurance is cheap because Flights and Finesses all come within group 4. And, while servicing is needed every year or 10,000 miles, it's a job any self-respecting local garage should be capable of. Watch they don't cut corners with cheap oil or brake parts, though.

However, running one may not prove as inexpensive as you'd think. Fuel economy is only average, for example. Expect the 1.6 petrol to return up to 35mpg overall, and the 1.8 about 38mpg, while the diesel is (in theory) capable of 43mpg. However, the Escort's age and poor reliability record suggests you should budget for frequent repairs.

Likewise, while spare parts are usually cheap and the car is straightforward to work on, some jobs take longer or need doing more often than they would on a more modern car. 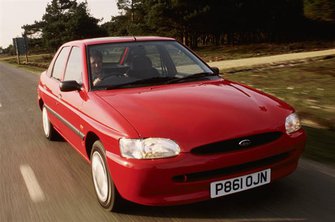