Which used Ford Kuga 4x4 should I buy?

Most used Kugas come with Ford's smooth and punchy 138bhp 2.0-litre diesel engine, which is happy to trundle along in city traffic, but provides a good turn of speed when required. There's also a 163bhp version that's available with four-wheel-drive only. The 2.5-litre V6 petrol engine is fast, but thirsty, and is rare on the used market.

Zetec models come with alloys, air-con, keyless start and MP3 connectivity as standard, while Titanium trim adds automatic lights and wipers, cruise and climate controls, plus a part-leather interior. If you want your Kuga with a full leather interior, look for the rare Titanium X pack. This version also adds a panoramic sunroof, heated front seats and an electrically adjustable driver's seat. Don't pay extra for cars with the optional sat-nav system, because the touchscreen unit is fiddly and awkward to read. 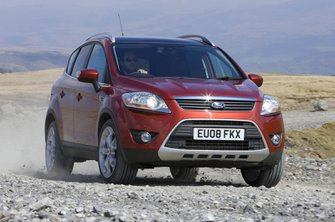