What alternatives should I consider to a used Honda Civic Type R hatchback?

The most obvious rival to the Civic Type R is the Volkswagen Golf R. It’s slightly down on power, but can also boast four-wheel drive, so it has more traction and is easier to drive in tricky conditions. That said, it doesn’t quite have the fluidity or the involvement of the Civic Type R.

A more interesting option if you want four-wheel drive is the Ford Focus RS. Its rear-biased chassis makes it more exciting to drive than the Golf R and it’ll even allow you to set up lurid four-wheel drifts – obviously, that's best practised away from the public road. It’s also devilishly quick, but it is spoiled by a high driving position and a plasticky interior.

For something a little classier, how about the BMW M135i or its successor, the M140i? Both cars are rear-driven, making them very playful to drive, and with their creamy-smooth six-cylinder engines they pack a huge punch. A smart interior and subtle styling mean they’re less overt than the Civic Type R, too. 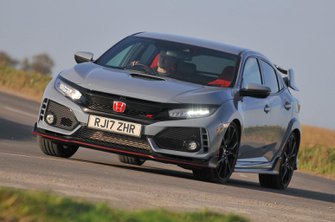