Which used Honda Shuttle estate should I buy?

Early Shuttles were powered by a 2.2-litre petrol engine, but this was replaced with a 2.3-litre unit in February 1998. Both get raucous when worked hard, so the stronger 2.3's extra flexibility is worth having if your budget will stretch to it.

Unusually, no diesel engine was offered and the only gearbox is a four-speed automatic. However, this shifts slickly and is rarely caught in the wrong gear.

There are three trims to choose from, with basic LS cars getting air-con, alloy wheels, an electric sunroof, driver and passenger airbags and anti-lock brakes.

The mid-spec ES is our pick because it adds an engine immobiliser to stop all but the most determined thieves driving it away. You also get seven seats to the LS's six and the convenience of central locking.

Finally, there's the flagship ES Executive model. Introduced in 1999, it brings luxuries including leather upholstery and a CD multichanger. 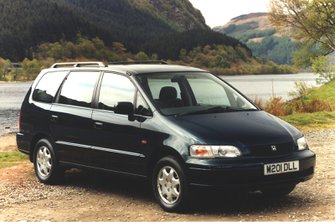