Which used Hyundai Coupe coupe should I buy?

The 1.6-litre version has the same looks, but you'll be left hanging about at the lights. The 112bhp engine is largely unloved and regarded as nothing more than adequate. Either engine with an auto gearbox will be greeted with derision from future buyers, so steer clear. In 1998, the F2 2.0 Limited Edition arrived, thanks to the efforts of Britain's Alister McRae, who really put the Hyundai Coupe on the world rallying map. It has a mesh front grille and chrome sill treads. A year later, a more hairy 154bhp model made its entrance with ivory-coloured dials and uprated alloy wheels. The car was face-lifted in 2000 with a new twin-headlamp nose, larger rear light clusters and a smoother bonnet. A new 1.6 SE with air-con, 15-inch alloys, leather seats and CD was added, and a 2.0-litre SE came with a manual or auto gearbox. For purists, though, the early 2.0-litre models are the only choice. 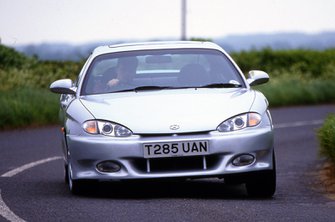