Which used Hyundai Santa Fe 4x4 should I buy?

A 186bhp 2.7 V6 petrol model and a 148bhp 2.2 CRTD diesel were available from launch, but despite its power advantage, the petrol model isn't much faster. The diesel unit has plenty of grunt, giving the car decent acceleration. So, with its impressive performance and noticeably better fuel economy, the diesel is the one to buy.

The entry-level GSI model is well equipped, with 17-inch alloys, air-con and electric windows all round. It also comes with six airbags (eight in the seven-seater), but doesn't have electronic stability control fitted. It's worth looking for the CDX model, because it comes with climate and cruise controls, a leather interior and upgraded alloys.

The Seven-seat version is far more desirable on the used market, and prices reflect this. However, it's worth spending the extra money for the added practicality. From mid 2006, the diesel engine had a power increase from 148bhp to 155bhp, yet CO2 emissions fell by 2g/km.

Towards the end of 2009, the Santa Fe underwent a series of revisions and improvements. 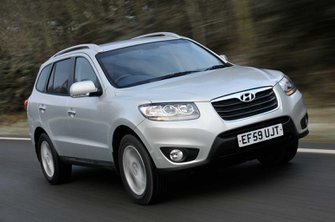