What used Jaguar F-Type sports will I get for my budget?

A budget of just over £30,000 will get you into a three-year-old F-Type Convertible with less than 60,000 miles on the clock. In fact, some cars at this price point haven’t even passed the 20,000-mile mark yet.

If you’d prefer an F-Type with four-wheel drive, you’ll be looking at spending at least £55,000 for a car built from 2015 onwards.

The SVR model, meanwhile, is £85,000 and upwards, with these cars tending to come from Jaguar main dealers. That’s no bad thing, though, since Jaguar’s Approved Used warranty lasts for two years, no matter how many miles you do.

How much does it cost to run a Jaguar F-Type sports?

When looking at an F-Type, it’s worth considering whether it was registered before or after 1 April 2017. That’s when rates of road tax changed, and it can make a difference to how much you’ll pay.

If you are looking at a V6, you’re better off buying a car built before that date, because you’ll pay no more than £305 per year in tax. Choose a car built after 1 April 2017 and the amount jumps to £450 per year until the car is six years old, after which it drops to £140 per year (blame the tax premium for cars costing more than £40,000 for that).

In terms of fuel economy, you might just see 30mpg from the V6 versions if you’re gentle, but that’s still a good deal better than the V8, which struggles to do much more than 20mpg.

Services cost between £380 and £550, assuming no other work needs doing, although it’s worth bearing in mind that a lot of F-Types will still have the remainder of Jaguar’s optional five-year service plan left to run. 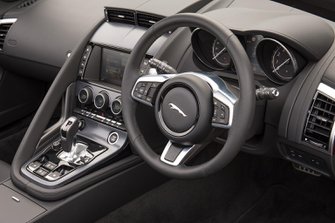