As we mentioned above, the Huracán is a fully fledged supercar, but hasn’t always felt as red-blooded as it might. The Huracán Evo, though, aims to put that right, and does so with technology that includes rear-wheel steering and torque vectoring. Those systems - along with the existing dynamic steering, magnetic dampers, stability control and engine - are all integrated into one central brain, called Lamborghini Dinamica Veicolo Integrata (LDVI). The idea is that the various systems work in harmony to deliver the most responsive Lamborghini to date.

The great news is that you won’t be disappointed, whether you go for the rear-wheel-drive or four-wheel-drive version.

Of course, with up to 631bhp, that high-revving V10 engine dominates the car, pulling with real gusto from low revs as it rips towards the 8500rpm redline. Sure, you don’t get quite the explosive (if more short-lived) hammer blow of acceleration of turbocharged rivals such as the McLaren 720S, but we reckon the more progressive, elastic delivery of the Lambo's V10 is even more intoxicating.

The Huracán is quiet enough not to drive you mad when you’re on a steady throttle, but let it rev – particularly if you’ve switched the variable drive modes to the fully rampant Corsa – and it becomes a raging, popping and crackling symphony of exhaust noise. Any supercar fan is going to revel in that thrilling, addictive soundtrack.

The seven-speed dual-clutch gearbox is also meticulously well sorted, shifting smoothly and with quick-fire precision just when you want it to, even if it can lurch a bit when engaging a gear at very low speeds. For fast driving, you’ll get more satisfaction from using the steering wheel-mounted paddles to change gear manually.

All Lamborghini Huracáns feature the delightfully named ‘Anima’ switch, which allows you to toggle through drive modes and vary throttle, exhaust noise, gearbox ferocity, steering weight, traction control and – if you’ve added them – the optional variable dampers. Even in the most relaxed Strada mode, the Huracán feels appropriately sharp, but most owners will favour mid-level Sport, when everything steps up a notch and makes the Huracán feel properly incisive.

And, thanks in part to that LDVI system the Evo responds willingly to your inputs, wheras the first generation Huracán always felt like it was trying to keep you safe rather than give you the no-holds-barred supercar experience you get from a Ferrari F8 Tributo or McLaren 720S. Give the throttle a boot mid-corner and the four-wheel drive system – which has been tweaked to be rather more playful – will send the majority of the power to the rear wheels, allowing you to gracefully slide the rear end.

It never feels like it’s going to bite you like a 720S, though, assuming you show it some respect. The RWD model, though, needs to be approached with caution; with all of its power going to the rear wheels all of the time, it’s easy to get the tail wagging on the exit of corners, and if you’re not quick with your inputs it can quickly get away from you. In short, it feels like a proper, occasionally spiky Lamborghini of the old school.

The only real disappointment is that its steering doesn’t communicate grip levels and information about the road’s surface as well as the Porsche 911 or McLaren 570S. And that’s true of the RWD model, too.

The Huracán’s steel brakes offer good stopping performance and lots of feel, but if you plan on taking your car on track, you might want to upgrade to the optional carbon-ceramic stoppers. These offer much the same stopping performance as the standard brakes, but will resist fade for longer during bouts of fast driving. Just be aware that they introduce a rather firm pedal feel and are harder to modulate around town. 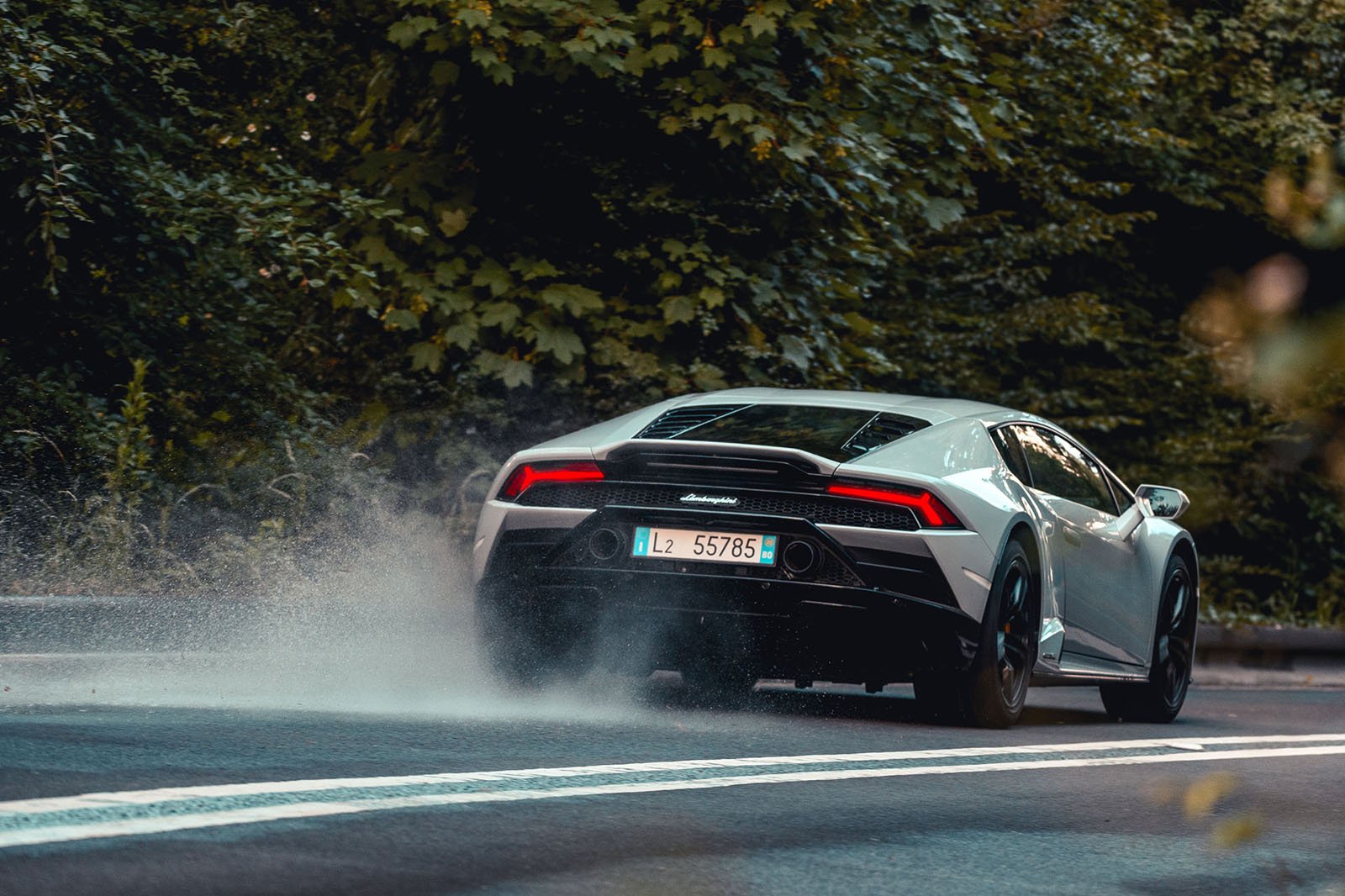