The Huracán Spyder exudes the same sense of drama as the coupé, including its interior. In the centre of the snug interior there’s a red, fighter jet-style starter button that complements the angular design of the switchgear, which in turn mirrors the car’s edgy exterior design. Even the steering wheel’s centre boss has the distinctive hexagonal design that’s continued in the air vents, driver’s binnacle and trim design.

The all-digital dials are easy to read and the switches, while a little too numerous, are mostly easy to understand. The infotainment system is controlled via a rotary dial and viewed through the driver’s readout – this takes some getting used to. In time, though, this becomes quite intuitive and it’s great to have all the information – navigation, media and speedo – right in your eye line. That said, compared with more modern systems such as the one in the Audi R8 Spyder, it feels rather below par.

The standard electrically adjustable seats are comfortable and very supportive; you don’t need to add the more hardcore bucket seats that give some drivers backache. Rear visibility is near-non-existent, but many will accept that as a reasonable price to pay for a roof that folds or raises automatically in 17 seconds at speeds of up to 31mph.

The engine is quiet enough not to drive you mad when you’re on a steady cruise, but if you let it rev – particularly if you’ve switched the variable drive modes to fully rampant Corsa mode – it’s a raging, popping and crackling symphony of exhaust noise. Any Lambo driver is going to revel in that thrilling, addictive soundtrack.

Wind noise is quite acceptable with the roof up, while roof down you’re well protected from bluster. Road noise is more noticeable at higher speeds, but in the context of this car overall refinement is very acceptable. 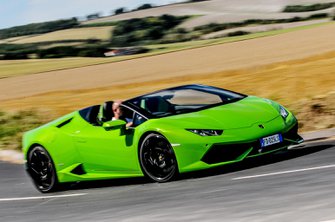 The Lamborghini Huracán is a theatrical masterpiece that deliv...