The Land Rover Defender’s starting price is broadly in line with those of similar off-road-oriented alternatives, including the Jeep Wrangler and Toyota Land Cruiser, along with premium large SUVs like the Audi Q5 and BMW X3. However, venture higher up the range and the Defender's price overlaps with those of many luxury SUVs, such as the larger Audi Q7 and Land Rover Discovery.

If you're a private cash buyer, the Defender's exceedingly slow predicted depreciation should help keep long-term costs respectable, while PCP finance rates are competitive. Check out the latest deals over at our free New Car Deals service.

The Land Rover Defender will prove more expensive to fuel than many alternatives, even in its most economical P400e plug-in hybrid and D200, D250 and D300 diesel forms. At least the official 32.6mpg for the D250 we tried seems to be reasonably achievable by a regular driver in everyday driving. Company car tax bills will be steep: every diesel model emits over 230g/km of CO2, and the 19% benefit-in-kind (BIK) rate of some variants of the P400e will make them costlier for business users than many other plug-in hybrids. 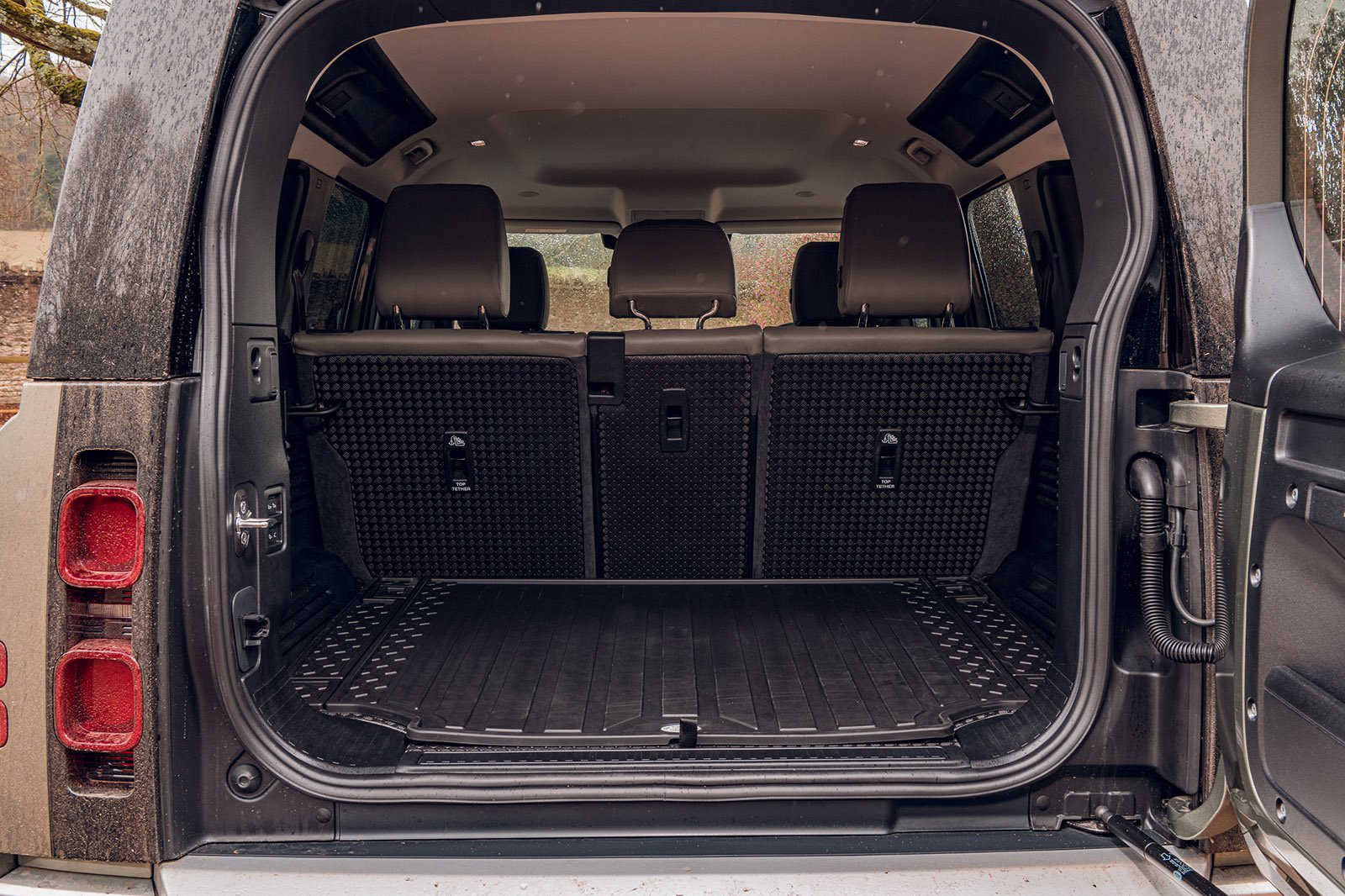 All Land Rover Defenders come reasonably well equipped, so we reckon you can stick with the entry-level model and perhaps add a couple of options of your choosing. S is worth considering if you want alloy wheels and a slightly swankier interior, while SE adds useful extras such as keyless entry.

Pricier trims (HSE and upwards) are not worth the money unless you like loads of leather inside or a panoramic roof. If you're after luxury, though, we'd argue that similar-priced, road-biased luxury SUVs such as the Audi Q7 and BMW X5 make more sense.

In addition to the trim levels, buyers can also choose from four design packs to further customise the look of the Land Rover Defender. Some are more city orientated and add glitzy 22in wheels; others are off-road inspired with features including a ladder, roof rack and off-road tyres. There's even a satin protective wrap for the bodywork; this protects the paintwork from scratches when off-roading.

This isn’t an area of strength for Land Rover. Indeed, the brand finished rock bottom (out of 31 manufacturers) in the What Car? Reliability Survey.

Fingers crossed that this latest Land Rover Defender will break the mould and prove considerably more dependable than its brethren but, realistically, be prepared for some form of reliability issue and the need to call on its three-year, unlimited-mileage warranty. That warranty, by the way, is not as long as you get with some large SUVs, most notably the Kia Sorento, which comes with a class-leading seven-year warranty.

Euro NCAP awarded the Land Rover Defender five stars (out of five) overall in its crash tests, but if you look at the individual categories, it doesn't score as highly as the XC90 or Q7 for adult or child protection. That said, it is significantly safer than one star Wrangler.

All trim levels come with active safety gizmos designed to prevent you from having an accident, including lane-keeping assistance, traffic sign recognition (displaying the current speed limit on the dashboard) as well as automatic emergency braking (AEB), which automatically hits the brakes if it senses that a collision is imminent. It can even recognise pedestrians and cyclists.

Upgrade to SE trim and you also get blindspot monitoring, a clear exit monitor (to warn if you're about to swing open the door into the path of a cyclist) and rear cross-traffic alert, which warns you of approaching vehicles as you're reversing out on to a road. Meanwhile, range-topping HSE trim gets a dedicated Driver Assist Pack that, among other things, brings adaptive cruise control. This pack is optional on lower trims. The outermost second-row seats in all Land Rover Defenders have Isofix mounting points, but you'll need to go for SE trim or above to get Isofix on the front passenger seat.