Fans of the previous Land Rover Defender will love the latest car's lofty driving position, which feels significantly higher than most of its rivals. It’s easy to set everything up just the way you want it, too, with eight-way part-electric seats on the entry-level trim and 12-way electrically adjustable seats fitted from S trim. SE trim adds memory settings, to recall your ideal position, and HSE gets 14-way adjustment.

Whichever trim level you choose, the pedals, seat and steering wheel are positioned well, relative to each other, and there’s lots of up, down and in-and-out movement to the steering wheel. That is electrically adjustable from SE. Our only criticism of the seat is that it doesn't have much side support to stop you sliding sideways in tight corners

The Defender’s dashboard is very much fit for purpose, too, with chunky buttons that you can operate even while wearing gloves. With entry-level trim, you'll get analogue instrument dials, but if you move up to S trim they are swapped for clear digital instruments that you can configure to display information in a variety of ways. The menus aren’t quite as easy to work through as they are with the similar Virtual Cockpit system in the Audi Q7, though.

Thanks to the Defender’s boxy proportions and high driving position – and despite its substantial exterior dimensions – it’s relatively easy to judge the outer extremities when you're threading it through car parks or along narrow country lanes. The rear-door-mounted spare wheel (and in the longer 110, the sheer distance from the driving seat to the rear window) does makes it tricky to see out of the back, though. Thankfully, all models get front and rear parking sensors plus a 360-degree camera as standard.

If you pay a bit extra, you can specify the Clear Sight rear-view mirror. At the touch of a button, it becomes a digital screen that shows a live camera feed from directly behind the car, so you can still see what's behind even when the boot is loaded to the roof. LED headlights are standard on all versions, and stepping up to HSE trim gets you adaptive matrix LED headlights, which can be left on main beam without dazzling the drivers in front. 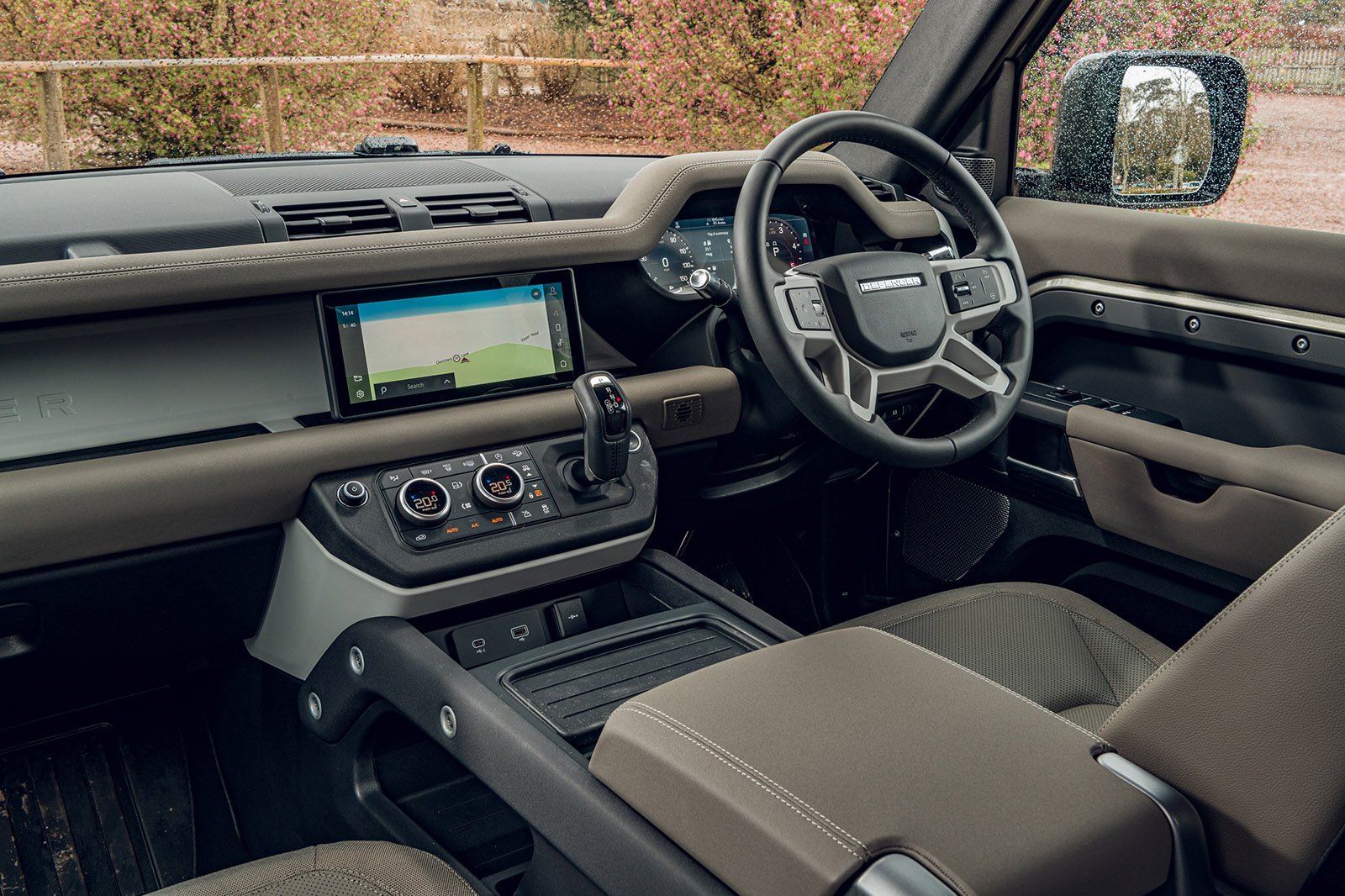 The Defender features Land Rover’s latest infotainment system. The 10.0in touchscreen responds swiftly most of the time, the screen is crystal clear and the graphics look quite impressive, too. There’s also lots of functionality, including standard Apple CarPlay/Android Auto phone integration. For a small amount more, you can upgrade it to a larger 11.4in screen that sits proud from the fascia, and is therefore a little closer to the driver.

As touchscreen systems go, it's one of the best in the class, and certainly far better than anything you get in the Jeep Wrangler. It even pips the Volvo XC90 system. We'd still prefer the option of having a rotary controller rather than a touchscreen, like the dial in the BMW X3 and X5. They're less distracting to use while you're driving.

If you opt for SE trim, the standard stereo is upgraded to a 10-speaker, 400-watt Meridian sound system. With X trim, you get an even more advanced stereo with surround sound, 700 watts and 14 speakers.

Land Rover has taken a back-to-basics approach with the Defender’s interior design – and it's worked. Certain structural elements are deliberately exposed, including the front crossbeam that functions as part of the dashboard and also as a passenger grab handle. There are loads of exposed bolt heads dotted around the interior, emphasising the Defender's characteristically utilitarian feel, and most of the surfaces you touch are covered in a rugged-feeling rubberised material.

Crucially, everything seems solidly made and bolted together tightly, yet, while many of its more road-focused rivals have plusher interior finishes, the Defender still manages to feel reassuringly expensive. Weaknesses? Well, the dashboard buttons and electric window switches don’t operate with quite the slick precision that they do in the best German rivals.