The diesel versions of the Land Rover Defender use the same 3.0-litre six-cylinder engine with mild hybrid assistance, which helps smooth out their power delivery and increase efficiency. The mid-range 246bhp D250 is the pick. It has more than enough low-down pull for effortless in-gear acceleration (on or off-road) and it'll do 0-62mph in as little as 8.0sec. That makes the more powerful 296bhp D300 seem like overkill, but if you're on a budget, the 197bhp D200, which will do 0-62mph in around 10sec, is worth considering.

Petrol power starts with the P300. It’s a four-cylinder 2.0-litre with 296bhp, which is plenty, but it needs revving hard to make swift progress. It's the only version without mild hybrid assistance. The 296bhp P300 and 395bhp P400 are both 3.0-litre six-cylinder engines capable of a decent turn of speed, but they still require more revving than the diesels in everyday driving. The fastest Defender is the exorbitantly priced P525 V8 petrol. Its 0-62mph time of 5.2sec isn't far off the Mercedes-AMG G63.

Lastly, there's a plug-in hybrid. It's called the P400e and uses the 2.0-litre petrol (from the P400) coupled with an electric motor. Together they produce 399bhp, which is good enough for 0-62mph in 5.6sec and an official electric-only range of 27 miles. It's pretty expensive and is only available with the longer 110 body. The P400e can tow up to 3000kg (that's a lot for a plug-in hybrid), while the other Defenders tow up to 3500kg.

The longer Defender 110 has air suspension fitted as standard. With 19in or 20in alloy wheels (18in wheels are standard on the entry-level trim) and off-road tyres fitted, it does a reasonable job of taking the sting out of bigger urban abrasions. In fact, it's more comfortable and shudders less than the Volvo XC90, but it's not a patch on the ultra-supple Audi Q7.

The Defender 90 has regular suspension as standard (air suspension is optional) and even this isn’t uncomfortable. Serious wrinkles are dealt with well but it jiggles around more than the longer 110 over surface imperfections. Adding the air suspension helps reduce that.

It's not up there on comfort with the best large and luxury SUVs, but without a doubt it's the best-riding of the proper, off-road-biased SUVs. The Defender is much smoother in town and on the motorway than any Jeep Wrangler or Toyota Land Cruiser. 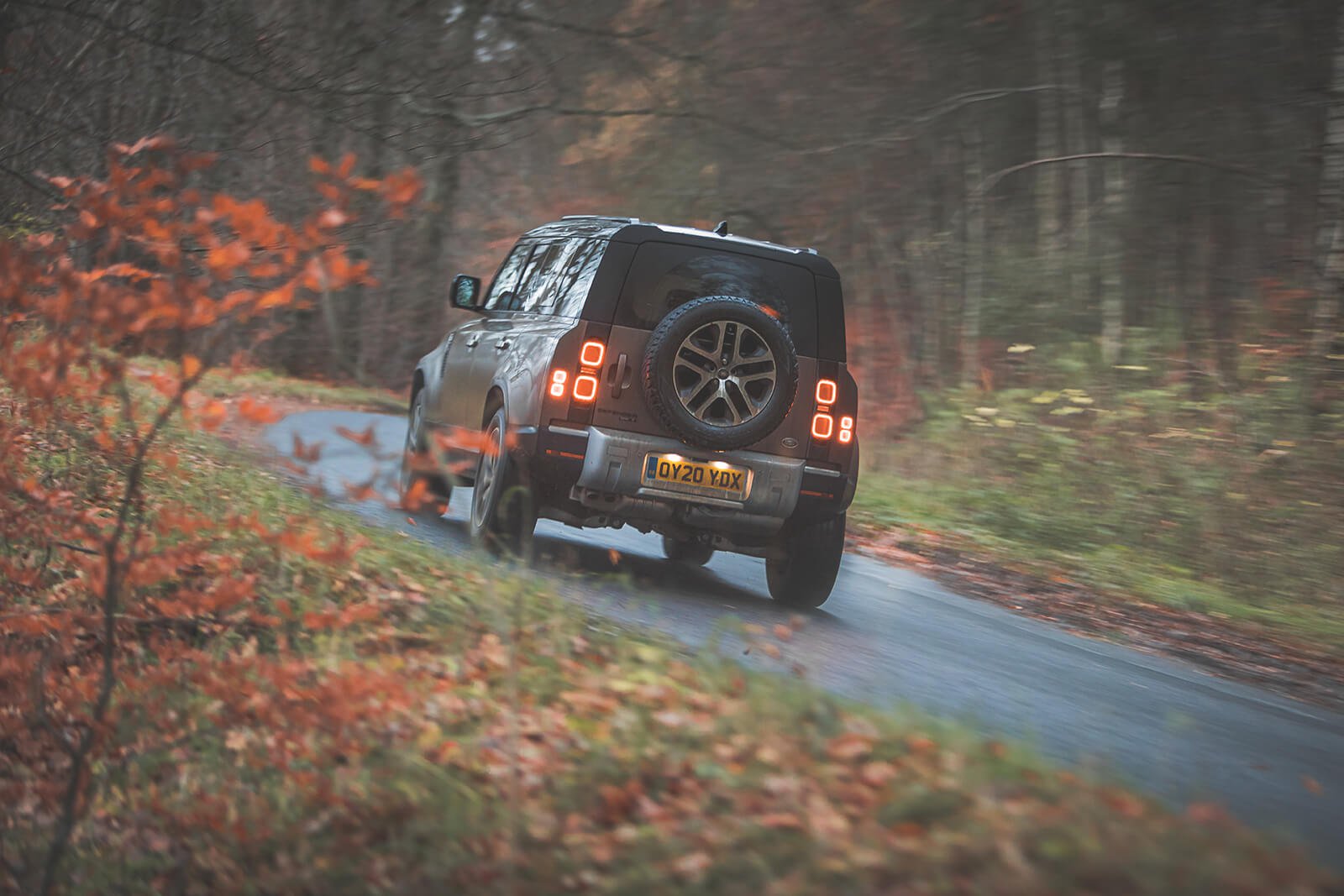 The Defender isn't as unwieldy on the road as its tall body might lead you to believe, but you can’t rush it down a winding country road in the way you can some road-focused SUVs, including the Audi Q7 and BMW X5. The smaller, lighter 90 feels a bit more nimble than the longer 110, but both sway around a fair bit through tighter bends and don't have a great deal of grip – even in the dry – with the optional off-road tyres fitted. The steering is also slow and doesn't give much sense of connection to the front wheels. On the plus side, it’s light and reasonably accurate.

What about its prowess on the rough stuff? Well, the Defender’s ability to carry on when the going gets tough is impressive and easy to make the most of. The Terrain Response system makes it simple to set the car up for different conditions and, with the car in its highest off-road suspension setting (provided air suspension is fitted), it powers over deep ruts and climbs up muddy hills with relative ease.

The shorter 90 has a tighter turning circle and a better breakover angle (the sharpest angle it can drive over without bottoming out), which certainly helps on challenging terrain. Keen off-roaders will want to tick the box for the optional air suspension to maximise ground clearance (air-sprung models can jack themselves up automatically by an extra 70mm if the car thinks it's about to scrape its underbelly). We’d also recommend the optional locking rear differential that provides extra traction on slippery ground. Indeed, with it fitted, the Land Rover Defender gets close to the Jeep Wrangler for ultimate off-road ability.

Although the Defender looks like it has the aerodynamics of a brick, wind noise at motorway speeds isn't too bad. There's more gusting around the windscreen and door mirrors than you get in the Q7 or X5, but road noise is relatively subdued.

None of the engines produce much noise at cruising speeds or send disturbing vibrations through the steering wheel. In fact, the diesel engines are pretty quiet – not just compared with the noisy Wrangler diesel but also some of the road-biased SUV diesels, too, including the Volvo XC90. The P300 petrol sounds a little wheezy at high revs, while the P400 has a fake-sounding augmented engine note pipped through the stereo.

Of particular note is the mild hybrid technology that incorporates the start/stop system. It can restart the engine in traffic without you feeling a shudder. The P300 alone misses out on that feature, so it's a bit jerkier on start-up. Every Defender has an eight-speed automatic gearbox that shifts smoothly most of the time.