Which used Lexus IS saloon should I buy?

Go for a 2.0-litre model with SE trim. The smaller engine has enough power, and is a better match for the car's abilities than the much more powerful 3.0.

The entry-level model is badged as an S and well kitted out, including air-con and alloy wheels as standard, but the SE adds leather seats and, on later models, sat-nav - all desirable stuff. The Sport matches these equipment levels, but adds bigger alloys, skinny tyres and a stiffened suspension, which combine to ruin the ride.

The 3.0 has an automatic gearbox as standard, but the 2.0 can have a choice of that or a six-speed manual. Either transmission is good.

The car kept its original handsome lines without a major face-lift throughout its six-year life, but equipment levels were steadily raised over time, so that the last of line had everything you could think of. All of which translates into a simple instruction: buy as new a car as you can. 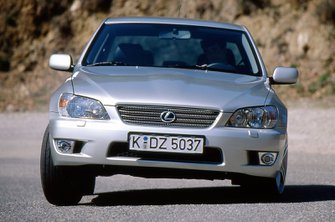