The V8 in the is the best engine option for the Lexus LC 500, but not a perfect one. It is strong at high revs – with a wonderful sound at the top end – and a lot of fun when you want it to be, but feels a little short of torque to move this two-tonne car as effortlessly as you’d like if you put your foot down at low revs. A 0-62mph time of 4.7sec attests that this is a quick car, but it can’t match the Jaguar F-Type R or BMW 8 Series M850i, both of which will dispatch the same sprint one second quicker. In part, that’s because both of those rivals have four-wheel drive that helps to put their power down from a standstill; the rear-wheel drive LC can struggle to deploy all of its power on a standing sprint.

The LC 500h offers alternative engine choice in the form of a V6 hybrid. It’s more economical, but the way it transitions between electrical assistance and engine power isn’t always that smooth, especially when you’re pushing on. It sounds far more subdued than the V8, too, which is relaxingly hushed at low speeds but always ready to crank up the drama in the exhaust note as you increase the speed. And Lexus’s attempt to make the 500h more exciting by filtering imitation engine noise through the stereo speakers becomes irritating after a while. Things aren’t helped by the whine of the electric motors that augment the V6 up front.

Plus, although the hybrid is only a little slower than the V8, covering 0-62mph in 5.0sec, it isn’t as dynamically exciting as the 500due to the extra weight of its batteries and electrical system. It’s not in a straight line where you notice the extra weight, but when cornering, where the 500h is less willing to change direction than its sibling. As a result, the 500 is the more entertaining car to drive on a flowing road.

The LC’s steering is rather light and disappointingly short on feel, but opting for the top-spec Sport Plus Pack gives you a different steering setup that can vary its directness depending on your speed. It also adds a rear-wheel steering system and a limited-slip rear differential that helps transfer power to where it’s needed. With these fitted, the LC feels more agile and better tied-down in bends than the standard car. Still, it doesn’t match the dynamic ability of the Porsche 911 or BMW 8 Series. Being neither quite as balanced nor as engaging through bends.

It is very easy to manoeuvre this big car at low speeds, though, and in more subdued driving, the LC is a decent companion. Fitted with run flat tyres as standard, the LC’s ride can feel a little wooden over really testing lumps and bumps, especially around town. Thankfully, it gains better fluency at higher speeds, but you’re always aware of road imperfections – although they never become uncomfortable. It’s very quiet at low speeds and nicely hushed at higher speeds, but the LC is rather short of the smoothness and refinement you expect from a long-distance GT car.

The LC 500 V8 has an automatic gearbox with an almighty 10 speeds; this might sound like a gimmick, but it works well when left in its automatic mode. You’re wise to use the steering wheel-mounted paddles and revert to manual mode for more spirited driving, but it gets tricky keeping track of so many intermediate ratios. The Hybrid LC 500h, meanwhile, uses 10-speed CVT gearbox that’s smooth around town and does a fairly good impression of a conventional automatic at a cruise, but once you start to push on, the revs flare and the V6 sounds rather coarse.

That said, the hybrid is worth considering if you are buying the car based solely on its long-distance GT credentials. Its range on a full tank will be greater than the V8’s, thanks to the improved fuel economy – and you can read more details on that in our Running Costs section of this review. 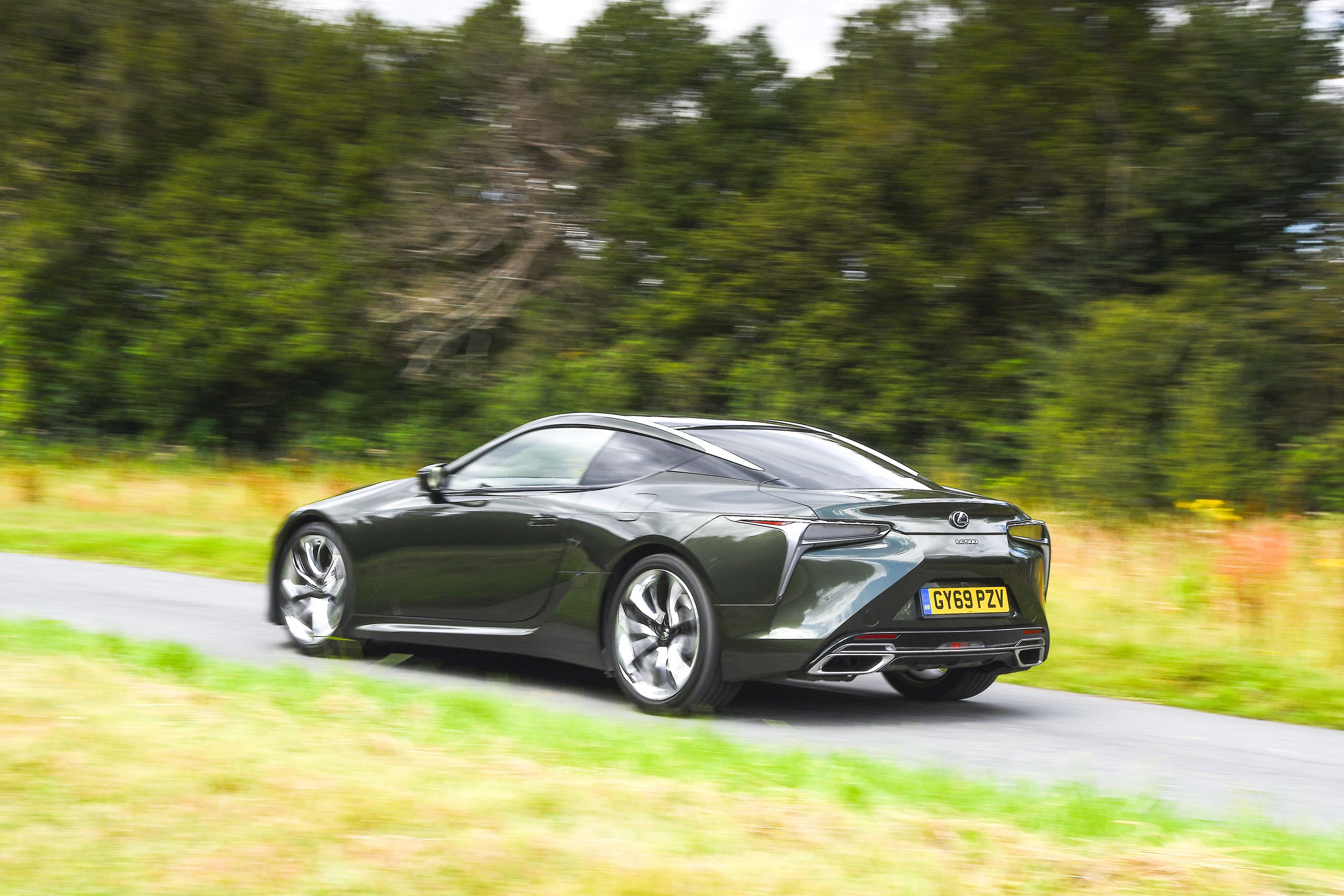