These days, the Mercedes C-Class has a seriously tough job on its hands. It may be one of the most established names in the executive car class, but it has to compete with a broader spread of rivals than ever before.

For decades, it's faced off against the Audi A4 and BMW 3 Series and continues to do so today, but there are also plenty of other upmarket saloons to choose from, including the Jaguar XE and Volvo S60.

And that’s not the end of it, because if you aren't overly fussed about a posh badge, some mainstream alternatives, including the Volkswagen Passat and Skoda Superb, seemingly offer more for less. The all-electric Tesla Model 3 is also likely to be on the radar of many potential buyers.

So, why might you choose the C-Class? Well, other than the way it looks and its glitzy interior, there are certainly lots of engines to choose from, ranging from a relatively model 1.5-litre petrol (called the C200) right the way up to a roaring 503bhp V8. We cover the latter in detail in our separate C63 AMG review, but over the next few pages we'll walk you through the other engines worth considering, including the spectacularly efficient C300 e and C300 de plug-in hybrid models.

We'll also tell you which trim levels make the most financial sense and explain the car's strength and weaknesses. And when you're done researching, head over to our New Car Buying service to find out how much you could save on any new car, including the Mercedes C-Class.

There are so many engines options that you could easily become bewildered – but there's no need to be. It's simple: if you're a company car driver, go for one of the plug-in hybrids, which are called the C300 e (petrol) and the C300 de (diesel). The reason these engines make so much sense for company car drivers is because of their low CO2 emissions, but they're also really quick and can hit 60mph from a standstill in less than six seconds. Fully charge the battery and you'll also get 25-30 miles of pure electric driving in real-world conditions.

If you're buying privately or on PCP finance and you aren't fussed about rapid acceleration, the 191bhp 2.0-litre diesel engine (badged C220d) is well worth a look. It pulls well from low revs to make overtaking effortless. We'd avoid the mild hybrid C200 petrol because it never really feels as fast as its official performance figures suggest.

Although Sport and, to an even greater extent, AMG Line models follow the contours of the road more closely, unwanted body movements are also more tightly controlled. In our opinion, this actually gives a more comfortable ride the majority of the time. However, there's no doubt that the Audi A4 and the best versions of the BMW 3 Series still do a better job of isolating you from lumps and bumps in the road.

The C43 AMG has bespoke suspension to help it go round corners even better, and while you wouldn't describe the ride as 'plush', comfort isn't half bad by performance saloon standards. 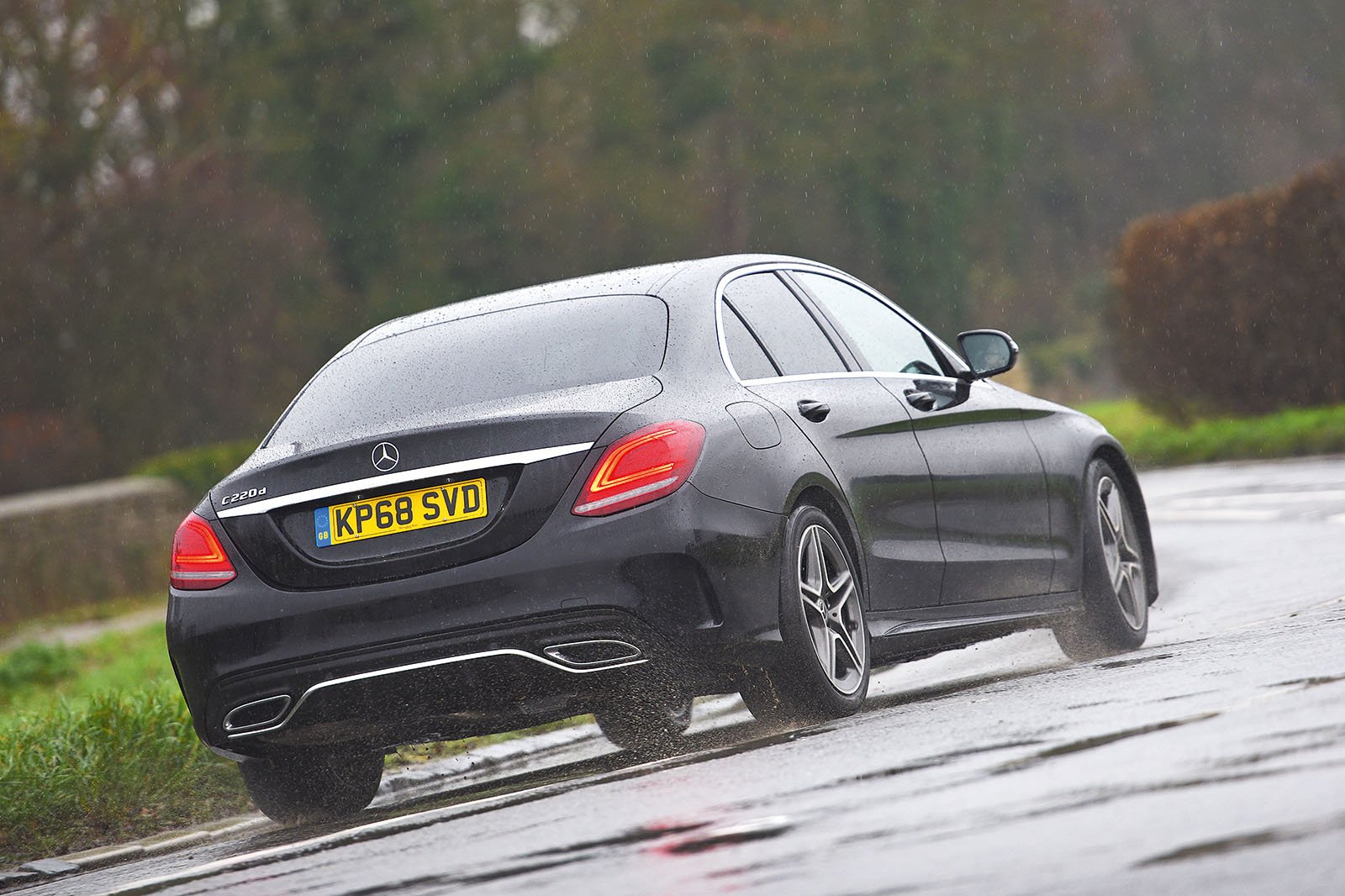 The C-Class is far from the driver’s choice in this class. While grip levels are fairly high, the steering doesn't feel very naturally weighted, which robs you of confidence. SE and Sport versions also sway around a fair bit through tight twists and turns.

In short, if you want an executive saloon that will really put a smile on your face, the 3 Series, Jaguar XE and Alfa Romeo Giulia are all better buys.

With its stiffer suspension and quicker steering, the C43 AMG feels more alert than regular versions of the C-Class, and four-wheel drive makes its performance usable whatever the weather. It still isn't as rewarding as the best performance saloons, though. The range-topping C63 AMG is a different beast entirely, which is why we've given it it's own separate review.

This is the area where the C200 really disappoints. Even when you’re cruising along, the engine transmits a noticeable hum and even a little vibration into the car. Accelerate hard and the engine gets even more vocal, interrupting conversations with passengers. The engine can switch off when you’re coasting but, as soon as it fire back into life again, the noise returns.

The C220d is better; in fact, when you’re coasting or cruising along, it’s whisper-quiet. But, again, ask it to do more than that and it grows somewhat gruffer, proving more intrusive than the Audi A4 40 TDI’s 2.0-litre diesel engine. The plug-in hybrid C300 e and C300 de are virtually silent when running on pure battery power, and are fairly smooth when switching between power sources.

There isn't much wind noise in the C-Class, but road noise is less impressively contained, with there being a noticeable hum over coarse road surfaces – even in cars on relatively small 17in and 18in wheels. Bigger wheels, stiffer suspension and a rorty exhaust make the C43 and C63 AMGs the noisiest of the lot at a cruise, although that's arguably part of the fun of these performance variants.