What should I look for in a used Mercedes CLK coupe?

The CLK doesn't feel quite as solid as older-generation Mercedes, and owners have had problems with them. However, there are few serious reliability issues, as long as the car has been properly maintained.

So, in an ideal world, look for a full Mercedes-Benz service history, which should indicate that it's been looked after. However, stamps from specialists are acceptable on older examples.

Neverthless, there are quite a few potential - and potentially costly - things to worry about. Replacing a failed catalytic converter is likely to set you back at least £900, for example, while oil leaks from the cylinder head are a sign of engine problems.

About a third of cars suffer some type of axle and suspension problems, and electrical gremlins are also not unknown, so make sure all switches and controls work.

Also check that, where necessary, the recall work to replace the rear seatbelt mechanism was carried out. Look at the fog lamps as well, as they are prone to misting up, and at the single arm wiper mechanism, which needs regular lubrication that is not included in normal Mercedes service schedules. It's prone to failure and costs £800 to replace.

What are the most common problems with a used Mercedes CLK coupe? 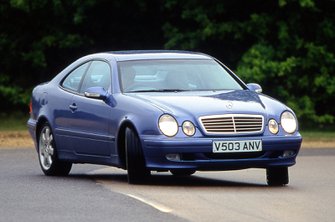