You’ll have no complaints about the amount of reach and height adjustment that you get with the steering wheel. However, you don’t get adjustable lumbar support unless you go for the top-level AMG Line Premium Plus trim, which brings many extras on top, including full electric seat adjustment with a memory function.

The GLB’s driver’s seat is also narrow enough to make you question whether you’ll still fit if you eat dessert, plus some people will find the non-adjustable lumbar overly firm, and you sit comparatively low in the car, so that you almost feel like you're in a hatchback rather than an SUV. The Land Rover Discovery Sport, by contrast, offers a wide, comfortable seat and the sort of view usually reserved for HGV drivers.

All GLBs come with digital instruments instead of conventional dials, and you can arrange them in a number of modes and styles. As standard, it's a 7.0in screen but, if you step up to AMG Line Premium, it grows to 10.25in. The rest of the dashboard layout works well, with a row of simple buttons to manage the climate control.

The GLB's big, square windows provide a great view out of the front and to the sides, but look back over your shoulders and there are blindspots behind each rear pillar. You get a rear-view camera as standard to help mitigate those, but front and rear parking sensors are standard only once you get to AMG Line Premium trim.

Every GLB gets LED lights all round, including the headlights, and top-spec AMG Line Premium Plus models have adaptive LED headlights, which you can leave on main beam, because they automatically shape their light to avoid dazzling other road users. 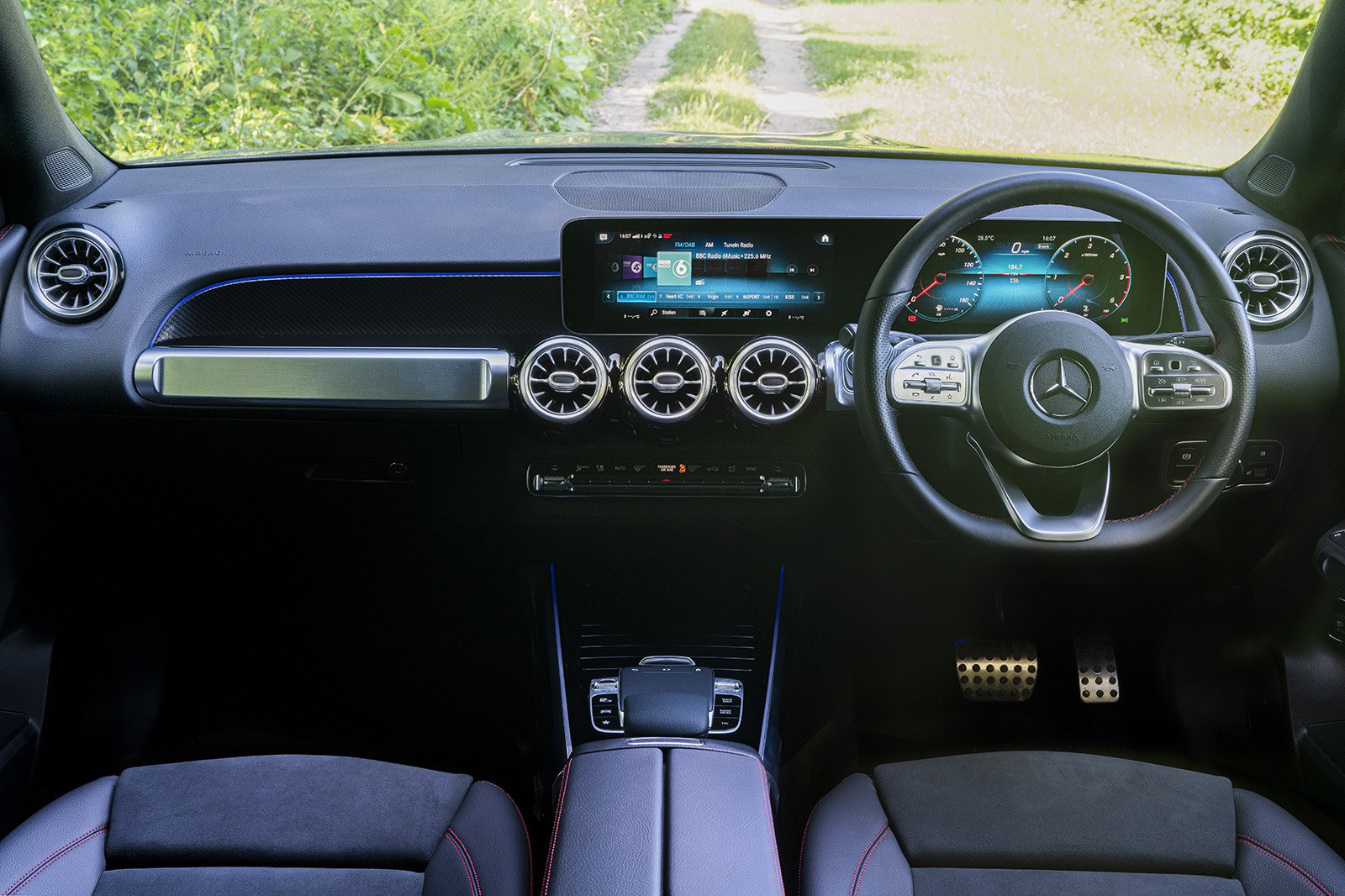 As standard, you get a 7.0in infotainment screen with crisp graphics and responsive software. Built-in sat nav, Bluetooth and a DAB radio are all included, while upgrading to AMG Line Premium expands the screen’s size to 10.25in, and adds wireless phone charging as well as Apple CarPlay and Android Auto smartphone mirroring.

Whatever the screen size, it can be operated either as a touchscreen or via a touchpad controller (similar to a laptop's) between the front seats. The latter method is less distracting when you're driving, and gives the GLB an advantage over pure touchscreen systems like the one in the Discovery Sport.

There are also two tiny touchpads on the steering wheel that you can use to control the system, or you can rely on the natural speech voice control for many things, which you wake up by calling out "Hey Mercedes". Overall, the GLB's infotainment system is only surpassed by the BMW X3's.

Even without the atmosphere created by the ambient interior lighting in AMG Line Premium models, the GLB still strikes a classy pose. The twin digital displays offer a clean and modern look, and the most prominent areas, such as the top of the doors and dashboard, are upholstered in soft plastic or artificial leather.

Just bear in mind that some of the materials used lower down are considerably less appealing than those in your eyeline, and the air-con panel flexes when you use it. Interior quality is roughly on par with the Discovery Sport, then, but not as good as in the Audi Q5 or BMW X3.