What should I look for in a used Mercedes M Class 4x4?

This version of the M-Class has been the subject of two recalls, the first affecting nearly 4000 cars built in 1997, and issued because the driver's seat belt could disengage accidentally. The second affected almost 30,000 cars built in the four years from April 1998, and concerned a possible loss of power steering fluid.

Perhaps the biggest worry for a potential M-Class buyer is the damning reports from owners: the M-Class finished in the bottom five overall in the 2005 JD Power customer satisfaction survey, a very poor result for a company such as Mercedes. The biggest problems were the suspension and brakes, but faulty seats were also reported.

However, figures from Warranty Direct in fact show that the M-Class owners make fewer claims than average, although the bills on those occasions can be rather high. In Warranty Direct's experience, the electrics are weakest point, responsible for more than a third of all claims.

What are the most common problems with a used Mercedes M Class 4x4? 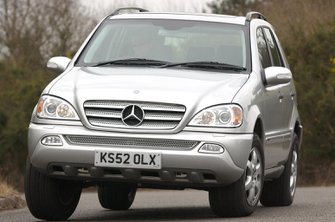