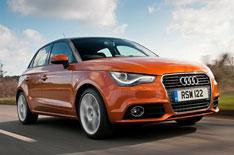 Think of the new Audi A1 Sportback as an A1, but with that little bit extra. With five doors instead of three, and five seats instead of four, its designed to give buyers all thats good about the award-winning supermini, but with an added dose of practicality. The question is, does it succeed? Well, yes and no.

Whats the 2012 Audi A1 Sportback like inside?
For passengers, its much better than the three-door A1. The extra doors make access to the back seats much easier and, thanks to a significant improvement in rear headroom, its a good deal more comfortable once youre in.

Sure, your hair will brush the ceiling if youre six feet tall, but at least youll be able fit without having to slouch. Theres a fraction more shoulder room in the back, too, but youll be hard-pressed to notice its still too limited to accommodate three people in comfort. Still, those who can fit will enjoy a wonderfully plush environment thanks to the A1s sumptuous materials and exemplary build quality.

The A1 Sportback isnt so successful at carrying luggage, though. The boot is no bigger than the three-door car's, giving 270 litres under normal circumstances and 920 litres with the rear seats folded down. However, thats much more forgivable than the way in which the back seats fold down. In the three-door, the backrests lie flat because you can move the seat squab out of the way first. In the Sportback, the squab is fixed, so the backrests lie at an awkward angle. Thats not really acceptable in a car geared towards extra practicality.

Whats the 2012 Audi A1 Sportback like to drive?
The driving experience is pretty similar to the three-door A1's. You get the same crisp control and impressive stability in corners, while the cars agility is helped in no small part by the accurate, well-weighted steering.

However, the ride in our test car, the Sport-trimmed A1 Sportback (which occupies the middle ground of three suspension set-ups), wasnt as smooth as were used to. Dont panic unduly, though that could be explained by the optional 17-inch wheels fitted in lieu of the standard 16-inch alloys we know from experience that the A1s ride deteriorates drastically on bigger wheels.

Four engines are currently available: three turbocharged petrols giving 85bhp, 120bhp or 182bhp, and a 104bhp diesel. The diesels figures for fuel economy and emissions sound very appealing, but the engine itself doesnt its grumbly, coarse, and you feel too much vibration through the controls. Its pretty flat low down, too. We also tried the mid-range petrol, which is a much better bet its smooth, flexible and capable of real pace.

Should I buy one?
The A1 Sportback isn't a revolution in practicality after all, the footprint of the car is no bigger than the three-doors. However, if you like the idea of an A1, but regularly need to use the rear seats, the Sportback fits the bill perfectly. Plenty of people will buy one, too Audi reckons that two out of three A1s sold from now on will be Sportbacks.

The A1 isnt cheap by supermini standards, and the Sportback carries a further 560 premium over the three-door version. Still, your outlay will be protected by super-strong resale values, and running costs for most models are very competitive.

The diesels figures are particularly impressive, returning an average of 74.3mpg and emitting just 99g/km of CO2. However, wed point you towards the punchier, smoother 120bhp petrol it costs less to buy trim-for-trim, and with figures of 52.3mpg and 126g/km, the running costs wont bankrupt you.

Whichever version you go for, though, youll get a decent amount of standard kit including alloy wheels, electric front windows, an MP3-compatible stereo, six airbags and stability control.