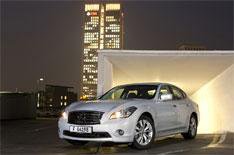 The latest version of the Infiniti M hybrid aims to right a major wrong. When the car was launched in 2010, it had CO2 emissions of 162g/km, which placed it in an uncompetitive company car tax bracket.

The 2012 model cuts CO2 to 159g/km, which doubles the amount of value a company can claim in tax relief and brings company car tax down by one band to 22%.

This, and a reduction in the list price, means a top-rate taxpayer could save around 180 a year in tax. The 3g/km CO2 saving also results in a 0.5mpg improvement in the official fuel economy, taking it up to 40.9mpg.

Infiniti says it has made the improvements by tweaking the battery and the electric motor, meaning you can travel slightly farther in electric-only mode.

Infiniti is also keen to point out that the 359bhp petrol-electric M is still the fastest accelerating car of its kind on sale today, with 0-62mph taking just 5.5 seconds rivals from BMW and Lexus need an extra 0.4 seconds.

What's the 2012 Infiniti M35h like to drive?
The changes to the M's hybrid powertrain are minor, which means the car feels much the same to drive as before.

The V6 petrol engine in the M is powerful and it makes the car rapid. This is true whether you're nipping away from the lights under electric power or using the engine at higher speeds. The switch between battery and electric power is nice and smooth, too.

Sadly, some of the other elements are anything but, with the brakes the biggest offenders. They're far too grabby and don't allow the driver to relax around town.

The sluggish seven-speed automatic gearbox is also an issue, and the ride is rather lumpy.

What's the 2012 Infiniti M35h like inside?
The M35h has a classy interior built from a selection of high-quality materials that look and feel great. The biggest downside is the vast amount of space the battery robs from the boot; the standard diesel and petrol models' 450-litre space falls to just 350-litres, which is a long way short of the class best.

There's room for four adults in the cabin, although a large transmission tunnel eats into rear foot space.

Should I buy one?
Now that the M hybrid has ducked under the 160g/km CO2 barrier, it's a more compelling model to run for either a corporate or private buyer. Unfortunately it's still significantly dirtier and thirstier than the new Lexus GS hybrid, let alone the best diesel executive saloons.

With this in mind, we'd take the 3% hit on company car tax and go for a BMW 5 Series or Jaguar XF diesel.