More for you |
2014 VW Amarok Canyon reviewVolkswagen Amarok drivenJaguar E-Pace vs Jaguar F-Pace: which is best?It it right for dealer to keep a used car's registration document for months? Will my car be able to run on the new E10 petrol?
Home
News
2012 VW Amarok review
news 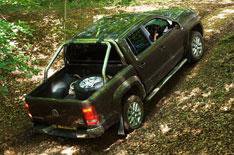 The VW Amarok is a four-wheel-drive pick-up that's aimed at farmers, builders and outdoor-pursuit fans. It's now available with a 178bhp 2.0-litre twin-turbo diesel engine and the latest eight-speed automatic gearbox.

What's the 2012 VW Amarok like to drive?
There's no denying the forcefulness of the Amarok's engine. It produces 177bhp and 310lb ft of torque, so pulls eagerly, delivering purposeful acceleration and strong overtaking muscle.

It's a good deal more efficient than its rivals too, when you consider a Nissan Navara or a Toyota Hilux require 2.5-litre engines to produce similar power.

More pertinently, the Amarok's engine is much more refined than the rather coarse units you find in its rivals. The Amarok's is still quite vocal when you work it hard, but because eighth gear is effectively a high-ratio overdrive, the engine is relaxed and is reasonably hushed at motorway speeds.

It's probably the smoothness of the gearshifts that impresses most, however. The ZF eight-speed gearbox is essentially the same unit you find in luxury cars such as the Bentley Continental GT, so it's no surprise it slips through the ratios with undetectable ease.

Volkswagen also says that because the gearbox has such a broad operating band there's no need for a low-ratio transfer box to aid off-road capabilities. Instead, the gearbox has a low first gear and this, along with electronic traction aids and hill-descent control, help the Amarok climb muddy hills and descend rocky gullies like the proverbial mountain goat.

The archaic leaf-spring rear suspension makes the ride a little bouncy, but by the standards of the class it's a comfortable vehicle. Along with relatively little tyre noise and surprisingly modest wind noise (given the size of those door mirrors), the Amarok stacks up as a surprisingly refined cruiser.

Of course, the whole point of leaf springs is that they are better at coping with heavy loads than upright springs, and so it proves. They allow the Amarok to handle a one-tonne payload, and tow trailers of up to 3.2 tonnes in weight.

The Amarok's near 13-metre turning circle makes three-point turns a bit challenging, but all-round visibility is excellent, so reverse parking doesn't present too many challenges.

What's the 2012 VW Amarok like inside?
Pick-ups tend to lead hard lives, so it's hardly surprising that the Amarok's interior is decked out with hardy, no-nonsense materials. There are four doors and roof-mounted grab rails to help ease entry for up to five occupants and there's a decent amount of leg-, head- and elbowroom, and that large glass area gives the cabin a light and airy feel.

It's a bit of a climb to haul yourself up into the driver's seat, but once you're in there's a good range of seating and steering wheel adjustment to help you dial in a comfortable driving position.

Further back, there's a drop-down tailgate and an exceptionally large loadbay, which is wide enough to allow a forklift truck to load a standard-size pallet sideways on.

Should I buy one?
If you're in the market for a pick-up truck then the answer is a resounding yes.

The Amarok is competitively priced against its rivals and is by some margin the most refined pick-up you can buy. It's a tough cookie too, that's well screwed together and capable of hauling and towing significant loads.

On top of this, it's a first-rate recreational vehicle and a rival to traditional 4x4s thanks to its serious off-roading abilities. What's more, it's reasonably efficient, with average economy of 35.7mpg and emissions of 199g/km.