More for you |
Most and least reliable family carsWhat to do if you put the wrong fuel in your carVolkswagen Passat GTE long-term test reviewNew issue of What Car? magazine on sale nowTrue MPG: most efficient SUVs
Home
News
2013 Alpina B3 Bi-turbo review
news 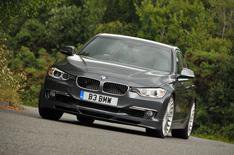 The Alpina B3 Bi-turbo is proof, if it were needed, of how this small, family-owned operation in Bavaria manages to co-exist with the behemoth that is BMW.

Even with a new M3 in the works, the B3 Bi-turbo has been future-proofed against being too close mechanically to the official BMW product because while the factory engineers are likely to go for a single turbocharger on their 3.0-litre six-cylinder petrol engine, Alpina's engineers use two.

The result is a car with 404bhp and 443lb ft of torque, enough for a 0-62mph time of just 4.2 seconds. Does it feel like a complete package, though, or a tuned dragster?

What's the 2013 Alpina B3 Bi-turbo like to drive?
We can't really understand how you could have many concerns about the B3 Bi-turbo's pace, but just in case you do, you can forget about them. The engine's huge reserves of torque are available at barely 3000rpm, and Alpina's remapping and exhaust technology means the B3 Bi-turbo pulls freely, strongly and sonorously right up to 6000rpm.

With only the weight of a 3 Series to move along, there's enough grunt to make overtaking a breeze and motorway slip roads a real hoot.

The gearbox an eight-speed BMW automatic, with new software is not totally foolproof when you leave it to its own devices. However, it's smart enough for most situations, and capable of rapid-fire changes when you take control yourself using knobbly shift buttons at the back of the steering wheel (as opposed to paddles).

BMW's Adaptive Chassis comes as standard on the B3, but its software parameters have been altered by Alpina's engineers along with some of the oily bits such as springs and anti-roll bars.

The B3 Bi-turbo is firm, undoubtedly, but the real triumph is that it is incredibly easy to forget you're on 20-inch wheels. There is sophistication and suppleness in the ride here that you won't find on any BMW a result of rubber that doesn't use run-flat technology, and the recalibration of the entire system that this allows.

The steering matches this composure. It's direct and nicely weighted, but not responsive to the point of feeling nervous. The Bi-turbo feels properly planted at motorway speeds, too.

What's the 2013 Alpina B3 Bi-turbo like inside?
Alpinas are made on the same line as the regular 3 Series, so it won't surprise you to learn there's a lot of the normal car in the cabin.

There are a few Alpina add-ons, though and you may not like them. The re-treated fascia trim isn't too offensive, offering a 'piano' finish and a subtle Alpina logo. However, you can also choose less appealing add-ons, such as big badges on the backs of the seats, while Alpina has now started to place its individual model plaque in the middle of the centre console (it used to be in the headlining).

This puts it into your line of sight more often and depending on your point of view, it's either a charming reflection of the company's hand-built processes or something that looks distinctly aftermarket.

Alpina's counter-argument to this would be that you can spec your car with a totally bespoke interior finish although doing so will add a few thousand pounds to the price tag.

The rest of the fascia is pretty much standard BMW fare, albeit with Alpina's trademark blue VDO instrument dials.

Should I buy one?
The Alpina B3 Bi-turbo shows how brilliantly the boys from Buchloe are able to slot their products into a niche. It offers next-generation M3 pace now, and while some of the cabin trim modifications are unlikely to appeal to everyone, there's no denying that the B3's chassis set-up offers an excellent compromise between comfort and agility.

At 55,000, the B3 costs more than 10k more than the most expensive regular 3 Series, and it's almost as pricey as a Mercedes C63 AMG. It's an oddball choice, then but as with countless other offerings from Alpina in years gone by, it's no less appealing because of that.