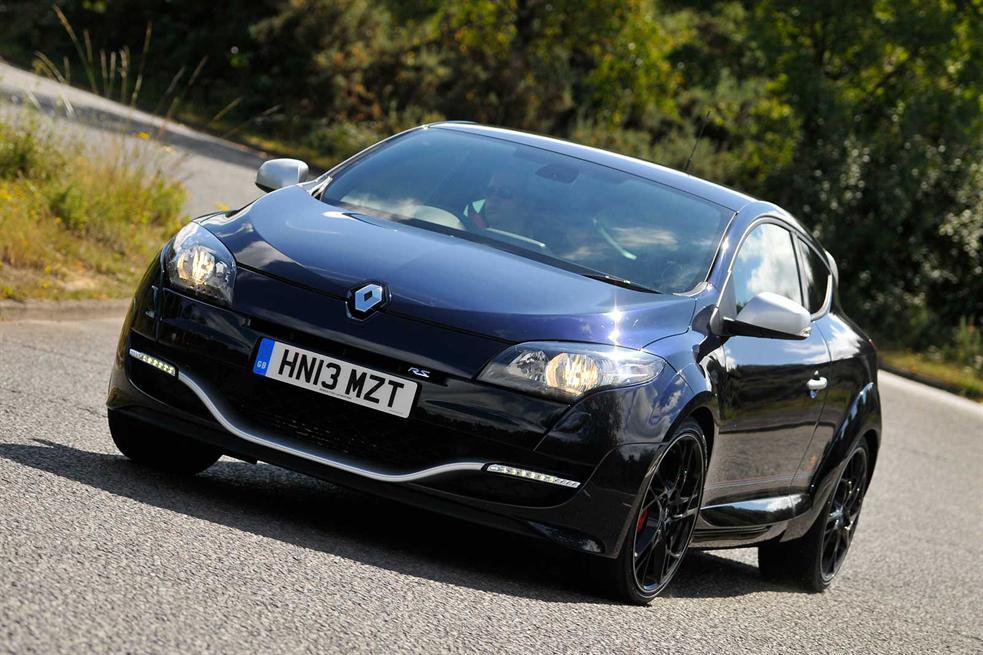 The Renault Megane Renaultsport Red Bull Racing RB8 is the latest limited-edition version of Renault’s superb hot hatch. It celebrates Renault and Red Bull Racing’s success in F1, but the big news is that it offers a host of desirable equipment over and above the standard models.

It gets exclusive blue paintwork and platinum trim on the outside, plus two-tone 19-inch wheels with super-grippy tyres. On the inside are part-leather Recaro sports seats, a touch-screen sat-nav and infotainment system, as well as the latest version of the Renaultsport Monitor, which provides real-time performance data. A smattering of Red Bull branding competes the visual changes.

Crucially, it also gets the sportier suspension and traction-boosting limited-slip differential from the Renaultsport Cup version, which is a three-times What Car Hot Hatch of the Year Award winner, so this RB8 should be a blast to drive.

It’ll need to be, because it’s priced midway between cheaper rivals such as the Ford Focus ST and VW Golf GTI, and upmarket hot hatches including the BMW 135i and new Audi S3.

Fantastic when you’re in the mood. The 2.0-litre engine fires the RB8 down the road at alarming speed and, unlike many turbocharged engines, it really likes to rev. This is a hot hatch that’s genuinely fast in a straight line.

That’s nothing to the way the car attacks a series of corners. The RB8 is so agile, grippy and composed, it’ll carry ridiculous pace in to and through a bend, while the limited-slip differential means you can stand on the accelerator on the way out and none of the engine’s power is wasted in wheelspin.

Unlike in many rivals, you’re totally involved in the process. The steering gives you a great idea of how much grip there is, and the superb body control and strong brakes are hugely confidence inspiring.

A word of warning, though: those 19-inch alloys (an inch larger than on other Megane Renaultsports) make an already firm-riding car even firmer. It’s only truly uncomfortable if you hit a large bump, but you’ll certainly know how lumpy the road is. The wheels are also particularly susceptible to being kerbed, so you’ll have to be careful when parking if you want to keep the wheels looking perfect.

This isn’t the most refined hot hatch around, either. There’s a bit of wind noise on the motorway and those wide tyres kick up a racket on coarse surfaces. Like the firm ride, refinement is far from unacceptable; you just need to make sure you can put up with it on a daily basis.

The cabin is almost as focused as the driving experience. You sit low in the superbly supportive Recaro seats, and the steering wheel and pedals are perfectly aligned, so the driving position is pretty much spot-on. You’ll have to watch your thighs when getting in and out of the seats, though, because the big side bolsters are uncompromisingly hard.

Things are less impressive in the rear seats, where six-footers will want a bit more head- and kneeroom. Storage space is good and the boot is surprisingly large, but you’ll have to lift your bags over a high lip and through a narrow opening.

Another thing to bear in mind is the awful over-the-shoulder visibility. You’ll certainly be glad that rear parking sensors are standard, but you really need to pay attention and check your blind spots when changing lanes on the motorway.

Aside from a couple of slightly lightweight switches, everything feels solid. The infotainment system is full of neat connectivity features, including weather forecasts and access to email, but it isn’t the most intuitive to use.

Oh yes. It’s fast and thrilling, so delivers an adrenaline rush that few rivals can match. True, a Volkswagen Golf GTI would demand fewer compromises – it’s quieter, more comfortable and has lighter controls – but if you want a hot hatch for the way it drives rather than what it says about you, the Renault Megane Renaultsport RB8 is brilliant.

The thing is, so is the Cup version. It isn’t as exclusive-looking or as lavishly equipped as the RB8, but it’s just as fantastic to drive and is £2700 cheaper, so it’s where our money would go.