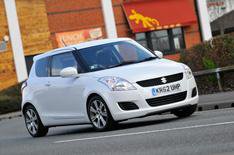 The Suzuki Swift SZ-L special edition is Suzuki's latest stab at attracting younger, image-conscious buyers to its supermini range. Essentially it's the mid-grade 1.2-litre petrol SZ3 dressed up to look like a hot hatch.

This hot hatch treatment includes a rear spoiler, 16-inch alloys, privacy glass and metallic paint. In fact, apart from the SZ-L badge and the absence of twin exhaust tailpipes, from the outside at least it looks identical to the range-topping 1.6-litre Sport.

Current prices start at 10,599 for the three-door car (a five-door is also available), while the low insurance group rating and the 1.2-litre engine's CO2 output of 116g/km keep down running costs.

What's the 2013 Suzuki Swift SZ-L like to drive?
Underneath the go-faster styling tweaks, the Swift SZ-L is powered by the same 1.2-litre engine as the SZ3. It has enough guts to take everyday driving in its stride, but does feel weak when you ask more of it. Plenty of revs are needed to get it sharply away from the lights, for example, and performance on the motorway is sluggish.

Five rather than the Sport's six gears also give it a shorter leash at higher speeds, and the smaller engine makes its efforts heard.

The ride's a little firm, so you'll know if you hit even small potholes, but at least the car's characteristic fun handling remains as good as ever. Like all Swifts, responsive steering, impressive agility and tight body control make the SZ-L enjoyable to drive.

What's the 2013 Suzuki Swift SZ-L like inside?
There are a few interior cues that tell you you're in something a bit more special than a standard Swift, although the trim is ostensibly the same and the hard but reassuringly substantial plastics won't blow you away.

The SZ-L does get a sprinkling of neat touches, though, including red stitching on the steering wheel and gearshift surround. It adds cruise control to the standard SZ3 features of Bluetooth, a USB port, air-con and stability control, although it misses out on the Sport's keyless entry and ignition, climate control and, slightly disappointingly, bucket-style seats.

There's plenty of room for a family of four and the weekly shopping, although holiday packing could be a bit of a squeeze, while leggy rear-seat passengers might struggle on longer journeys.

Should I buy one?
The SZ-L is all about ballsy image and plucky handling, and it does both with gusto. Better still, if you buy before the end of June, you'll benefit from Suzuki's VAT-free offer, which makes it a lot more affordable than rivals.

At offer prices, the styling extras will set you back an extra 600 over the SZ3, but the smaller engine will save you more than three grand on the feistier top-of-the-range Sport model, as well as a few hundred pounds a year on insurance and road tax.

The SZ-L might lack the performance that its titillating styling promises, but if you want hot hatch looks for boy racer money, it's an enticing proposition.