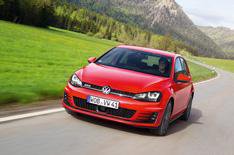 When a manufacturer gives a five-star car more power and fizz, it's always an appealing prospect and that's exactly what's happened to the new Volkswagen Golf GTD.

Sports suspension is standard, with its 15mm drop in ride height and retuned shock absorbers.

For all its initial promise, though, the Golf GTD still has much to prove. At 25,285 it's far from cheap, and the Seat Leon TDI FR gives you the same engine for 22,075.

What's the 2013 Volkswagen Golf GTD like to drive?
Seriously good. We drove the manual model complete with optional adaptive dampers (which cost 800), but it's the engine that's the real star. There's a hefty rush of power as the turbo kicks in, followed by a broad mid-range that's potent enough to give the GTD exhilarating, hot hatch-rivalling pace.

Despite its strong torque, the GTD suffers from little of the wheel-scrabbling under heavy acceleration that's common in high-powered front-wheel-drive cars (at least in the dry conditions we experienced the car in). It's helped by an electronic system that works like a limited-slip differential, and can brake the inside wheels during cornering to improve agility.

The steering also impresses. It's the system that you get in the latest GTI, and gives the Golf GTD's handling a real sense of immediacy. It responds sharply on initial turn-in, and while it can feel a little too sensitive at motorway speeds, it's otherwise ideally weighted and a pleasure to use in any sort of driving.

When the optional adaptive dampers are in Sport mode, the GTD's ride is a touch sharp on initial bump absorption and jittery at high speeds, but the Normal and Comfort settings are more pliant, while body roll is always kept in check.

Crucially, the GTD compromises none of the standard Golf's usability in the name of fruitier performance. The engine is impressively refined in anything but all-out acceleration. In short, the GTD remains a relaxing daily driver.

What's the 2013 Volkswagen Golf GTD like inside?
The cabin is almost identical to the GTI's, only finished in various hues of grey rather than the petrol car's red highlights, so it's no surprise that the GTD feels special inside.

The leather-trimmed multi-function sports steering wheel is a joy to use and looks great, as does the golf ball-effect gearknob (note: the automatic gearbox is pictured above).

You'll be perfectly comfortable, too, because the Golf has a spacious cabin and the GTD's supportive sports seats offer enough adjustment to accommodate the vast majority of body shapes.

The standard 5.8-inch colour touch-screen is easy to use and makes a good focal point for the dashboard, although it's disappointing that sat-nav is a cost extra when it's standard on lesser GT models.

Should I buy one?
If you want hot hatch looks and performance with angelic running costs, then yes the VW Golf GTD is an outstanding package and about the best hot diesel hatch out there. Business users are expected to account for 60% of the sales, which is understandable given that the GTD will cost 40% taxpayers as little as 1615 per year.

However, if you're a private buyer, be sure that you really value the Golf's blend of badge kudos and that enthusiastic edge because you are paying a lot for it. The Seat Leon TDI FR falls marginally short on efficiency, but has the same performance and is more than 3000 cheaper than the GTD.

Or, if you can sacrifice the sporting looks and more focused handling, the 2.0 TDI 148bhp Golf GT is no slouch and will also cost you more than 2000 less despite being similarly equipped.

Still, even though the list price looks a little steep, the Golf GTD will hold its value well, and by any standard it's a mighty thing.

Read the full Volkswagen Golf for parents at Mumsnet Cars >>