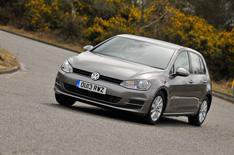 Even though it's available only in entry-level S trim, you still get all the basics, including air-conditioning, Bluetooth, electric front windows and remote central locking.

What's the 2013 Volkswagen Golf 1.2 TSI 85 S like to drive?
The 1.2 TSI's 84bhp and 118lb ft of torque are fine for driving in town, but you'll need to work the engine hard on the motorway, and will often find yourself craving for more overtaking power on faster A-roads.

You won't complain about refinement though, because this engine remains quiet and smooth even at high revs.

Unlike the 103bhp version of the 1.2 TSI, the 84bhp engine is available only with a six-speed manual gearbox, but thats no bad thing because changes are smooth and accurate.

The steering is consistently weighted and precise, and even though the 1.2 TSI has less sophisticated rear suspension than that of range-topping Golfs, it still rides with more composure than most other small family cars.

With average economy of 57.6 mpg and CO2 emissions of 113g/km, both figures are virtually identical to those of the more powerful 103bhp version.

What's the 2013 Volkswagen Golf 1.2 TSI 85 S like inside?
The interior doesn't have the outright wow-factor of an Audi A3's, but the quality of the materials and assembly is good enough to eclipse pretty much any other rival.

The dashboard is easy to use, thanks to a clear layout and an excellent touch-screen infotainment system that has logical menus, large icons and handy shortcuts.

The cabin is practical, too. There's enough space for four six-footers to travel in comfort and the 380-litre boot is one of the biggest in the class. Its adjustable boot floor also allows you to reduce the load lip and provides a flat load bay when the seats are folded.

You don't get alloy wheels (these cost 415) or a leather-trimmed multi-function steering wheel (a 400 option), but unlike some more powerful versions of the Golf which are available only in SE trim and above you aren't forced to pay for extras that you may not want, such as adaptive cruise control.

Should I buy one?
If you really fancy a Golf and want to spend as little on it as possible, the 84bhp 1.2 TSI has obvious advantages.

However, its harder to argue a case for this entry-level model than it is for pricier Golfs. Thats because although it still costs more than rivals from Seat and Skoda, you get less (rather than more) for your money.

If you need five-door practicality, the Skoda Octavia 1.2 TSI provides more space, more power and more equipment while still undercutting the VW by 1160.