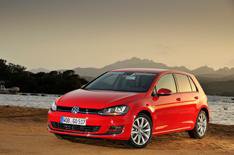 The new Volkswagen Golf will cost from 16,330 when it goes on sale later this month.

That means an entry-level version of the MK 7 2013 Golf is actually cheaper than the current version, which starts at 16,425.

The final petrol option at launch is a clever 138bhp 1.4 ACT engine, which shuts down two of its cylinders under light engine loads such as periods of motorway cruising to save fuel and minimise emissions; it manages 60.1mpg and 109g/km.

A 217bhp GTI hot hatch and a Bluemotion model that emits just 85g/km of CO2 will follow next summer.

Three trims levels will be available - S, SE and GT.

Every model is equipped with a DAB radio, Bluetooth and seven airbags, but the mid-level SE trim is the pick of the range because it upgrades the entry car's black and white touch-screen to colour and brings smarter interior trim, adaptive cruise control and a City Emergency Braking system that automatically applies the brakes if it detects an imminent collision at speeds below 19mph.

Other safety equipment that will be available includes a fatigue-detection system, lane-keeping assist and traffic sign recognition.

Order books open on October 18, with deliveries beginning in January.