We test the hottest version of the Mercedes GLA in the UK; with 355bhp and a 0-62mph time of just 4.8 seconds, it's one of the fastest small SUVs money can buy... 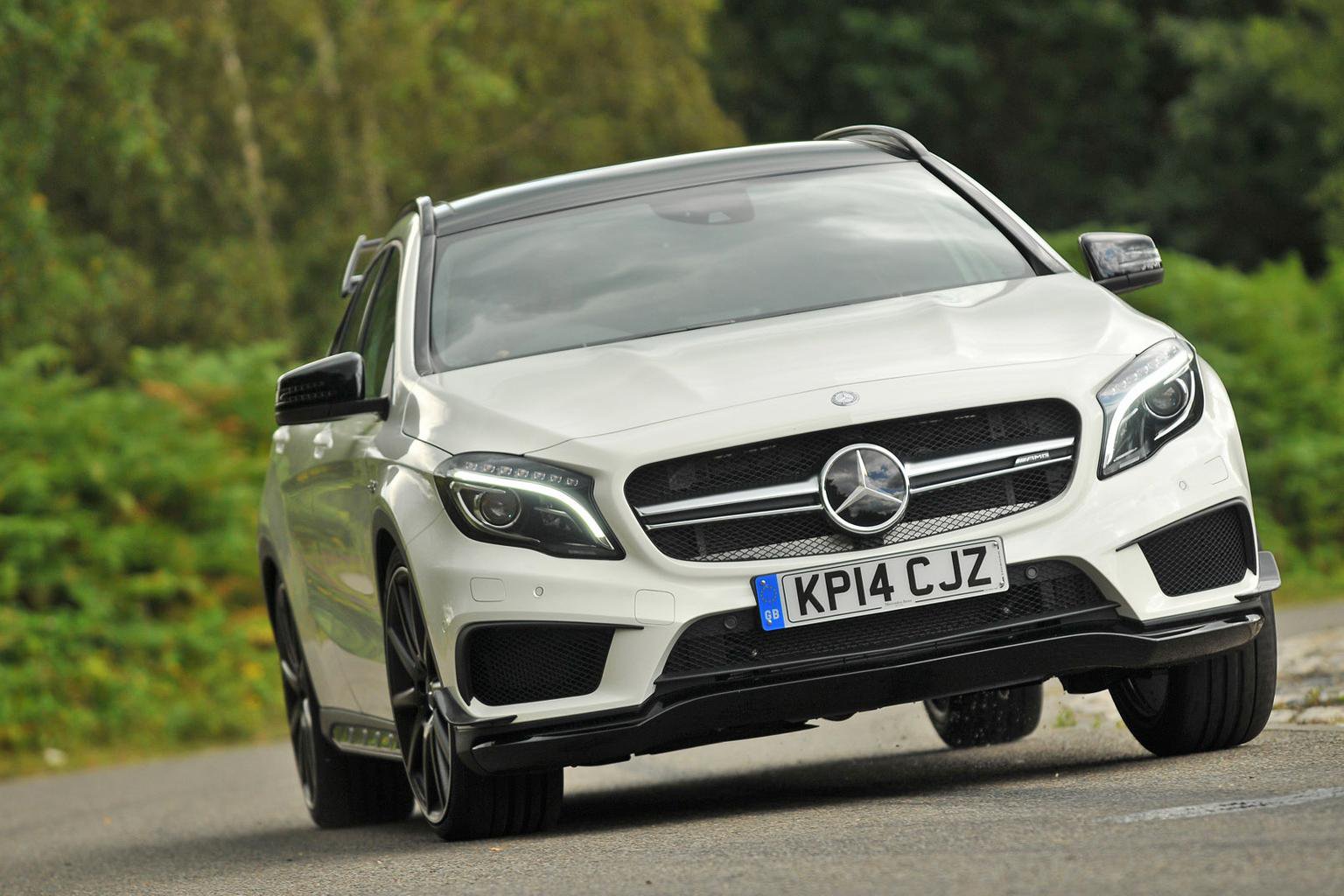 The Mercedes GLA45 AMG is one of a very small number of extreme high-performance small SUVs.

Equipped with a 2.0-litre turbocharged petrol engine (the same unit as the A45 AMG hot hatchback), the range-topping GLA offers the unusual blend of supercar straight-line performance with the slightly raised driving position that's become so popular in the past couple of years.

This is such a small niche that relatively few manufacturers have decided to enter it, which is why the GLA45 AMG is desperately short of obvious rivals. The only genuine one is Audi's RS Q3, although you could argue that the turbo petrol versions of Range Rover's Evoque are an obvious target.

Either way, what you're left with is a bespoke performance baby SUV that can crack 0-62mph in less than five seconds and, if Mercedes' claims are to be believed, offer a more rewarding drive on twisty B-roads than most other SUVs.

The good news is the GLA45's immense powertrain hasn't lost anything in its translation from the 'conventional' A45 AMG, which is to say that the combination of seven-speed dual-clutch transmission and 355bhp is pretty impressive.

The tweaked transmission's automatic modes aren't foolproof - its shifts tend to be a bit slow in Comfort mode, and it can even trip over itself in manual mode, especially if you suddenly ask it to shift down a couple of ratios in a hurry - but for the most part it delivers truly stonking performance.

It's surprisingly flexible for such a highly strung engine, too; there's decent shove from just under 2000rpm, and by the time you're at 3000rpm you're already picking up speed at an illegal rate. Nor does the engine run out of puff particularly early, either; it'll happily pull to more than 5500rpm.

The engine's note varies wildly depending on what kind of driving it's doing. It sounds a little rough if you're pootling around town, but the crisp note when you're pushing on is almost like a racing motor (helped by raucous exhaust backfires on upshifts when you're in Sport mode). There is plenty of turbo whoosh too, almost enough to make the Mercedes feel like a jacked-up rally car.

The GLA45 AMG's performance might be right up there with the quickest hot hatches, but on a winding road there are occasional reminders that you are sitting higher up in a pseudo-SUV. The steering is pleasingly direct, but the GLA isn't quite so keen to change direction as a lower, more focused hatch.

Chuck it at a corner and you're most likely to feel the front wheels start to run wide. Should you then attempt to bring the nose back in line by lifting off the throttle, you may find yourself a bit surprised at just how far the rear end is allowed to slip before the car's electronic stability control scoops you up and prevents you from having an accident. Keen drivers will definitely find it amusing.

Nor does this unusual level of proficiency for an SUV come at the expense of ride comfort. There's no denying that the GLA45 AMG's set-up is firm, but its combination of revised ride height, thicker anti-roll bars and revised springs and shock absorbers does a decent job over broken surfaces at low speeds.

The ride quality deteriorates slightly at motorway speeds (expansion joints and ruts thump through the cabin), but it's a minor quibble in something this focused on performance.

The first difference you'll notice between the GLA45 and regular editions is the seats, which are more deeply bolstered than usual and more supportive as a result.

That aside, the cabin looks pretty similar to the lesser GLAs', albeit with the option of carbonfibre trim on the front of the fascia, and contrast red stitching to give a more sporty feel. There's also a revised instrument cluster and a race-timer integrated into the central infotainment screen.

The main controls are all logically laid out. The infotainment system, which is controlled via a rotary dial between the front dials, isn't quite as intuitive as BMW's iDrive system, but is still relatively easy to use. However, you have to switch to the display ahead of the driver (and the steering wheel controls) if you want to delve into the GLA's safety systems.

Clambering into the rear will remind you that the GLA is not a full-sized SUV; the aperture at the back doors isn't particularly wide, and once you're in place there's only average leg- and headroom for anyone beyond six feet tall. Think of it as a regular family hatchback that you climb into instead of dropping down into and you'll get a fair idea.

The boot is a fair size, at 481 litres, rising to 1235 litres if you lower the 60/40 split rear seats. For comparison, that's 60 litres more standard capacity than Audi's Q3, but around 90 litres less with the seats folded. The GLA does suffer from the same problem as the A-Class, with wide rear shoulders that don't help the loading access. An electrically operated bootlid is offered as an option.

Still, if your heart is set on something with family hatchback space, a raised ride height and the equivalent of a small nuclear reactor under the bonnet, we'd look at the GLA45 AMG before taking a test drive in, say, Audi's RS Q3, which is cheaper, and will hold its value a little better than the Merc.

However, a more sensible option altogether would be to opt for BMW's X3 xDrive35d, which isn't quite as chuckable as the GLA, but offers rapid straight-line pace, greater practicality and, since it's a diesel, much lower running costs.