* 2014 Volvo XC90 to come with more safety kit * Able to steer itself away from edge of the road * Will be able to spot pedestrians in the dark... 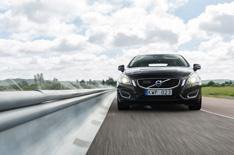 The 2014 Volvo XC90 will come with the highest level of safety equipment and technology found in any Volvo.

Volvo says that most pedestrian fatalities happen in the dark, so the new XC90 will be able to spot pedestrians and cyclists at night. It will also be able to identify large animals in both light and dark conditions.

As soon as the technology has identified a pedestrian, cyclist or animal, it will brake the car to lessen the severity of an impact or prevent it completely.

A more sensitive camera will be able to see a pedestrian before the driver, and apply the brakes if a collision is imminent. It should be able to brake to a complete standstill from around 25mph. It also sounds a warning and flashes a red light in the driver's line of sight.

The first version of the animal-sensing system will look out for larger creatures such as horses. Volvo reckons large animals such as these are less likely to break through the windscreen and A-pillars at less than 43mph, so the technology is designed to slow the car to below that speed.

The new car will be the first Volvo capable of steering itself and help prevent it accidentally leaving the road.

Volvo says that leaving the road is the cause of 53% of all road fatalities in Sweden. The new system will use a camera to monitor the edge of the carriageway, looking for the white lines and a change in road surface. A radar system will keep track of whether there is a barrier.

Between 12mph and 124mph the technology will notice if the car is drifting towards the edge of the road or a barrier. If the approach angle to the side of the road is shallow it will gently steer the car back to its original course, while a sharper angle will result in the application of the brakes and a heavier steering intervention. Volvo claims it will be the first company to offer this technology.

The new XC90 will also be able to steer itself in slow-moving traffic. It will use an upgraded version of the existing adaptive cruise control and lane-keep assist systems.

The car will use radar and camera technology to stay a certain distance form the car ahead, and to stay in its lane around corners up to a certain angle. However, staying in lane will always be more important than sticking to the car in front, so the XC90 will not follow another vehicle off at a junction.

The system is designed to work only in slow-moving congested traffic.

All this technology will be offered on the new XC90 by the end of 2014, alongside existing technology such as the lane-keep assist, blind-spot warning systems and City Safe braking system. The XC90 is due on sale next year.