We know the hatchback version of the new Skoda Superb is extremely good. But is this estate version a worthy challenger to the brilliant Ford Mondeo Estate and Volkswagen Passat Estate?... 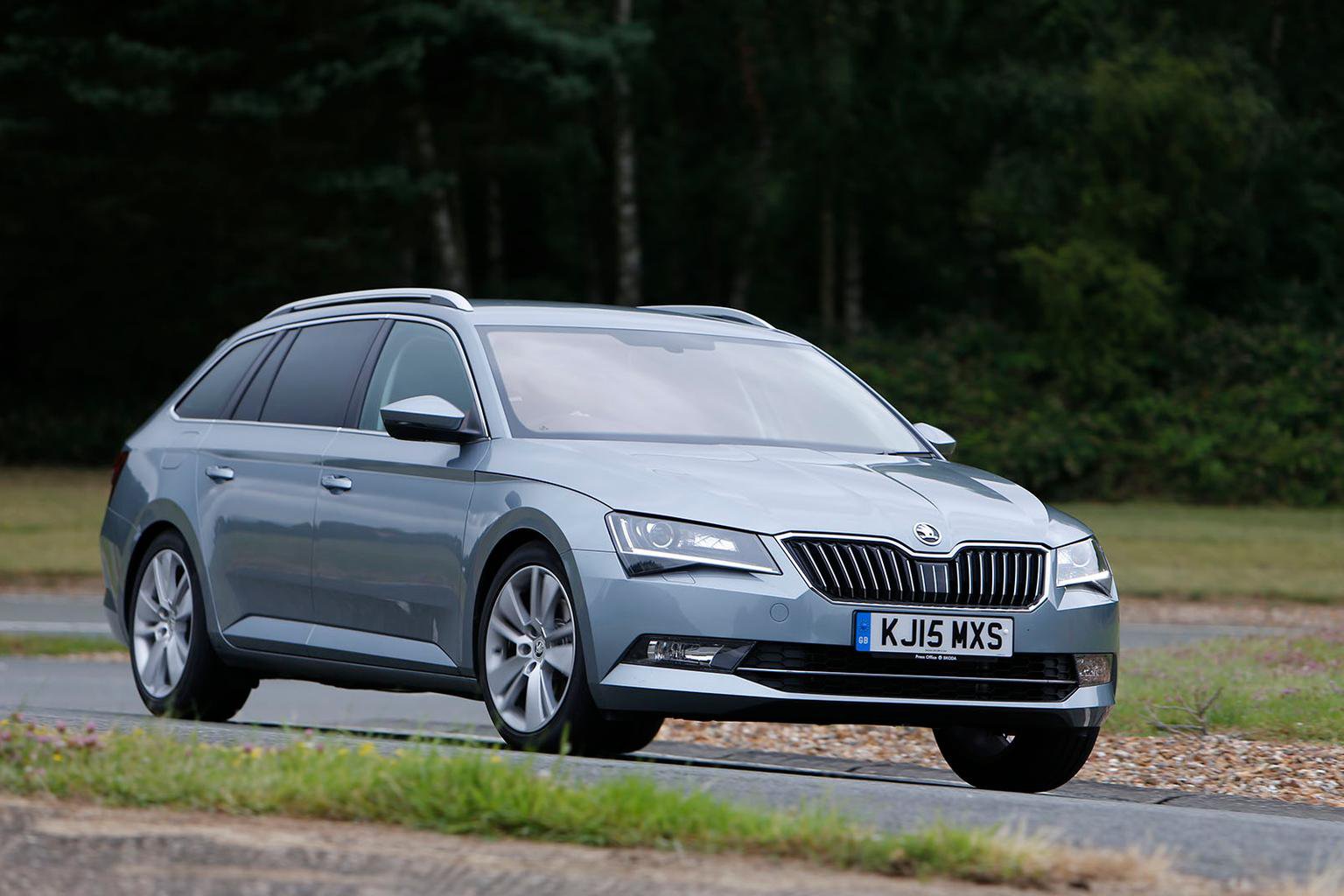 We liked the previous Skoda Superb Estate; it had a vast cabin but without a particularly vast price tag. An all-new version is ready to hit dealer showrooms, and guess what? It’s even bigger – inside and out – but Skoda has kept the price rises to as little as £25 on the cheapest model. That’s a pretty good start.

So what else is new? Well, it’s lighter, despite the bigger exterior dimensions, and has a range of more efficient petrol and diesel engines. This combination means that the Superb Estate 2.0 TDI 150 we’re testing is faster, more economical and cheaper on company car tax than the equivalent Ford Mondeo Estate.

The equipment tally has also improved, plus there are new features such as a Mirrorlink system that lets you control your smartphone via the multimedia screen. There are also several clever touches, including a rechargeable torch in the boot and an umbrella hidden in each front door.

Our car was a mid-spec SE Business Edition, which comes with swanky-looking part-Alcantara seats. These are wide and supportive and come with adjustable lumbar support to help keep you comfortable on long journeys.

Getting comfortable is easy thanks to a steering wheel that has plenty of in and out and up and down adjustment. However, some of our taller testers found that they needed the wheel a little higher than they'd ideally like it in order to stop it obscuring the tops of the instrument dials.

It’s clear that Skoda has paid attention to the Superb’s dashboard ergonomics. Everything is well laid out, with large buttons and switches that are easy to operate at a glance. As many are lifted straight from the more expensive Volkswagen Passat, they look and feel just as classy here.

Considering the substantial price difference between the Superb and the Passat, there’s not the vast gulf you might expect in overall cabin quality. Most surfaces are made of nicely textured soft-touch plastics. There are no brittle-looking plastics such as those you'll find in the rival Ford Mondeo.

The Superb also impresses on the infotainment front. Compared with the Mondeo’s system, with its slightly fiddly menus and icons, the Skoda's is wonderfully intuitive to use. As standard it comes with a 6.5in touchscreen, but if you upgrade to the 8.0in screen (shown in our photos), you'll get additional features such as a DVD player and in-car wi-fi.

The new Superb isn't only bigger on the outside than its predecessor; it’s noticeably bigger on the inside, too. There's more rear leg and head room than in either a Mondeo or a Passat – two practical cars in their own right – and that gives an almost limo-like environment for those sitting in the back.

It’s the same story with the boot, which is bigger than that of many larger and vastly more expensive SUVs. With the rear seats in place, the Superb's load bay is bigger than a Mondeo’s by the equivalent of one large suitcase, giving plenty of space for most situations.

However, the boot isn't perfect. With the rear seats folded down there’s an awkward step in the floor of the extended load area, plus a noticeable load lip; both can make lifting large and heavy items in and out quite tricky.

Paying £150 extra for a height-adjustable floor solves both of these problems, while another £90 gets you levers on the sides of the load bay, allowing you to drop the rear seats from inside the boot. It's just a pity these things aren't standard.

There are some neat standard features, though, such as the rechargeable torch, large cubbies on each side of the boot, foldaway carrying hooks and Velcro dividers to stop loose items rolling around.

The Superb has proven itself to be safe, too, with Euro NCAP awarding the hatchback version five stars, thanks in part to its seven airbags – including a driver’s knee bag – and automatic emergency braking as standard.

This 148bhp diesel engine manages to haul the Superb off the line pretty quickly. On paper the 0-62mph time matches that of the Passat and is half a second better than the Mondeo’s.

On the road it feels sprightly enough to justify that claim, as long as you keep the engine revs above 1750rpm. Whether you’re darting around town or looking to keep up with traffic on the motorway, the Superb never gets close to feeling underpowered.

Like the Passat, which uses the same engine, the Skoda can sound a little gruff at times – particularly under hard acceleration. The Mondeo might not accelerate up to speed as briskly, but its engine is quieter and smoother.

If you cruise along at 70mph, you’ll also notice a bit of wind noise coming from around the Superb’s door mirrors, along with some road noise over coarse surfaces, but neither is loud enough to irritate.

We’ve tried the Superb hatchback on larger 19in wheels and adaptive suspension, and found the ride is a mixed bag. However, this Estate version was on standard springs and 17in alloys, and it rode very well indeed. It’s soft enough to take the edge off most bumps, with only the harshest potholes and ridges troubling you inside the cabin. It’s on a par with the Mondeo in this respect, which is one of the most comfortable cars in the class.

It can’t match the Mondeo’s excellent handling, though. The Ford is that bit more agile and more fun to drive, although the Superb is still pretty impressive, with plenty of grip and predictable handling. There's more body lean when you turn in to corners, though.

On the plus side, the Superb steers very nicely; it's accurate with enough feedback, and there's sufficient weight around the straight-ahead to help you keep in the centre of your lane on the motorway without making continual corrections.

If you’re in the market for a large estate your luck is in. There were already a number of very good options, including estate versions of the Ford Mondeo and VW Passat. However, we think the new Superb Estate makes even more sense and should be right at the top of your shopping list.

As a package it’s tough to fault. The Superb offers decent performance, low emissions and good fuel economy, along with an enormous boot and more than enough space for five adults to travel in comfort. Still not convinced? Well, it’s considerably cheaper than its rivals, too.