We try the all-new Audi A5 in range-topping V6 diesel form. Has it got what it takes to worry the BMW 4 Series and Mercedes C-Class Coupé?... 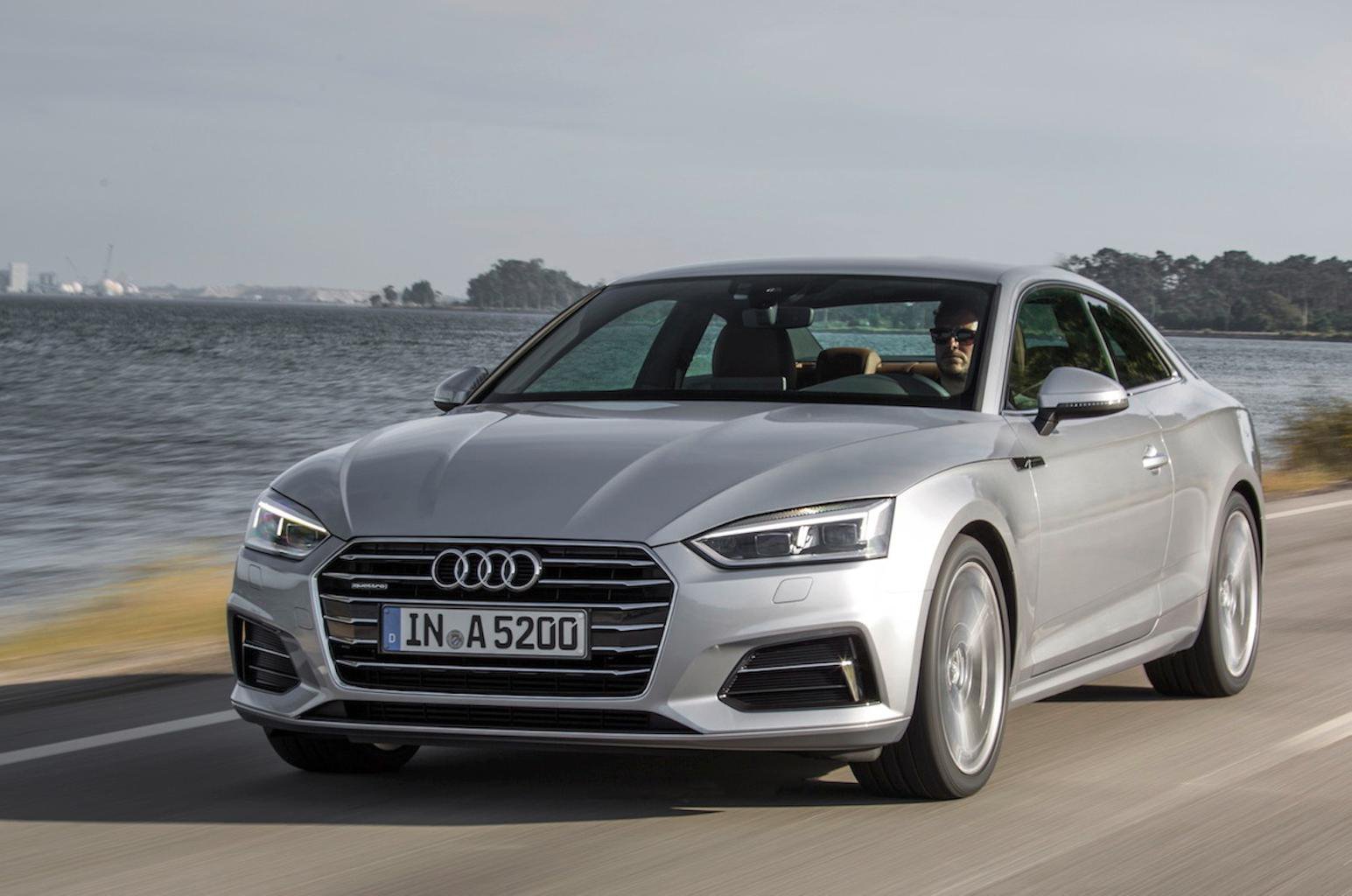 The A5 is the one remaining dinosaur in Audi’s line-up. Originating from a time when Tony Blair was Prime Minister and you could happily puff away on a cigarette in a bar or restaurant, this four-seat coupé has roamed the earth for nearly a decade.

But it’s finally about to become extinct – and not before time, because the current A5 is not only one of the least recommendable cars in Audi’s own range but it’s also long been outclassed by newer and more sophisticated rivals such as the BMW 4 Series and the Mercedes C-Class Coupé.

But there’s an all-new A5 on the horizon and we’re driving it here for the very first time. Based on the same underpinnings as the A4 Saloon, our 2016 Car of the Year, it should be far superior to its predecessor thanks to a more upmarket interior, more powerful and efficient engines and more high-tech gadgets.

It won’t arrive in UK showrooms until November, but when it does it’ll be available with a trimmed-down selection of the engines offered in the A4. The cheapest will be a 188bhp 2.0-litre diesel while the most expensive, at least at the outset, will be the 349bhp turbocharged V6 petrol in the S5.

Depending on which engine you choose, you’ll also have a choice of front or four-wheel drive and manual or automatic gearboxes, and you’ll also be faced with a myriad of suspension options. 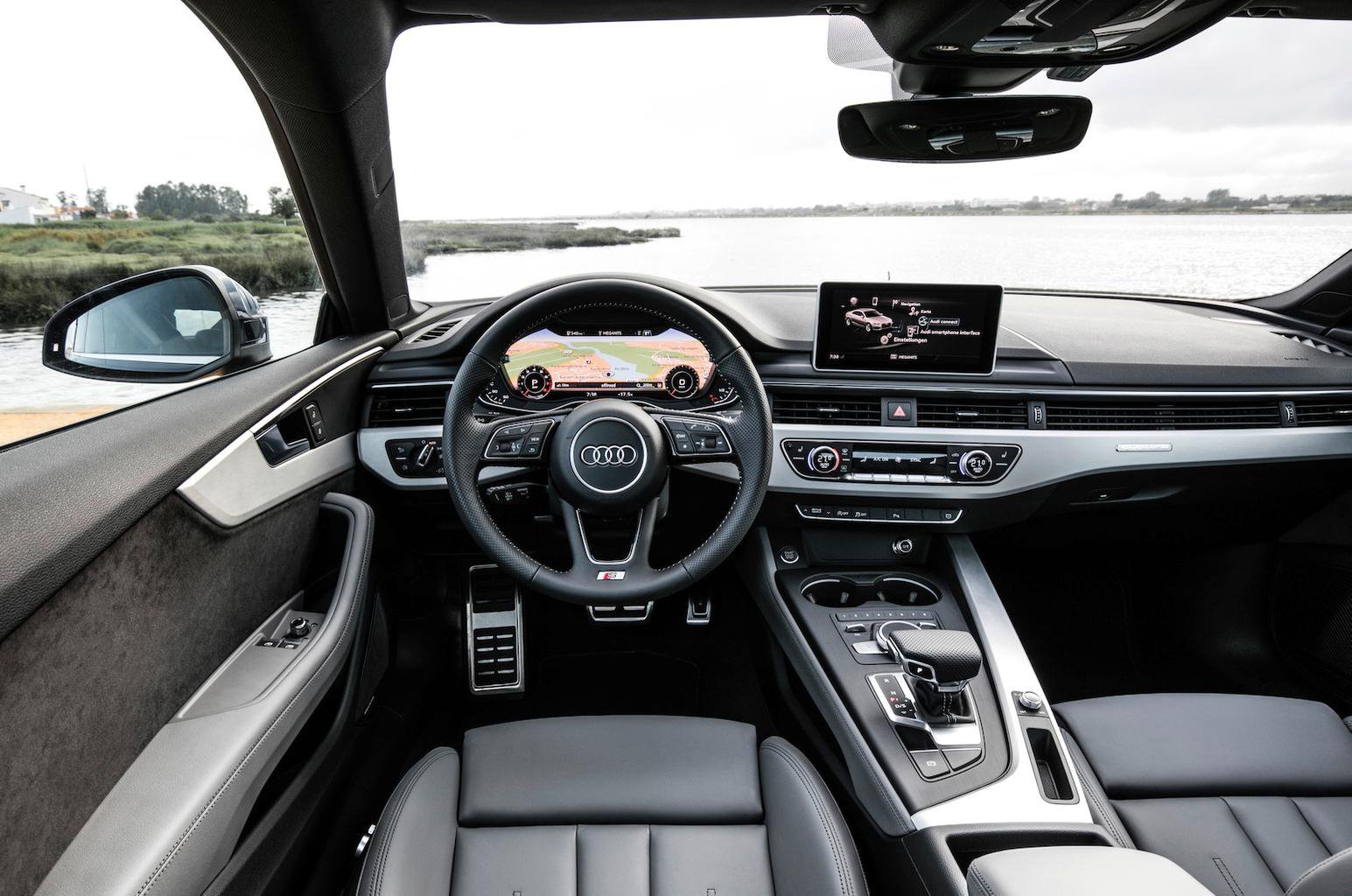 We drove the range-topping diesel model, which is powered by a potent 282bhp V6 engine and gets Audi’s quattro four-wheel drive system and an eight-speed automatic gearbox as standard.

The engine’s outright power is impressive enough but it’s how much torque, or low-down pulling power, it produces that really takes your breath away. A gentle squeeze of your right foot is all that’s needed to build speed rapidly, but put your foot down hard away from some traffic lights and you’ll be doing 62mph in less than five and a half seconds. The accompanying kick in the back is really quite savage, and traction is so impressive that even wet roads provoke barely any wheelspin.

Just as impressive as the 3.0 TDI’s performance is how refined it is. You barely hear more than a muted hum from the engine, even when accelerating hard, and you’ll have to really concentrate to feel any vibrations through the steering wheel or pedals. Minimal wind noise also makes the A5 a peaceful cruiser. Some road noise is noticeable over coarse surfaces, although our test car’s larger than standard 19in alloys and the poorly maintained roads on our Portuguese test route probably didn’t help. 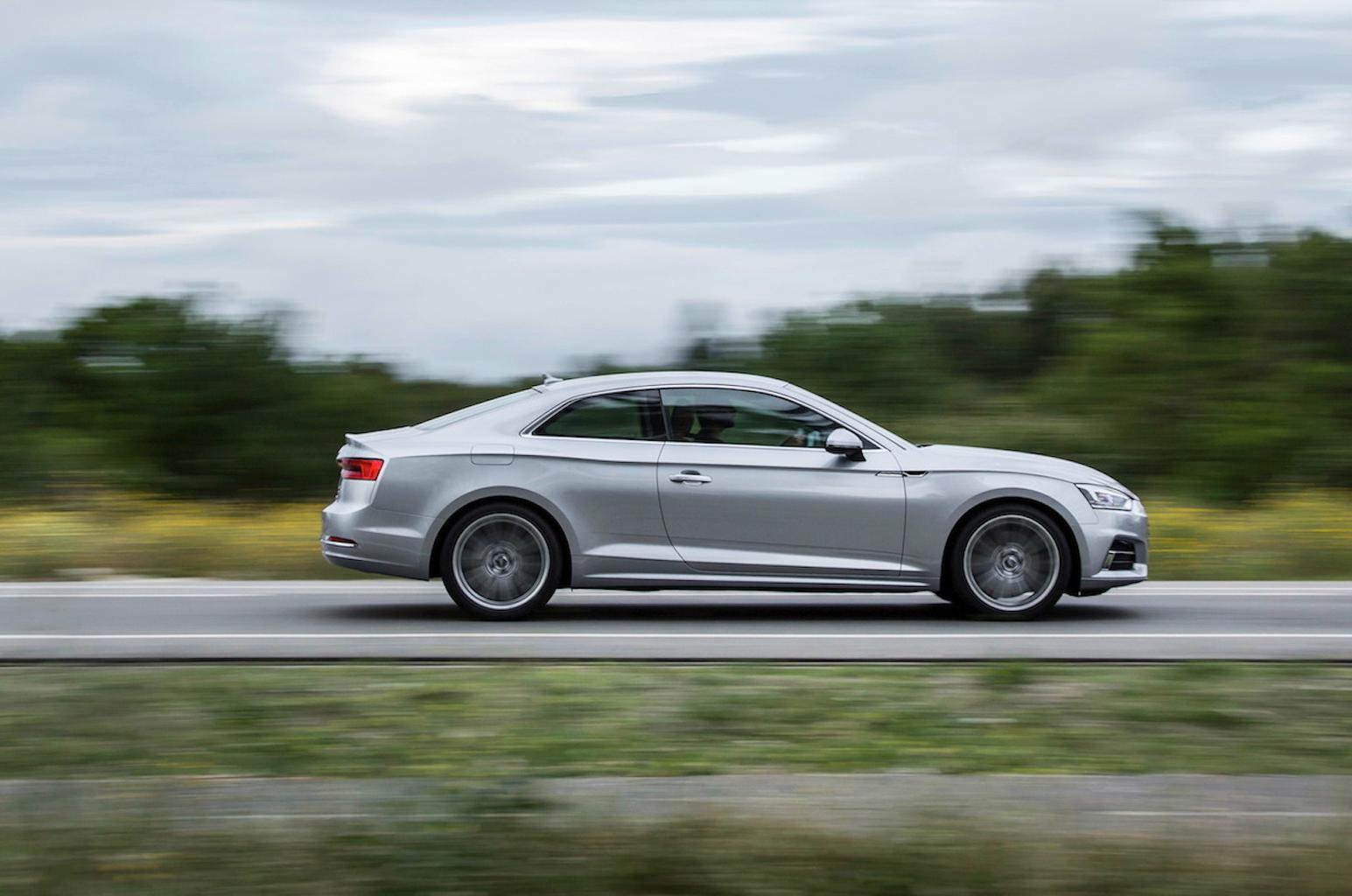 Depending on which trim you choose there are three distinct suspension options. Our car had the sole adaptive setup, which costs extra but is supple enough to take the sting out of smaller ripples and bigger lumps alike. However, our big-wheeled A5 test car didn’t ride sharp-edged depressions quite as well the A4, particularly with the suspension switched to its sportier Dynamic mode. Audi says it’s intentionally made the A5 ‘sportier’ than its boxier four-door sibling because that’s what buyers will expect from a coupé.

That’s sound enough logic, but the truth is if you’re looking for driving thrills from your coupé you’d be better off with a BMW 4 Series. Sure, the A5’s steering is always precise but it never really involves you in the process of going round corners, which is a pity given how much fun to drive Audi’s smaller TT coupé is along a snaking B-road. Mind you, the A5 grips well and, if you switch the adaptive suspension to the firmer of its two modes, there’s little body roll through bends.

We'll need to try the two no-cost 'passive' suspension options before we can tell you if it's worth spending the extra. 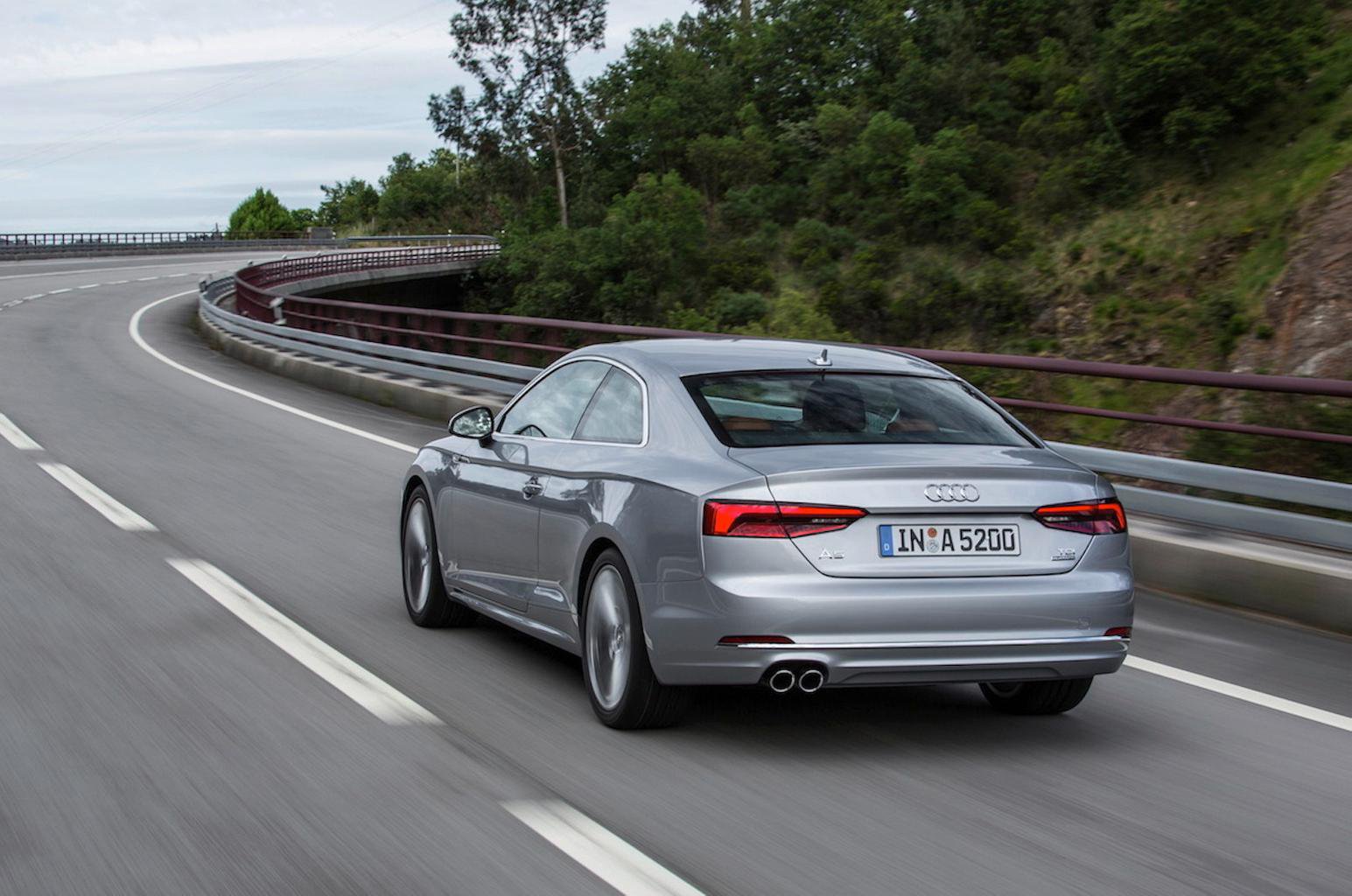 Audi is renowned for its classy, minimalist interiors that are both exquisitely finished and super-intuitive. The new A5 doesn’t disappoint, bettering its rivals from BMW and Mercedes with upmarket materials everywhere you look and a simple, user-friendly dashboard layout.

Audi’s MMI infotainment system comes as standard and features a clear 7.0in display mounted centrally on the dashboard and controlled using a rotary dial sited between the front seats. You twist the dial to scroll through the on-screen menus and press it down to select, and there are some handy shortcut keys to take you straight to specific functions. Sat-nav comes as standard on all trims, although the digital Virtual Cockpit shown in our photos – a 12.3in screen that takes the place of the standard analogue instrument dials – costs extra.

The driving position is tough to fault, with plenty of seat and steering wheel adjustment and a comfortable seat that provides plenty of upper back support. It’s a shame you have to pay extra for adjustable lumbar support, though. It's an extra we’d advise you to fork out for if you plan to spend hours behind the wheel at a time.

Clearly, you won’t be considering a coupé if space is your number one priority, but the A5 isn’t as impractical as you might imagine. A couple of six-footers will fit in the back easily enough, although they’ll have to slouch the keep their heads from brushing against the ceiling. Officially, there’s more boot space than in a 4 Series or a C-Class Coupé and, while the differences are small, the A5’s load bay is certainly usefully squarer than those of its rivals. 40/20/40 split-folding rear seats are standard, and when folded down they leave only a gentle slope in the floor of the extended loadbay.

Prices haven’t been confirmed but expect to pay around £2000 more than you would for an equivalent A4 saloon. That means this range-topping 3.0 TDI quattro will cost from around £42,000, although the entry-level (and likely best-selling) 2.0-litre diesel should start at a more palatable £33,000.

Whichever engine appeals, if you’re pondering whether to hold off on that 4 Series or C-Class Coupé order, there’s plenty about the new A5 that might make you do just that. It’s plusher inside and marginally more practical than its two key rivals, and the 282bhp V6 diesel engine in this version is an absolute belter.

Pick the right BMW 4 Series and you’ll enjoy a more rewarding drive on a winding country road, but the A5 is the better all-rounder and, in the right spec, should even come close to topping the similarly impressive all-round talents of the latest Mercedes C-Class Coupe.