High-riding Hyundai i20 looks to get in on the booming small SUV market with help from a new 1.0-litre petrol engine. Can it match the likes of the Renault Captur and Suzuki Vitara?...

Hyundai has been slow to launch a small SUV in the style of the Kia Soul, Nissan Juke, Renault Captur or Suzuki Vitara, but while it puts in the hard yards of development work on such a car in the background, it has produced this, the Hyundai i20 Active.

The i20 Active is essentially a high-riding version of the Hyundai i20 hatchback, with some additional kit such as the front and rear skid plates to give it a more exciting, rough-and-tumble look.

While the extra 20mm of ride height is unlikely to help anyone cross a particularly muddy field, let alone do any serious off-roading, the same could be true of many of its rivals, which are attracting buyers by the bucketload at present thanks to a combination of striking looks, a high seating position and all-round desirability.

From launch, the i20 Active will be available with only a new 1.0-litre turbocharged petrol engine with 99bhp. Hyundai has invested heavily in its latest-generation engine and says this one should be capable of returning 58.9mpg, with CO2 emissions of 110g/km.

Chief culprit is the suspension set-up, which is deliberately set on the firm side of comfortable to give the car a sporty edge but which jars on the worst road imperfections. Firm though it may be, the i20 Active still wallows slightly in the corners. Overall, the ride quality is average. Meanwhile the handling is entirely predictable but never offers enough involvement to set your pulse racing.

The engine and gearbox are impressive, however. As is common with small-capacity turbocharged engines initial throttle response is a little slow, but from around 1800rpm there is enough go to get the i20 Active moving along briskly enough, and as you adapt your driving style to the well-spaced five-speed gearbox it is easy to get going and then cruise along at a decent pace without having to rev the engine hard.

That’s just as well, because the engine does get noisy at higher revs. However, there’s rarely a need to venture into that territory, and overall engine refinement is superb, bar the distinctive three-cylinder thrum at a standstill.

The real test, however, will be the figure achieved when we get to True MPG test this car; small capacity engines often shine in official laboratory testing but struggle to translate that into real-world economy. There are exceptions, however, and we’ve yet to test the i20 Active.

What is the Hyundai i20 Active like inside?
If you’re familiar with the Hyundai i20 hatchback, then you’ll be entirely at home in here. The main highlight is the space on offer, from a generous boot through to space for four medium-size adults to sit inside.

There’s plenty of seat and steering wheel adjustment to help get the driver comfortable, and once in you are surrounded by a smart if unexciting cabin. Despite a mix of hard and soft plastics, the impressive build quality and well-judged placing of the cheaper-feeling materials ensures that the cabin has a robust upmarket appeal.

The only real disappointment is the old-school LCD display and surrounding buttons, which have an air of the 1990s about them and which give the cabin an undesirably dated feel. It is an area where rivals are far ahead of Hyundai, with many having large, modern-looking control screens.

Small SUV buyers are spoilt for choice at this price point, and our pick of petrol-powered crossovers is currently the Suzuki Vitara 1.6 SZ4, which is less expensive than the Hyundai and has more all-round merits.

We’d also recommend would-be buyers look at the Renault Captur 0.9 TCe 90 Dynamique Media Nav at around the same price point as the Hyundai. The Renault receives four stars in our ratings and offers an intriguing mix of space, practicality and all-round appeal with competitive buying and running costs.

At around £1200 more than the equivalent hatch, and with slightly more kit as standard, we can understand why i20 hatch buyers may look to stretch their budget. However, overall, while we could understand why a buyer would opt for one, the i20 Active can’t quite mix it with the best of the opposition. 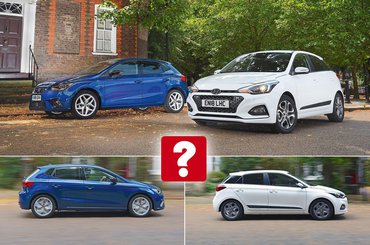