The Mercedes SL was facelifted earlier this year. We've already driven the entry-level V6, now we drive the AMG-fettled SL 63 on UK roads... 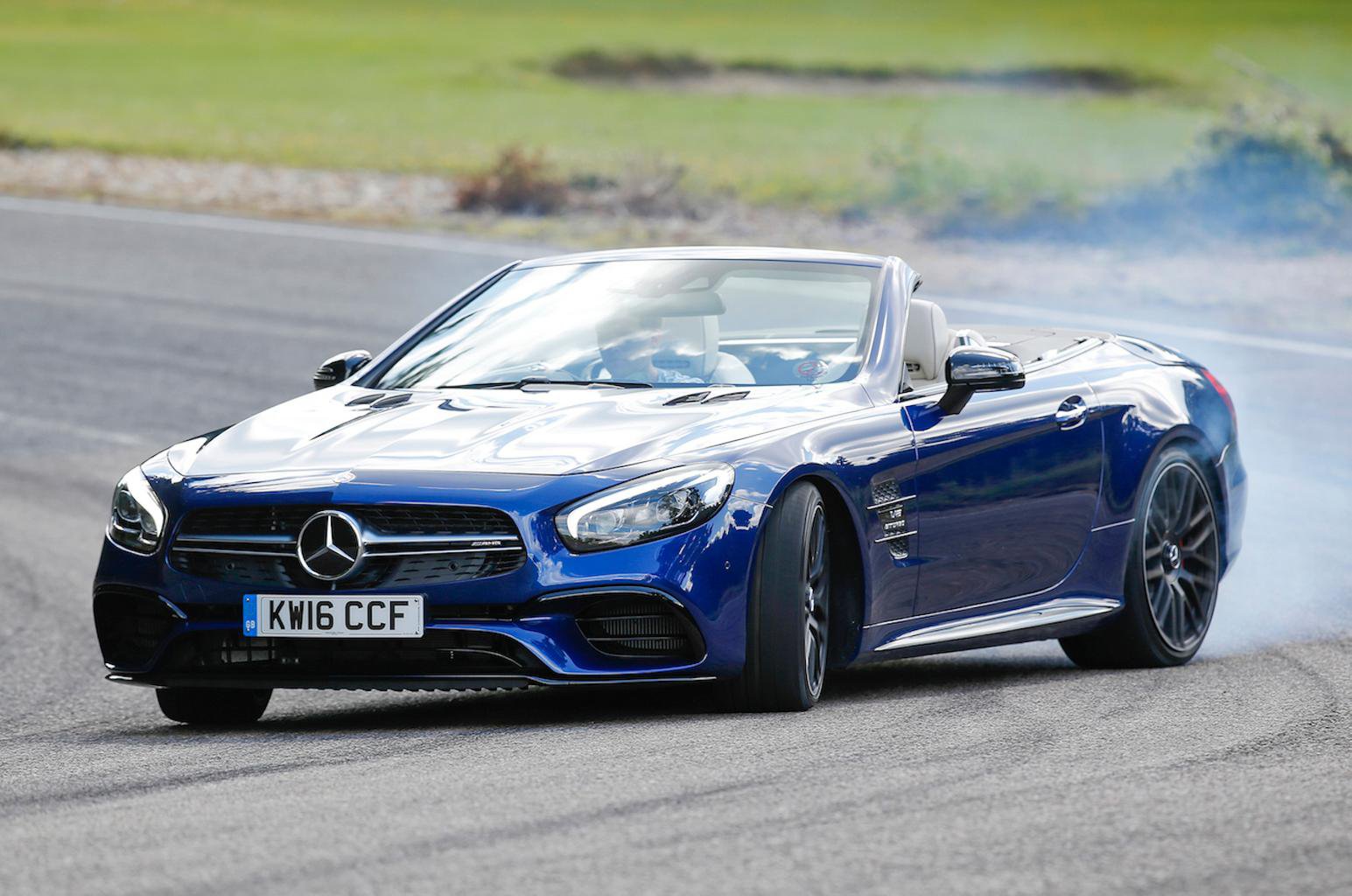 The Mercedes-AMG SL 63 is one of two powerful and focused AMG versions of Mercedes' two-seat open-top SL - the other being the range-topping V12 SL 65.

The SL 63 gets a 5.5-litre twin-turbo V8 petrol engine with 577bhp and a bespoke suspension set-up; the SL has never had a problem with being comfortable, but the aim here is to make it sharper to drive, too.

A seven-speed automatic gearbox is standard and, like the rest of the range for 2016, the SL 63 gets a new headlight, grille and bumper design.

At £114,000, the SL 63 needs seriously financial commitment in order to both buy and run it. It'll also need to be very convincing, considering it's up against fast, luxurious open-top rivals such as the Porsche 911 Turbo Cabriolet, Bentley Continental GTC, Ferrari California T and Maserati Gran Cabrio. 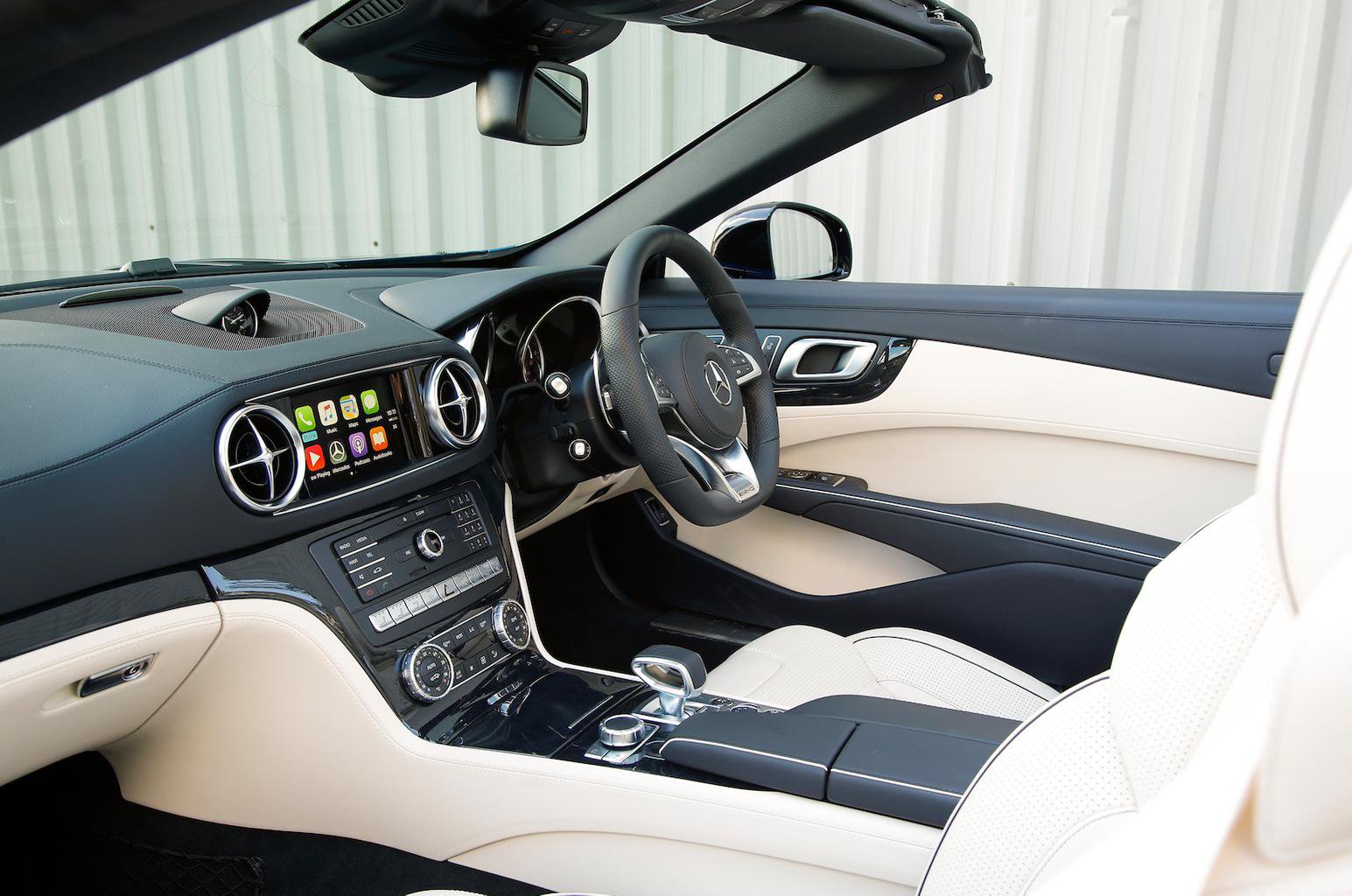 The AMG V8 engine has had to shrink over the years in order to meet emissions regulations. It used to be a massive 6.2 litres, then became a turbocharged 5.5-litre unit like the one in this SL 63, while more recently it has become a turbocharged 4.0-litre motor in Mercedes' newer models.

Despite being smaller, the SL's 5.5 is still a sledgehammer of an engine. It has masses of low down pull in seemingly any gear, and together with the 63's standard sports exhaust is creates one of the automotive world's very best noises at full chat. Happily, it and the 63's seven-speed gearbox work well together in both auto and manual modes. 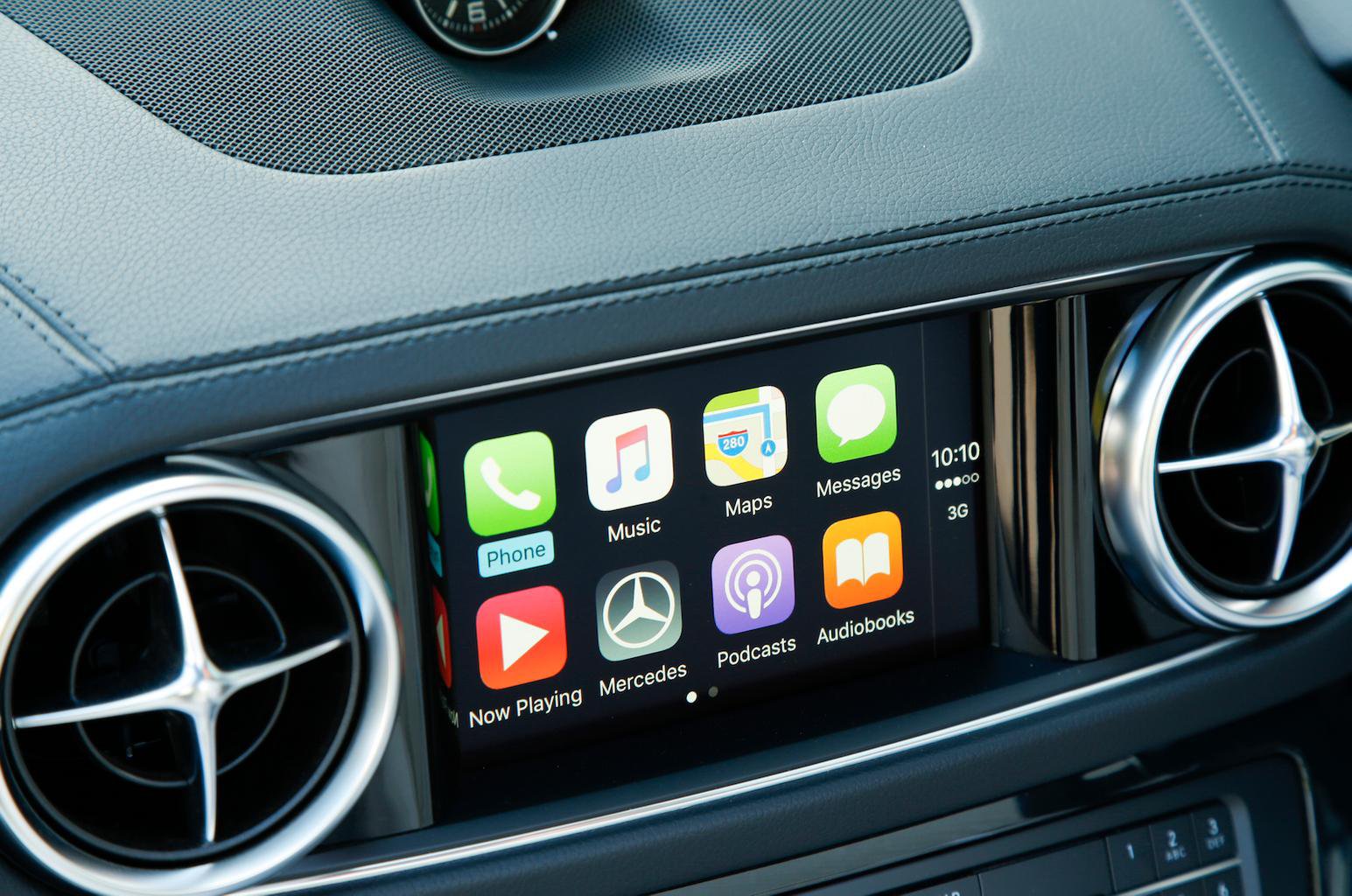 Turning the 63's drive mode dial from Comfort through Sport to Sport+ firms up the car's suspension, makes its throttle more responsive, adds weight to the steering and conjures more eagerness from the gearbox. It all adds up to impressive handling for such a large, heavy car.

Okay, so a Porsche 911 Turbo Cabriolet or Ferrari California T are ultimately more agile, but the 63's steering is nicely weighted and accurate (aside from some straight-ahead lightness) and its body remains well controlled despite its willingness to change direction.

Importantly, and with more skill than most of its rivals, the 63 plays the hushed cruiser just as well. Its ride - as you'd expect - is slightly firmer than the SL 400's we tried recently, but remains nicely compliant over rough roads. With its metal roof in place, there's very little engine, wind or road noise to speak of at speed, either. 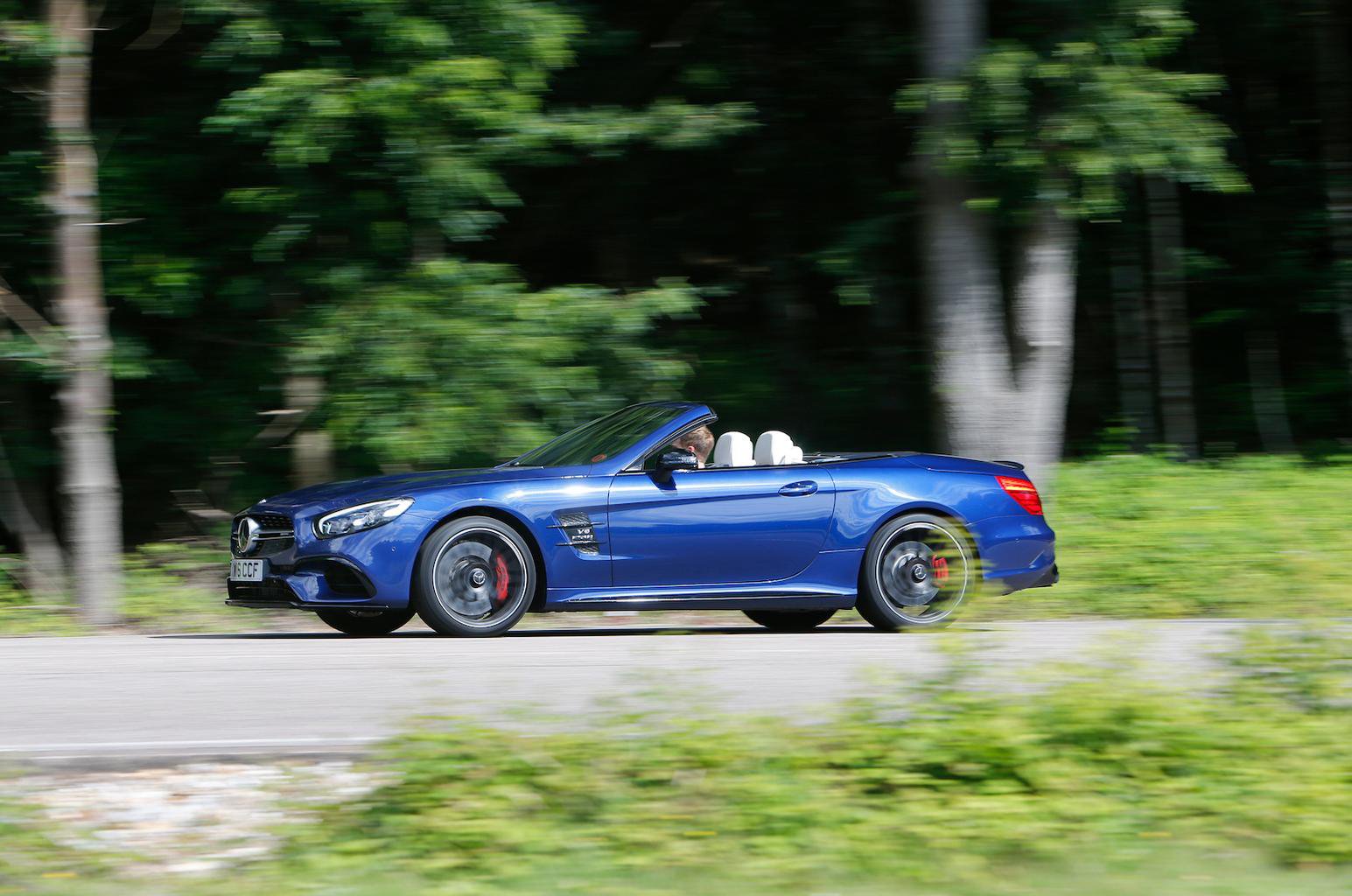 The SL’s interior, like the exterior, has been given mild tweaks only. Even those familiar with the previous one would be pushed to notice.

When we tell you that one of the highlights is that the boot divider – a shelf that must be moved into place, restricting the 504-litre space to 364 litres before the roof can be lowered – is now electric rather than manual, you realise just how little has changed. At least the boot is big enough with the roof closed to carry a decent amount of luggage.

Fundamentally there remains very good space for two people, and the driver still benefits from a wide range of electronic steering wheel and seat adjustment to aid finding the perfect driving position, even with this AMG model's more figure-hugging sports seats. 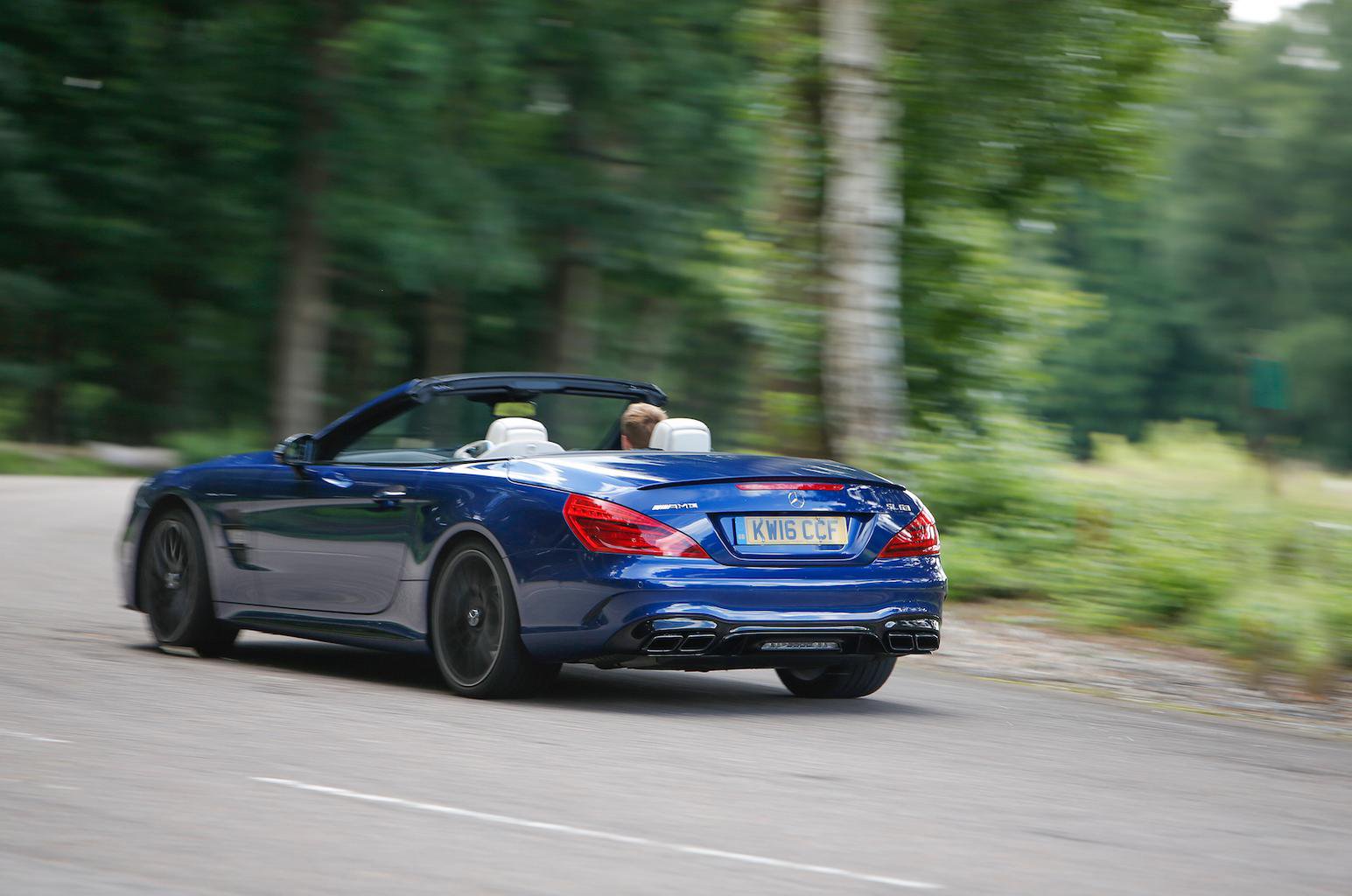 It is a strict two-seater, though, unlike some of its similarly-priced luxury convertible rivals that offer limited space for two more passengers. Putting the roof down takes around 18sec from a standstill, and it's now possible to move off and travel at up to 25mph while it does so. With the top down, those inside are nicely protected from buffeting, even at speed.

If there's a chink in the SL 63's armour, it's that its cabin is starting to look and feel a little dated next to those of its rivals, both in terms of quality and infotainment. It's not surprising; this is a facelift after all, and the SL doesn't yet benefit from Mercedes' latest materials and Comand infotainment system. Even so, the addition of Apple CarPlay as an option improves matters.

There are better handling luxurious open-tops than the SL 63, but few manage to combined smile-inducing handling and laid-back cruising quite so well. It's really only its dated interior which lets the side down - in most other respects you won't be disappointed.

However, if you're more interested in basking in the sun and enjoying what the SL is best at, namely being a brilliant, comfortable and refined place to traverse continents, then we'd recommend saving a large amount of cash and buying the 'standard' entry-level V6 SL 400 or V8 SL 500 instead. They're every bit as comfy, and almost as quick.