One of our favourite city cars, the Volkswagen Up, has received a facelift. We try the new turbocharged version... 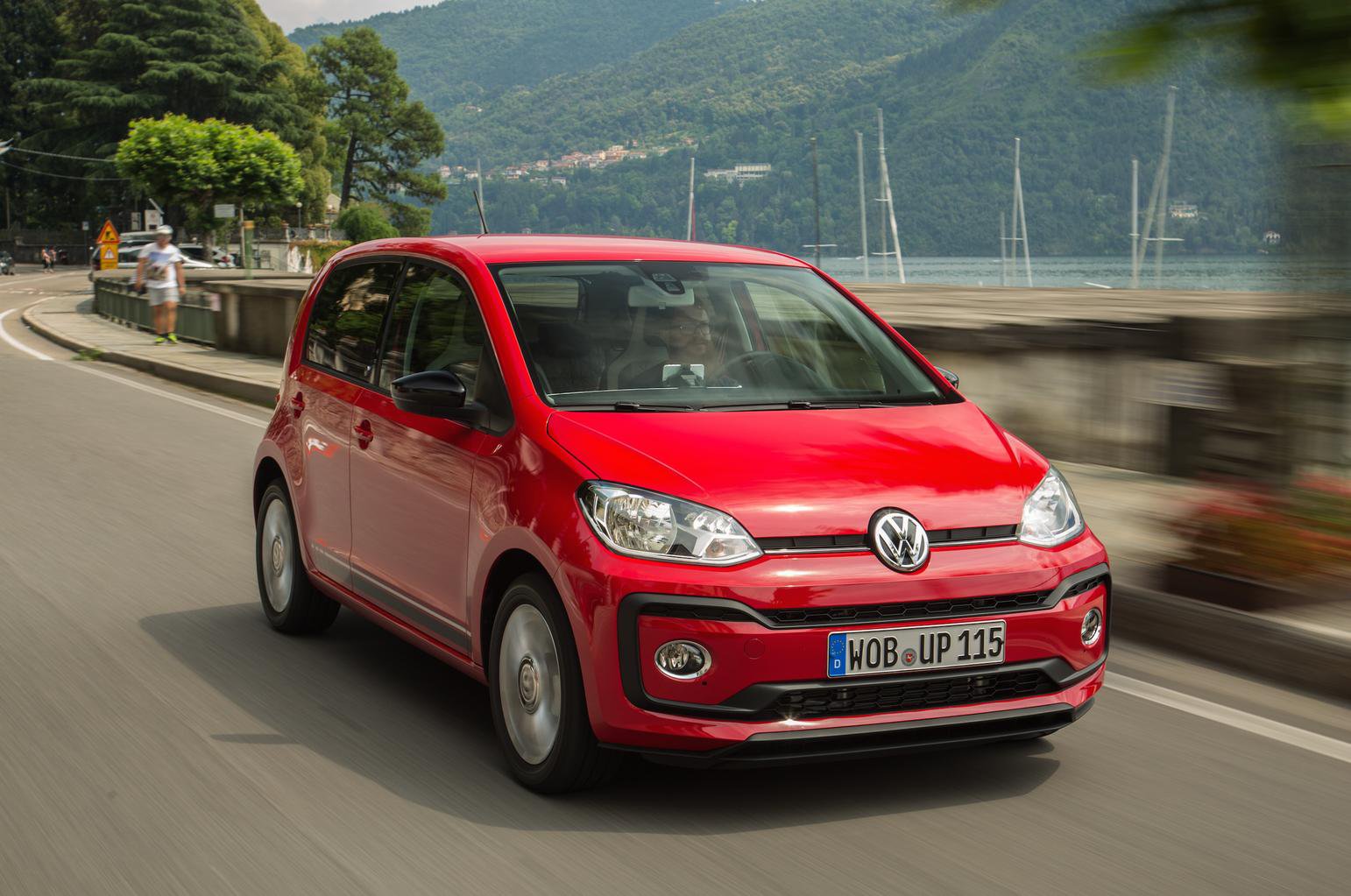 The Volkswagen Up has proved a popular little car since its introduction in 2012. Although it’s spacious, handles well and is one of the more comfortable cars in its class, you’ve always had to work the car’s engine hard to make decent progress at motorway speeds.

That could be a thing of the past due to a new turbocharged version of the Up’s 1.0-litre engine. Although it shares the same 1.0-litre capacity as the current engine, the turbocharger boosts power and adds much more pulling power from low speeds.

Regardless of which engine you choose, the latest Up now comes with new front and rear bumpers, new head and tail-lights, additional customisation options and the option of a new smartphone based infotainment system. We tried a well-specified 1.0-litre turbo to see if it’s even better than before.

It’s fair to say the new engine transforms the way the Up builds speed. Thanks to the turbo, the Up accelerates from as little as 1500rpm and rarely needs pushing over 3000rpm to make good progress. Our only complaint is that it did sound a bit grumbly when worked from such low speeds.

Still, the majority of the time the new engine impresses with its refinement. It’s much quieter than other three-cylinder engines in the range and sends fewer vibrations through the controls, too. Long gearing ensures it doesn’t spin too hard at motorway speeds, making for relaxed cruising. 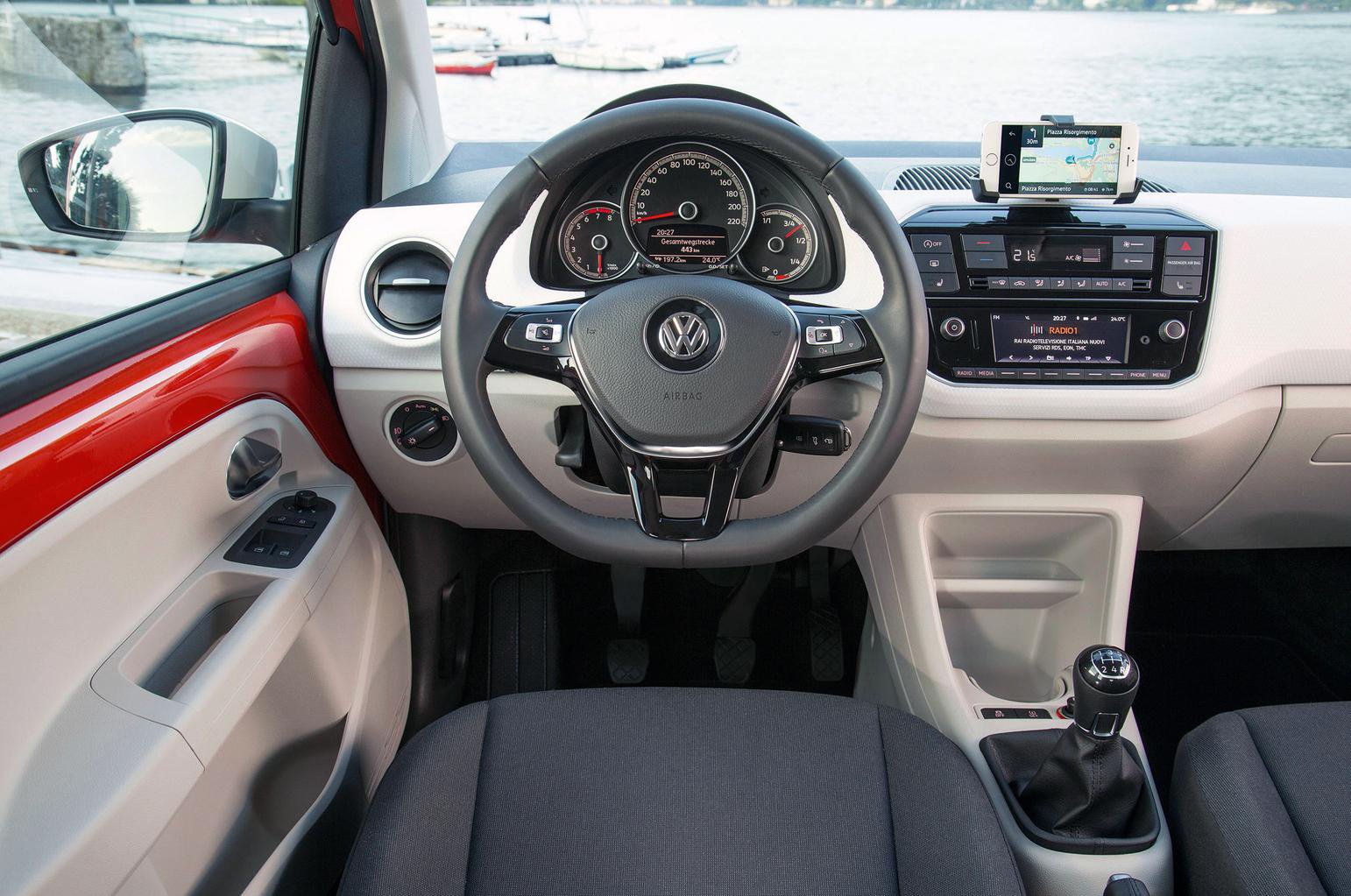 It’s also far more stable than most city cars at speed, feeling like a much bigger car. Despite this, it still feels agile and is a perfect size for threading around town. It isn’t afraid of corners either, proving good fun through a set of bends. It helps that the steering is precise, if a little lacking in feedback from the front tyres.

While the Up is more comfortable than many of its rivals, you do still feel a fair few bumps from the road. This is acceptable when the car is on 15in wheels, but the optional 17in items on our car caused it to crash and bang over particularly rough surfaces. They may look good, but you’re better off saving your money. 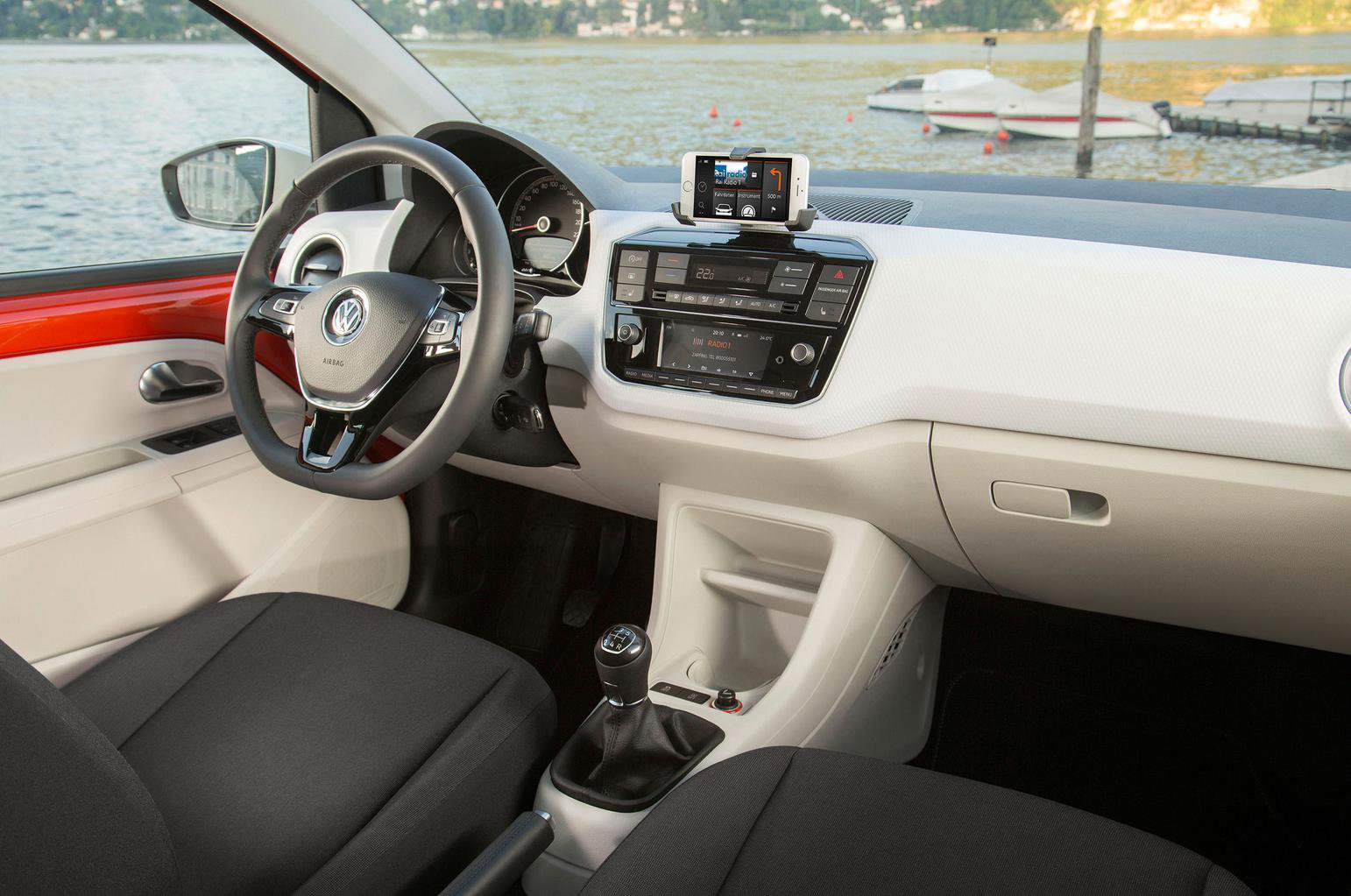 As this is only a facelift, the basics of the Up’s interior remain the same. That means you get a surprising amount of space considering the footprint of the car. This is accessed through either three or five doors.

Head and leg room are fine up front although you might occasionally brush against your passenger due to the narrowness of the interior. Some people may also find the lack of reach adjustment on the steering wheel annoying, although most will still be able to get comfortable. 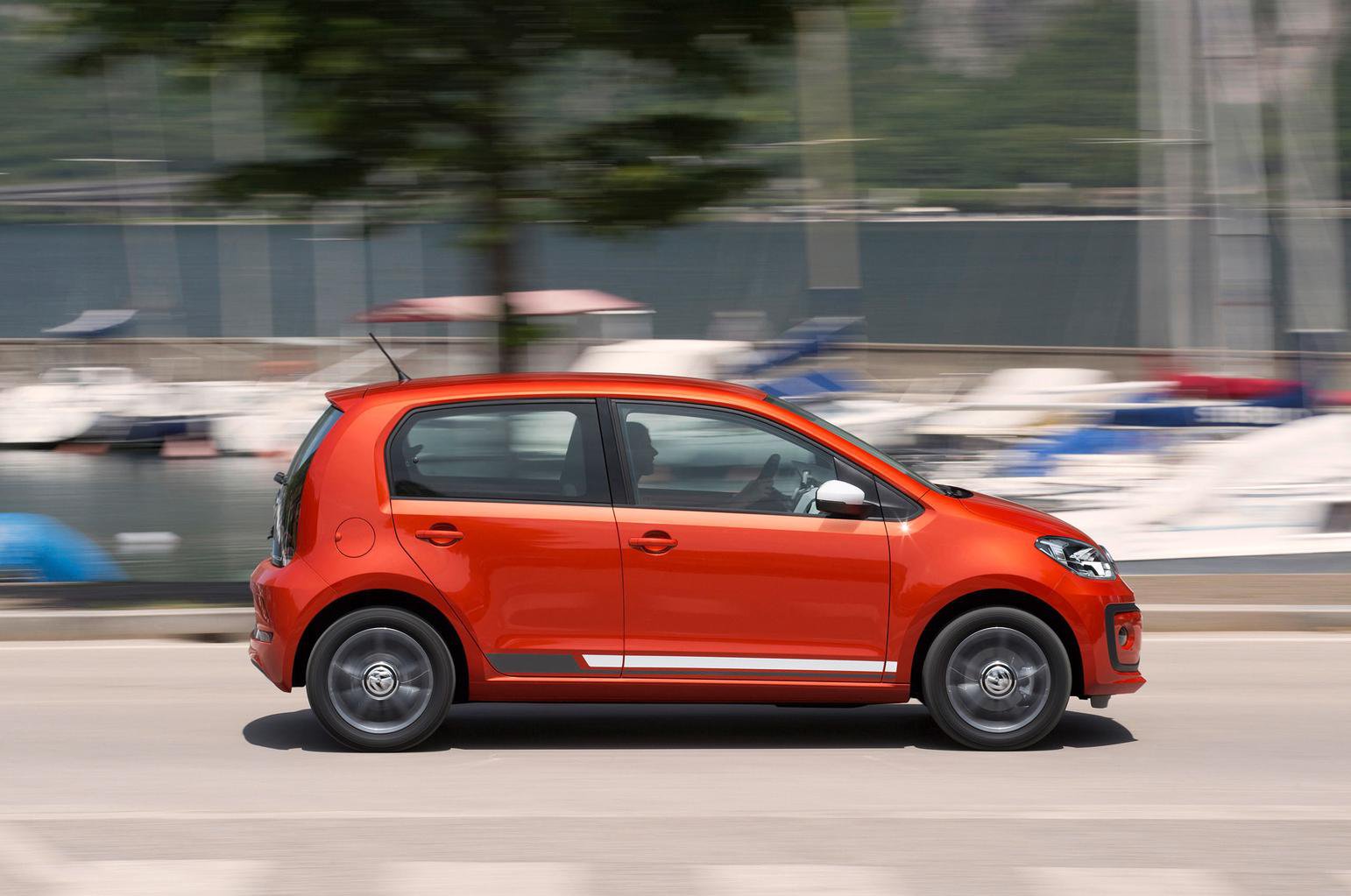 You can squeeze a couple of adults in the back and there’s a reasonable sized boot that offers enough space for a week’s worth of shopping. If you need to carry any more, you’ll probably need to fold the rear seats down.

The biggest news is the move away from the dash-top sat-nav unit that was optional on the old model. Instead, you get a smartphone dock with the higher end infotainment system. This has a 5.0in screen beneath the heater controls and also displays data on your Android or Apple phone. 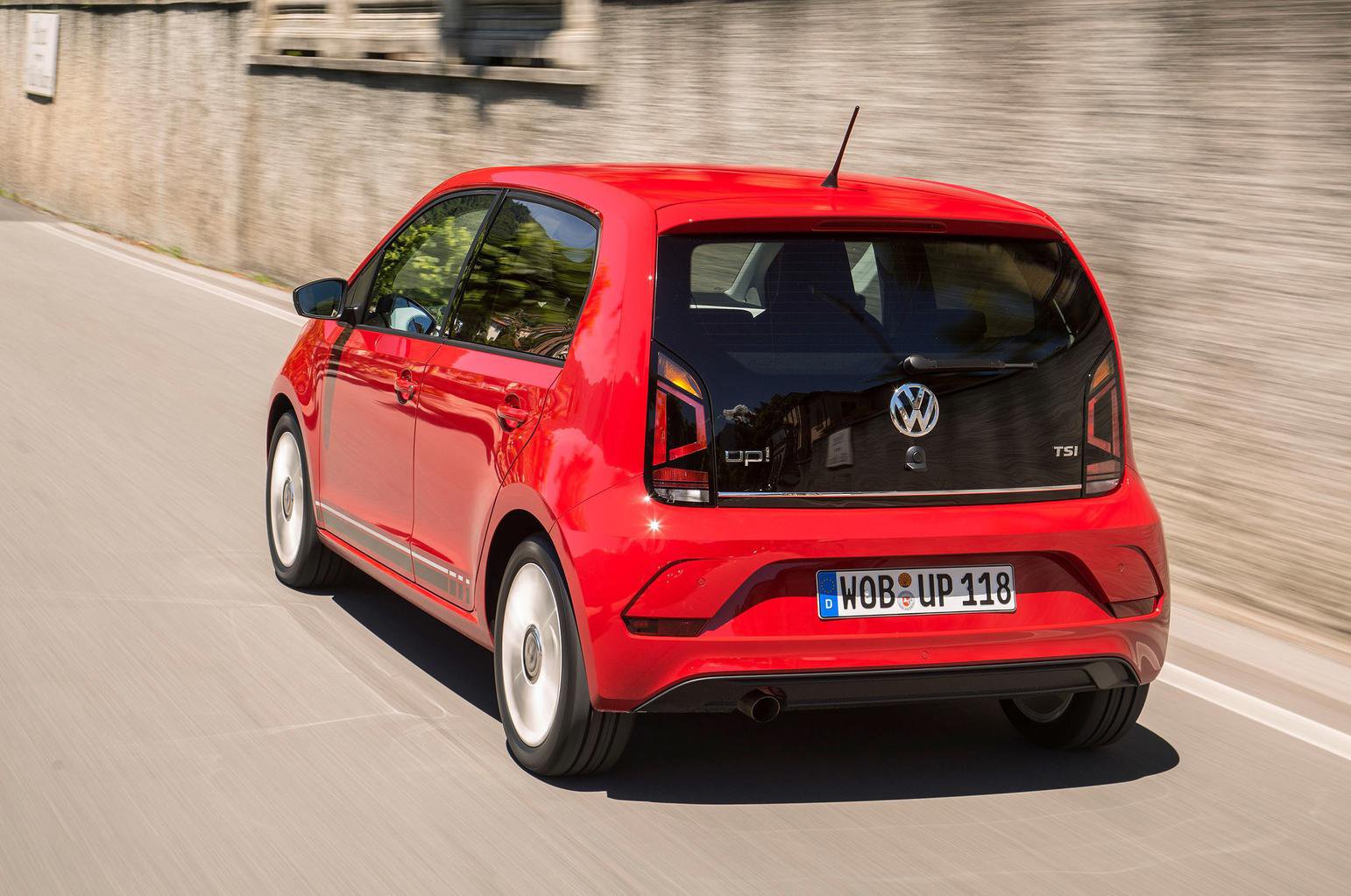 Once you’ve downloaded the free app and connected via Bluetooth, you can control various functions on your mobile and also see driving data. It works well, although the display quality is entirely dependent on your phone. An iPhone 5S screen is a little small for instance, while a 6 Plus is bigger and better. Sadly, the latter is the biggest device you can fit.

If you plan on taking your Up on the motorway often, this turbocharged engine makes a great deal of sense. It offers better performance than the cheaper engines with economy and emissions that are comparable to the base 59bhp 1.0 petrol without stop-start.

If you’re predominantly driving in town, the cheaper, less powerful versions are probably still the better bet. It’s also worth remembering that the Skoda Citigo and Seat Mii are virtually the same car for even less money.