The Mercedes-Benz S-Class is one of our favourite luxury cars. Is it made even better by the introduction of a clever six-cylinder engine?...

The Mercedes-Benz S-Class is one of those rare things: an automotive name so famous that almost anybody could tell you what it is. It has been at the forefront of technology throughout its life, and it just so happens to be our favourite luxury car between £50,000 and £100,000.

But being at the forefront requires constant progression, and the S-Class has just undergone a facelift to keep pace with rivals such as the recently renewed Audi A8 and established BMW 7 Series.

Part of that facelift included the model we're focusing on here; the new, long wheelbase-only S500. The S500 used to have a V8 petrol engine, but it now has a straight-six featuring some very clever 48V electric technology to help performance, economy and smoothness.

So, has it replaced the S350d diesel as our pick of the S-Class range? 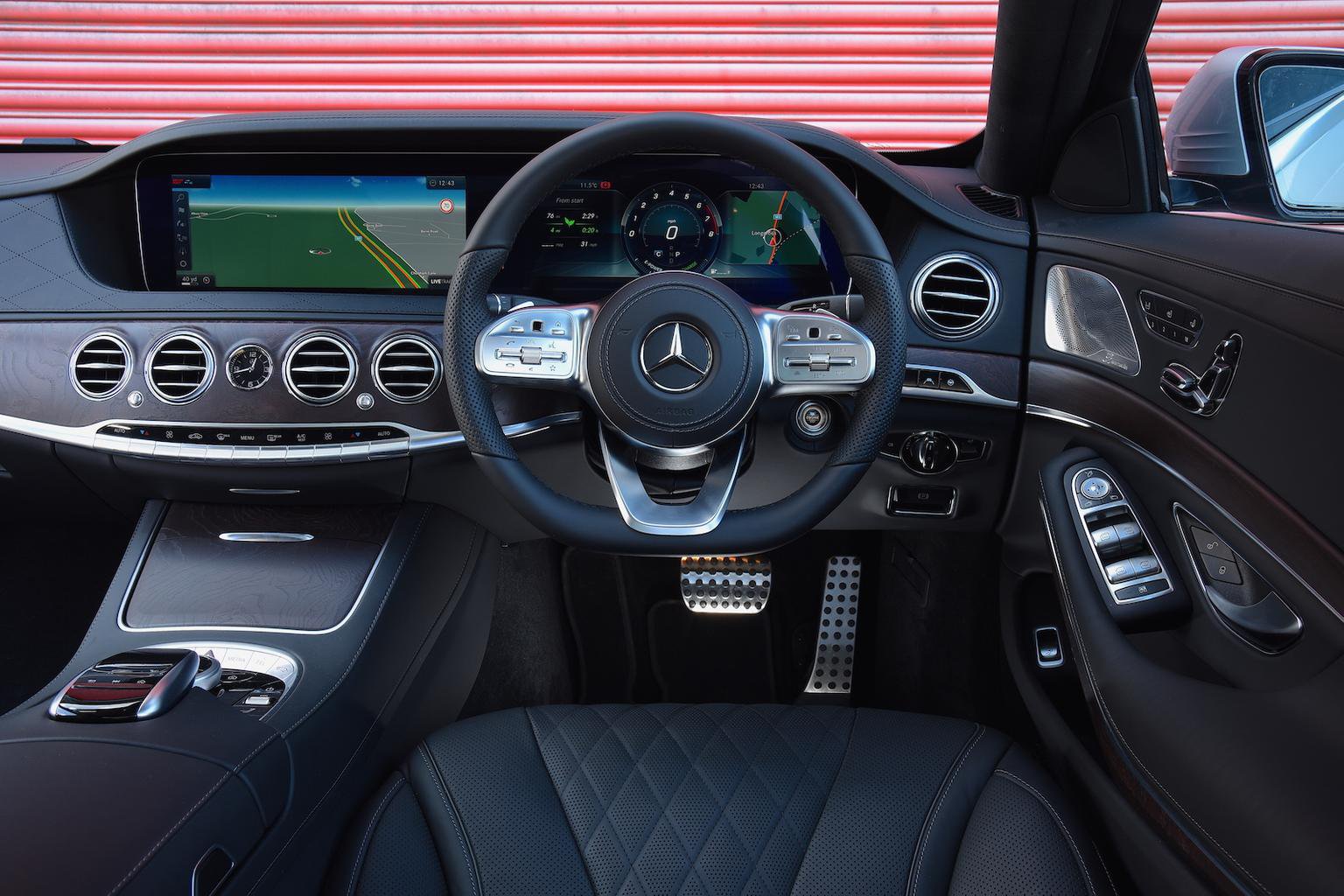 Let's deal with the engine first - there's lots to talk about.

Without getting too technical, the S500 now features a new six-cylinder petrol engine with a turbocharger, an electric compressor, a more powerful 48V electrical circuit alongside its usual 12V one and an integrated starter generator (ISG). The ISG powers the 48V system and is located between the engine and the standard nine-speed automatic gearbox, performing the task of both a starter motor, alternator and electric motor.

Essentially, all this allows mild hybrid driving, supporting the engine for short periods to improve performance, recouping energy and sending it to the battery when you're slowing down, and making the start-stop function smoother.

It also helps power all of the car's ancillaries, such as its air conditioning and water pump, which can both operate with the engine switched off. As such, there are no belts to be found anywhere on the engine, and the S500 will idle at just 520rpm, making it close to silent while stationary. Lastly, when you move off, the electric compressor is able to kick in before the turbocharger does to make the engine more responsive.

That's all extremely clever, but what's it like to drive? Well, for starters, it's extremely hushed. Even when accelerating hard, the new petrol engine never becomes too noisy nor sends a single vibration back through the car's controls. Talking of accelerating hard, if you do so, the new engine will get you from 0-62mph in less than 5.0sec. That's quicker than many hot hatches.

But going quickly isn't really the point of S-Class - not around corners, at least. It steers with surprising precision and with a willingness to turn in, but you can never get away from the fact that it weighs more than two tonnes and stretches well beyond five meters in length. It's a luxury car and it handles like one.

It rides like one too, although not as well as we know an S-Class could. You see, Mercedes now only offers the S-Class in sporty AMG Line trim, which means you get the same sumptuous air suspension but large 19in wheels as standard. In fact, our test car was fitted with an optional (£780) 20in set.

The result is a similarly cushioning long-wave high-speed ride on motorways, but if you slow things down across battered Tarmac, there's just too much fidget, considering the S-Class's supposed world-class ride quality. It's far from crashy, but keep the wheels as small as possible if you want your S-Class to ride as it should.

Happily, wind noise at speed is almost non-existent and we're confident that the small amount of road noise we heard was, once again, down to those optional large alloys. 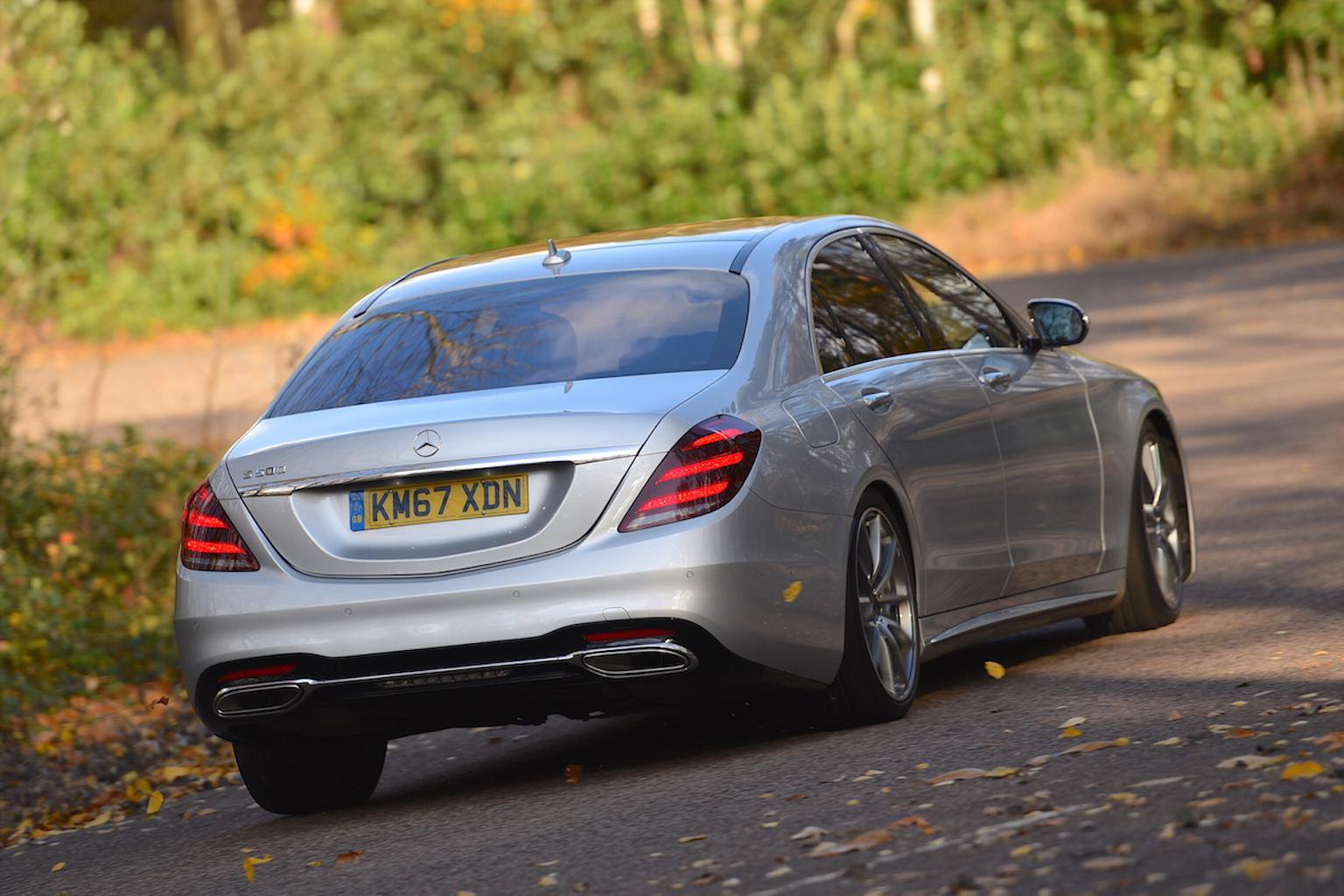 The S500 is available in long-wheelbase form only, meaning even more rear leg room in a car that, in its standard form, is far from stingy with rear space. As such, four tall adults will struggle to find an interior that provides as much room. For more in-depth information about the interior, read our full S-Class review.

What marked out our test car from the standard specification was Mercedes' optional (£5000) Individual Rear Seat Package. This drops the number for rear seats from three to two and allows you to recline the rear seats as well as heat and cool them. There's also a couple of fold-out tables and temperature-controlled cupholders thrown in. However, it does reduce boot space by 30 litres at the same time.

But, together with our car's £4595 Rear Luxury Lounge, which adds two televisions, wireless headphones, a rear passenger-side footrest and a front passenger seat that folds forward out of the way, there are few better places to cross continents on your way to that important meeting.