There can be few people on the planet not familiar with the campervan concept, thanks largely to the iconic, long-lived and much-loved range of Volkswagens built for the purpose over the decades. Even people who hate the idea of camping usually have a soft spot for the thought of living the California Dream in one.

Of course, that lazy-day, carefree attitude rarely goes hand-in-hand with the realities of owning and running one, and that is especially true when you consider the more-than-£50,000 entry-level price for this latest entry to the market, the Mercedes-Benz V-Class Marco Polo. Even on a lease with a £11,000 deposit, you’ll be spending more than £600 a month to own it, making the experience very much at the glamping end of the price scale.

And, much as with a posh bell tent, the beauty of the Marco Polo lies within rather than with its exterior looks, which are a light development of the long-wheelbase version of the V-Class van, upon which it is based. From the outside, then, it is nothing extraordinary. Climb inside, though, and the wooden floor and well-kitted kitchen get the excitement flowing. As keen historians will know, Marco Polo was a 13th-century explorer and author; chances are he dreamed of such luxuries as afforded by this namesake van.

Buyers get a choice of two 2.1-litre diesel engines with differing power outputs, both linked to a seven-speed dual-clutch automatic gearbox, and two trim levels, the higher priced of which is more focused on adding cosmetic addenda than any significant kit. 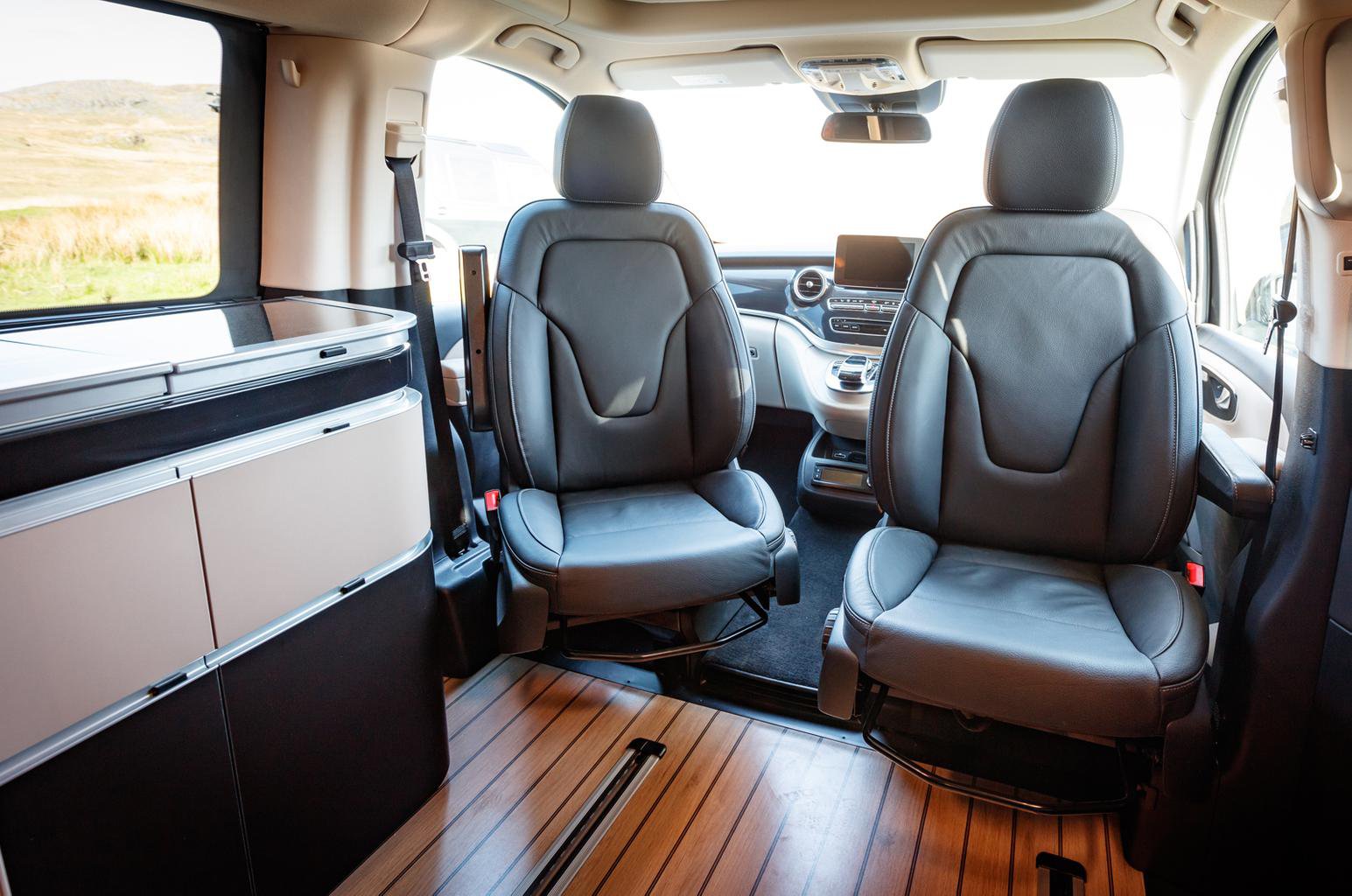 The Marco Polo is undoubtedly big, but the surprise is that it's not unwieldy, thanks to the high-set driving position, large windows and parking sensors and cameras.

The only time the laws of physics are really felt are under braking, when you always need to be aware of the stopping distances for what is a relatively heavy vehicle compared with a car or unladen van. Drive the Marco Polo for any length of time, though, and this is something you'll get used to.

The Marco Polo's four-cylinder diesel engine is impressively quiet aside from a grumble when it is fired to life or sat at idle. While the lower-powered version delivers adequate performance, the additional power of the higher output engine is welcome when overtaking, pulling out of junctions or running with a heavy load, and ensures that you rarely need to stretch it. The automatic gearbox is a silky smooth companion that keeps up nicely with any demands made of it.

Generally, the Marco Polo rides comfortably and handles predictably, but on the bumpiest of surfaces it can get slightly unsettled. Even so, passengers are unlikely to feel anything other than a mild jiggle. 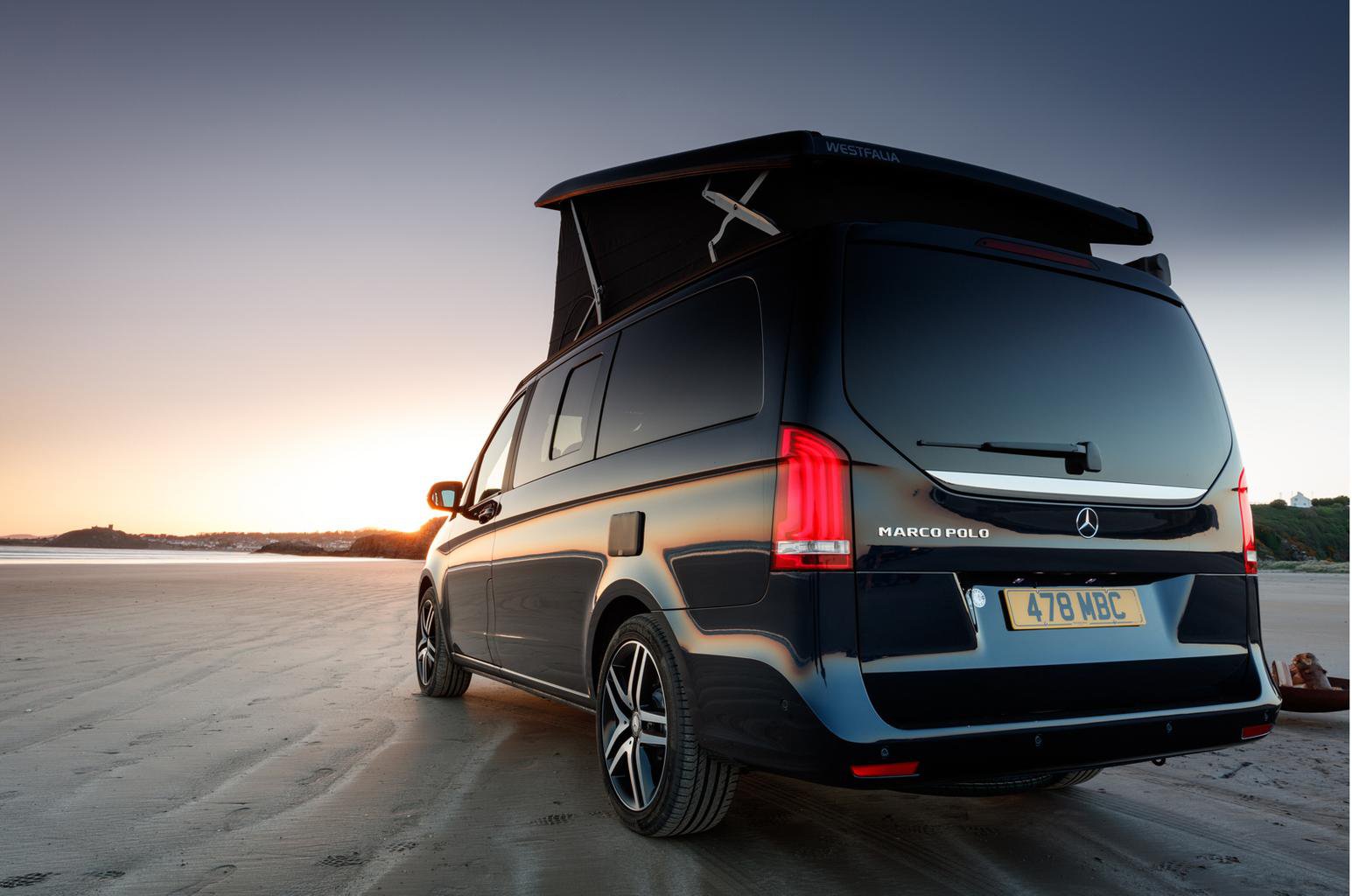 Perhaps for more than any other vehicle, this is what really counts for owners - and it's an area that Mercedes-Benz will swiftly point to for justification of the near £15,000 price rise between an equivalent V-Class van and the Marco Polo.

Climb aboard, either through the front seats or the sliding side door (which it’s worth noting is on the Euro-friendly driver’s side, meaning rear passengers will be entering and leaving into the road in the UK), and it’s hard not to be impressed by the delightful interior.

The standard yacht flooring lifts the ambience immediately, while the two-burner hob, fridge, sink, pop-up table and storage space arrangement hint at the more practical side of this van’s character. The layout is as clever as it is well-equipped, too, with the cooker and sink located at the end where the roof raises higher, all the better for you to be able to use them while standing.

Converting the Marco Polo from transport to accommodation is pretty simple, too. The sliding rear seat bench converts in seconds to a double bed at the push of some buttons. The front seats also rotate round, albeit with the need for some well-planned positioning of the seat before you start the manoeuvre, to create a living or dining room space. The roof sleeping area opens and closes at the push of a button and is released via two simple clips, with the whole operation taking less than a minute.

Niggles are few and far between; the USB ports between the front seats sit below the protruding Comand controller for the sat-nav, radio and other functions, making them hard to access, while the cupholders are more than a long-armed reach away. Such concerns are relatively minor.