We’ve been behind the wheel of Nissan’s new and improved electrically powered hatchback. Can it be the best on offer?...

The Nissan Leaf is a pioneer. Since its release in 2010, Nissan has sold more than 280,000 worldwide, making the Leaf the best-selling electric vehicle on the planet.

However, 2010 is a long time ago, so now, Nissan has released a new Leaf, with a claimed 243 miles of range from a single charge – up from the old car’s official 155 miles.

That’s not the only thing that’s changed; Nissan has also given the Leaf a new look, deliberately making it more broadly appealing and less kooky than the divisive outgoing model. This, along with a raft of other improvements, will help it maintain its position at the top of the EV sales charts.

The previous Leaf was a ‘global’ car, meaning it went largely unchanged from country to country. That’s good for Nissan’s profits but bad for Leaf drivers in the UK, because we typically prefer more luxurious cars than the Japanese market, with higher-quality materials inside. Here, we’re trying it in Japanese market specification. 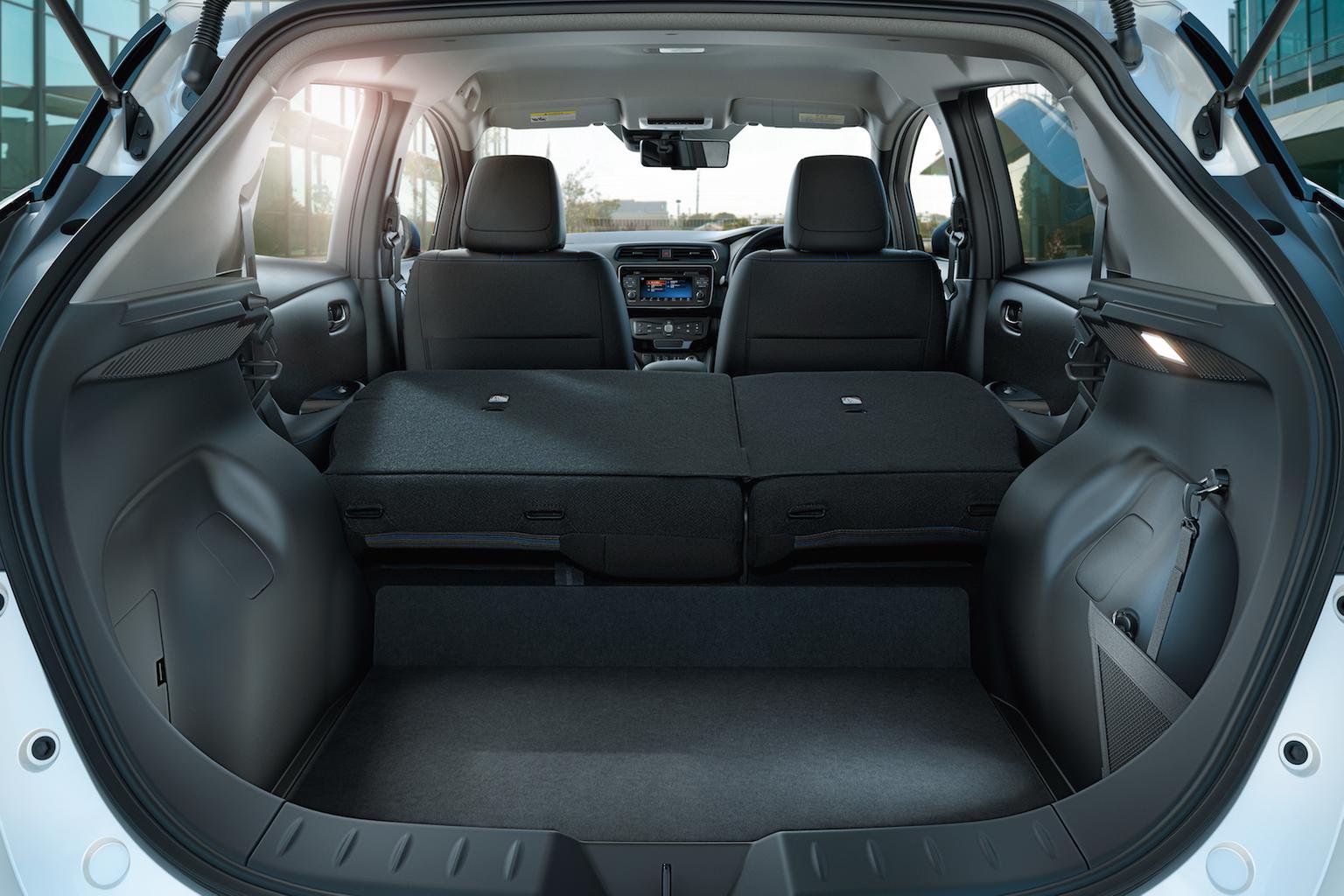 The original Leaf was soft-riding and not all that much fun to drive. The new version is different from the off; it smooths out bumps well for the most part, but overall it feels firmer than before, and Nissan plans to further stiffen the suspension for European buyers. We’d argue that this isn’t necessary.

We enjoyed the instant power of the original Leaf, a characteristic of all electric vehicles. It's even more noticeable in the new car, with a torque boost of around a quarter, to 236lb ft. The electric motor produces 148bhp and is powered by a higher-capacity, 40kWh battery pack, rather than the earlier car’s 30kWh unit.

Braking is very different in the new Leaf; a new ‘e-Pedal’ is at the forefront of Nissan’s innovations. Take your foot off the accelerator and the car gently regenerates electricity. Or, what should be gently; it’s a bit forceful on the regenerative braking, so passengers will bob their heads from the deceleration.

It’s an intuitive system, though; it’ll slow you gradually to a halt, on flat roads or hills, and will slow the car to a stop, unless the accelerator is pressed again. It also holds the car in place when stopped, rather than creeping the car forward. Nissan believes that the e-Pedal could cut down on around 90% of regular braking done by the driver.

Noise is rarely an issue for electric cars, but remarkably, Nissan has made the Leaf even quieter than before. True, you notice road noise more as a result, but it's never in any way loud or intrusive.

As before, the Leaf isn't much fun to drive. The Leaf's initial squirt of acceleration is about as exciting as it gets; there’s no feeling to the steering, and it’s a bit indirect. Nissan says its steering will be made quicker for the UK market, taking around two turns lock to lock, rather than three turns for Japanese cars. Whether that makes it more fun to drive is yet to be seen.

A key point of the new Leaf is its Propilot system, which, when selected, can control the car’s acceleration, steering and braking, providing you stay in one lane. You need to keep your hands on the steering wheel when using the system, and, of course, your eyes on the road. It’s as easy to use as adaptive cruise control; just press the Propilot button, set the speed you’d like the system to default to when there’s no car in front of you, and it’ll stick to it, or maintain the same speed as and distance from the car in front, when there is one. A beep a few seconds later, and an icon on the instrument cluster appears, signifies that the car is now able to steer itself.

Also new to the car is Propilot Park – a self-parking system that, according to Nissan, beats all other, more clumsy systems that have come before it. It’s controlled from the infotainment screen, which shows a bird’s eye view of the car and highlights parking spaces available. Hold down the Propilot Park button on the centre console and the car will park itself, controlling steering, acceleration, braking and gear selection.

Let go of the button – say, if a pedestrian ambles into the path of the car – and it’ll pause instantly, resuming when the button is held down again. A particularly impressive function of the system is its ability to let you select a space when there are no marked bays, guided by a box that can be moved by the driver to highlight the gap into which the car will then manoeuvre. 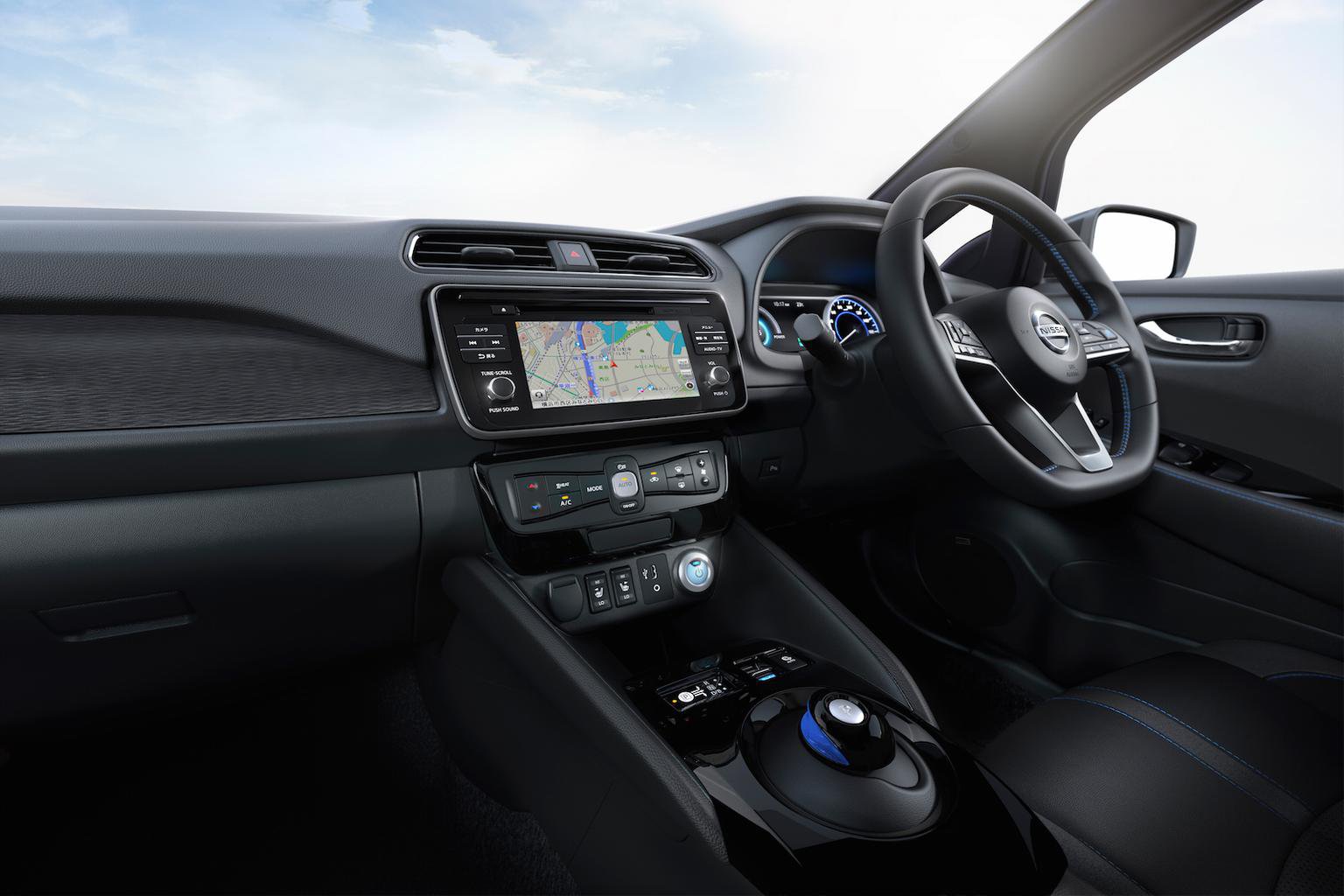 The interior we sampled is another area that’s due to change before the Leaf reaches the UK. The dashboard, which is made from inexpensive-feeling plastic, will be replaced by a unit more similar to that of the Micra, so a little more colour and a lot more plush material will be used, Nissan says.

As it is, though, the dashboard is uncluttered, with a sensible amount of buttons that are clearly laid out. However, areas such as the door cards could use a little more rigidity; they flex slightly when you pull the door shut. Clearly, as one of the things you touch the most regularly, and with the most force, that needs addressing.

The less rakish exterior and more conventional hatchback shape means that practicality should take a boost over the first-generation Leaf, and head room is certainly not an issue for four adults. Even long-bodied six-footers will fit comfortably in the front, and reasonably in the back too.

If there’s one complaint to be made about the interior, it’s the driving position, which is slightly too high in relation to the height of the top of the shallow-angled windscreen. It makes the cabin feel less spacious than it is; if the seat could be lowered just a little more, taller drivers wouldn't feel so claustrophobic. 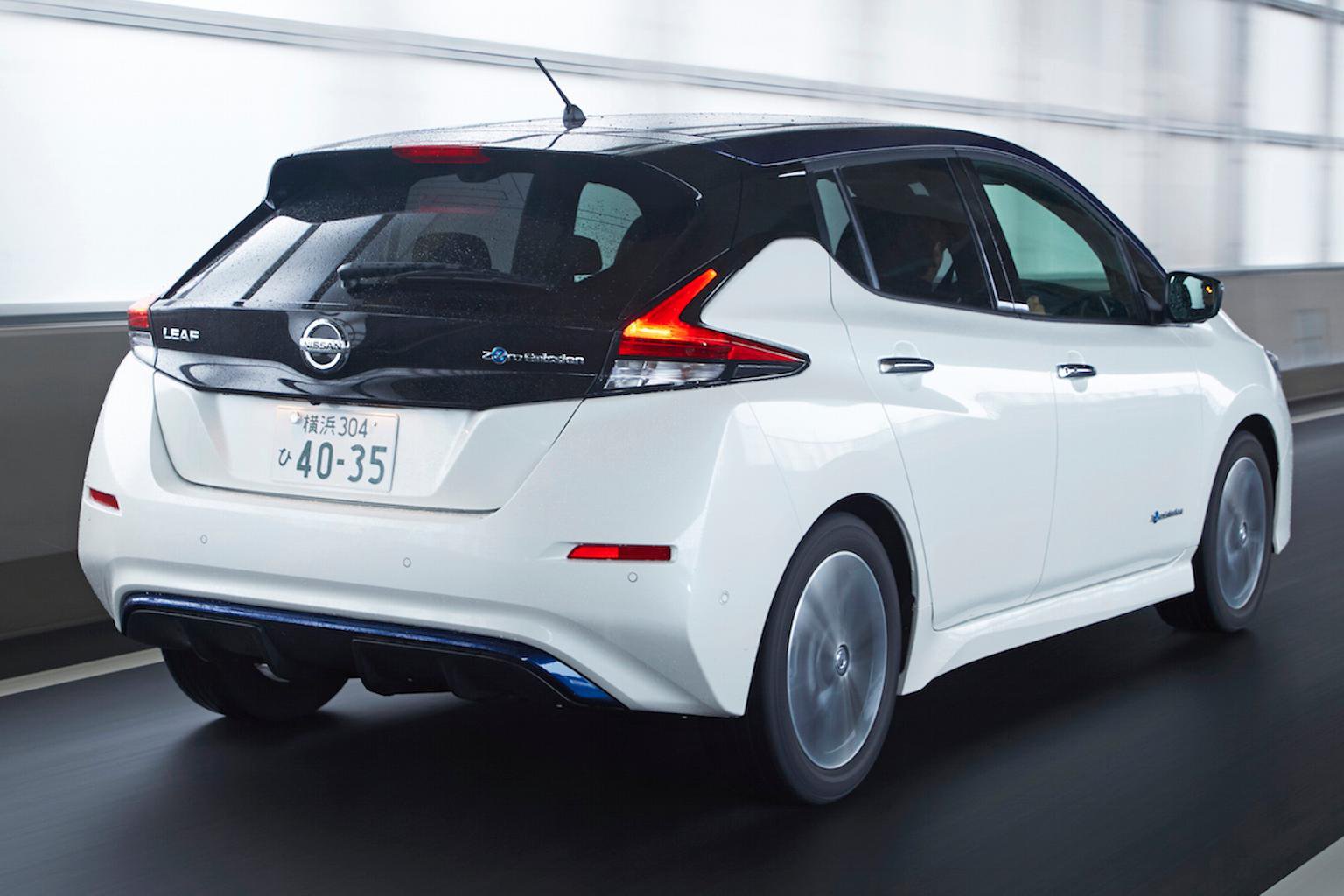