One small step for Hyundai; one giant leap for the car world. Could the Nexo become the first mainstream hydrogen fuel cell vehicle?...

Another day, another family SUV review – nothing to get excited about, right? Wrong. You see, the Hyundai Nexo might be another SUV – albeit an adventurously styled and thoroughly futuristic-looking one – but it's also the first mass-produced, and therefore widely available, hydrogen-powered car to go on sale in the UK.

At this point, you can argue that the Toyota Mirai, launched three years ago, was the first hydrogen fuel cell car available to purchase rather than to lease or loan. But there are still just 45 Mirais on UK roads, with a high list price and a complex manufacturing process creating a natural bottleneck.

Indeed, even Hyundai (which has been developing fuel cells since 1998) struggled to produce its hydrogen-powered ix35 FCEV in high numbers, with only a handful of left-hand-drive examples making their way to the UK. And that's why the Korean manufacturer has taken a different approach with the Nexo.

Instead of being merely a hydrogen-powered variant of an existing model, like the ix35 FCEV was, the Nexo has been engineered around a dedicated platform, which has allowed the engineers to package the fuel cell and accompanying parts more efficiently. The results, on paper at least, speak for themselves: the Nexo will be offered in right-hand drive, has boot space comparable to that of petrol and diesel family SUVs and provides decent space for rear passengers.

Oh, and did we mention that Hyundai plans on selling thousands, as opposed to hundreds? Now that’s ambitious – just like the car's estimated £60,000 price tag. 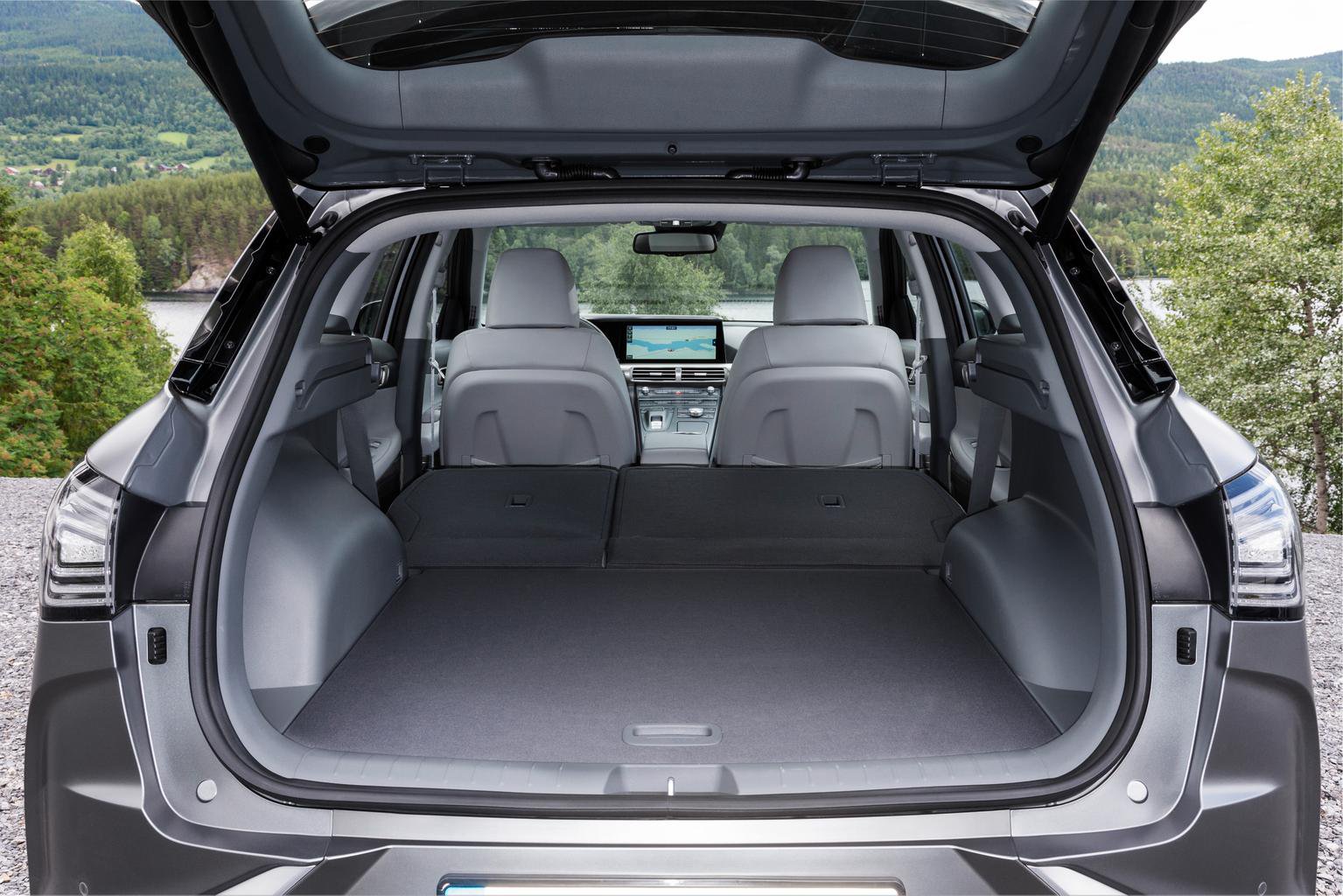 We could go into some serious detail on how the Nexo’s powertrain works, discussing the inner workings of the fuel stack, how the hydrogen atoms split into protons and electrons when they come into contact with an anode and how those electrons travel to an external circuit that operates the electric drive motor.

However, in reality, the two most important points you need to know are these: one, the Nexo drives like any other electric car, and two, it emits nothing but water.

Let’s focus on that first point to start with. Flex your right foot and the Nexo pulls way in near silence, with the chirp of rubber slipping momentarily against Tarmac as it takes off the only audible sign that you are indeed moving. At higher speeds, wind noise and a bit of road roar joins the medley of sounds that would usually be drowned out by a petrol or diesel engine, but none are overly intrusive; the Nexo is far more hushed than the iX35 FCEV, thanks to its more aerodynamic shape and the improved efficiency of its drivetrain.

In fact, it’s hard to think of a conventionally powered family SUV that’s as relaxing to drive in an inner-city environment. And with maximum torque available from a standstill, the Nexo feels very strong off the line – although Tesla drivers (and future Jaguar I-Pace owners, for that matter) are unlikely to be impressed with its 0-62mph time of 9.2sec. Nor, we suspect, will they be that taken with its handling.

This is a heavy car, and it feels it in the bends. Although moderately quick through corners, it feels recalcitrant and unwilling to change direction and then leans noticeably when it finally does so. The steering is also a little difficult to get used to, with inconsistent weighting at faster speeds and very little sense of connection with the front tyres. But then the latter criticism could be levelled at most modern SUVs.

In terms of ride, the Nexo is far more impressive, soaking up the majority of small bumps and undulations remarkably well. Only expansion joints and cracked surfaces send the odd thump through the car's body.

Even these aren't a problem at higher speeds, and the Nexo's driver assistance systems should prove popular with safety-conscious families. With lane-keeping assistance and adaptive cruise control, the Nexo can drive semi-autonomously, although you still need to steer gently to make smooth progress; unlike Nissan’s ProPilot system, if the lane-keeping assistance is left to its own devices (with your hands still on the steering wheel, of course), it tends to pinball beteween the white lines rather than keeping you bang in the middle of your lane. 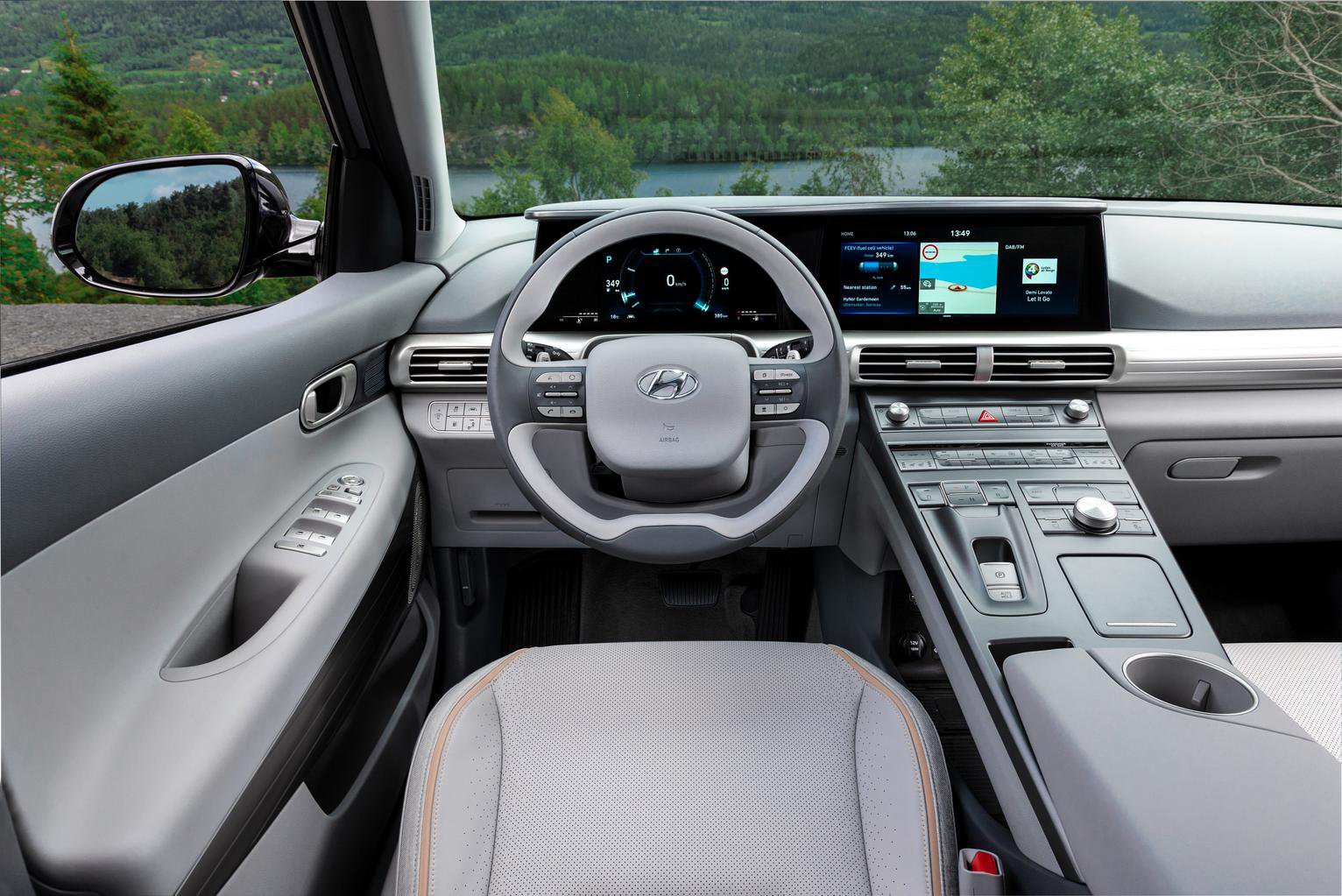 Hyundai isn't exactly known for its interior design, but the Nexo is no regular Hyundai. Step inside and you’re met with a dashboard that looks more reminiscent of high-end Lexus than a Tucson or Santa Fe. You get perforated leather seats, a metallic 'floating' centre console, a 12.3in infotainment touchscreen and a 7.0in display between the instrument dials, all helping to give some real pizzazz.

But while the interior looks the part, it doesn’t necessarily feel the part. Like BMW with its i3, Hyundai has used a number of sustainable materials, such as sugar cane and bamboo, to build the Nexo's dashboard. But unlike in the i3, you wouldn’t necessarily know it. Everything feels a little too plasticky, with hard materials used in a few too many places. This is an SUV that will cost some £60,000, after all.

The infotainment system is also a bit of a mixed bag. We like the fact that it’s responsive and displayed on a vast screen, but the graphics aren’t quite as crisp as those of the Discover system in the Volkswagen Tiguan and the software isn’t all that intuitive to use. It does have the rather cool feature of a blindspot monitor that displays a live image of what’s behind you in the screen between the dials, though. This works as promised, although we still found ourselves looking over our shoulders just in case.

And while we actually quite like the buttonfest on the centre console (because physical touch points are far easier to use while you're driving than a screen), we fear buyers will be less impressed. After all, more or less every manufacturer is moving toward touchscreen-dominated interiors to create that minimalist feel. 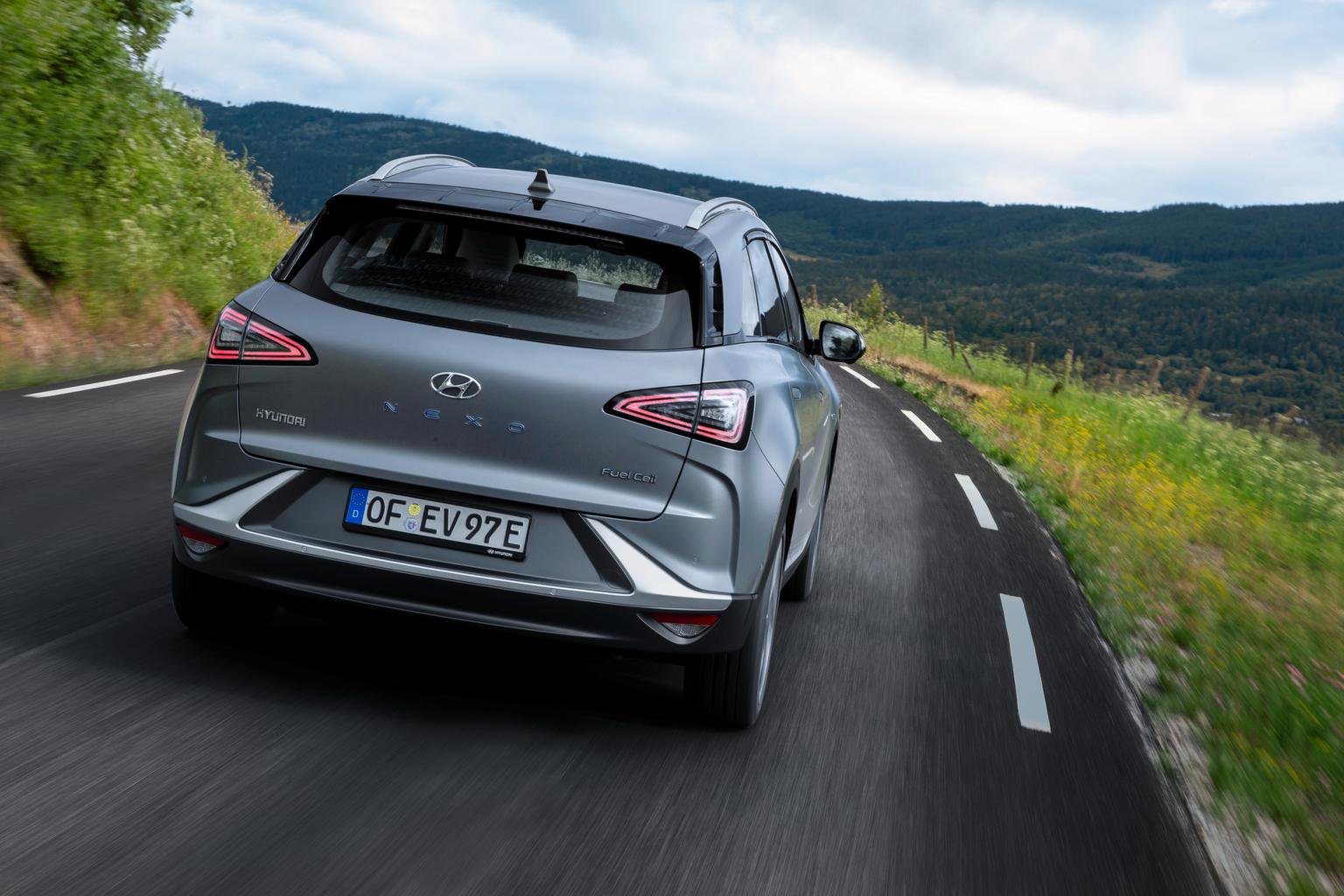 In terms of space, the Nexo continues to score highly. It's actually longer and fractionally wider than the Tucson, and this equates to plenty of space inside, both in the front and rear. Even the tallest of drivers will have plenty of room, and the heated and cooled leather seats are wonderfully comfortable. The rear seats are also impressive, with plenty of head and leg room, although three adults sitting abreast in the rear might be a bit of a squeeze.

The boot is slightly less impressive; at 471 litres, it's smaller than that of the Tiguan and Peugeot 3008. However, when you consider that Hyundai’s engineers have had to fit a trio of carbonfibre hydrogen tanks beneath the boot floor, 471 litres suddenly looks pretty acceptable – it’s still more than you get most family hatchbacks. Factor in folding rear seats with a flat extended boot floor and the Nexo is actually a pretty decent load lugger.