Like its hatchback siblings, the Mini Convertible has received a facelift for 2018. Time to see if sun worshippers should take a closer look...

Considering Britain’s current heatwave, the launch of this facelifted Mini Convertible couldn’t have been timed any better. Like Mini's 3dr and 5dr hatchback models, it has a refreshed exterior look, with new LED lights front and rear, fresh alloy wheels and new paint colours. Inside, all models now get a 6.5in rotary dial-controlled infotainment system as standard, with the option of an 8.8in-screened system that can be controlled by dial or touch.

Mini has also taken its customisation options to a new level, giving owners the chance to design their own trim pieces for the interior and exterior, as well as personalised puddle lighting. Some of these pieces can be retrofitted to pre-facelift models should you want your Mini to wear its pet name with pride.

Cooper S models – like our test car – also get a revised 2.0-litre turbocharged petrol engine that’s said to improve real-world fuel economy by around 7%. If you’re hoping for a bit more fire in its belly, though, you’ll be disappointed: power is still 189bhp, with torque sitting at 221Ib ft. 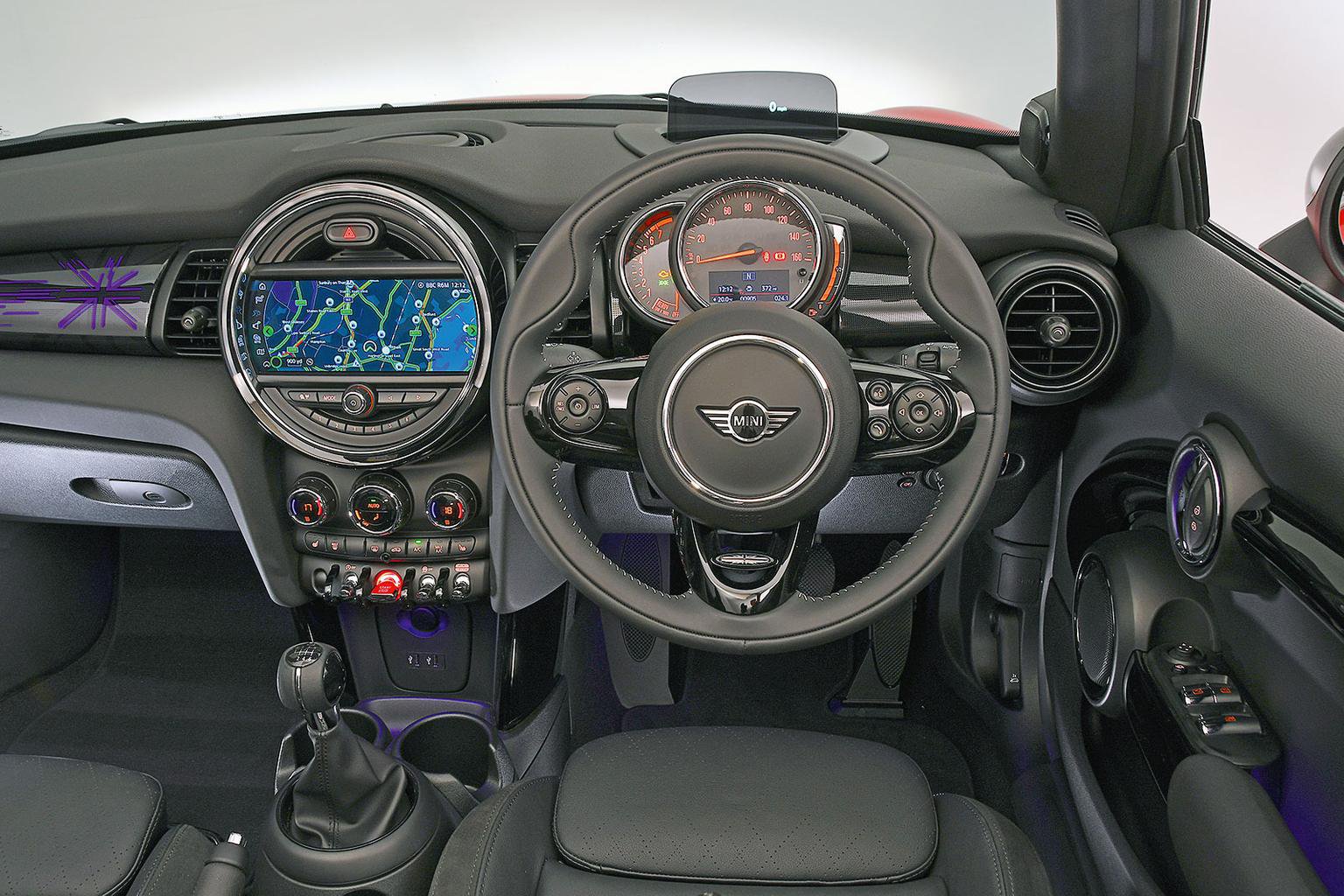 Despite weighing 90kg more than the hatchback upon which it’s based, the Convertible Cooper S can still sprint from 0-62mph in a brisk 7.2sec when fitted with a six-speed manual gearbox. Select the new seven-speed dual-clutch automatic and this drops to 7.1sec. While that’s not much of an advantage, the reduction in CO2 emissions from 154g/km to 129g/km and an 8.1mpg improvement in official average fuel economy are good reasons to consider the auto.

Certainly, the standard six-speed manual is not one of our favourite gearboxes. Its shift is pretty long and rather rubbery, so there’s no real enjoyment involved in changing cogs yourself. Thankfully, the engine has plenty of punch from low down in the rev range, meaning you can happily leave it in sixth gear once you’re above 35mph.

If you do decide to let rip, you’ll find there’s no real reward in revving the engine to its redline. While it will pull strongly from 2000rpm, power tails off in a rather anticlimactic way as you approach 6000rpm. For a sporty little cabrio, this is a bit disappointing, despite the performance being good. At least there’s a fairly fruity rasp to the exhaust and the odd pop and crackle when you put it in Sport mode.

As for the handling, things start off promisingly. The steering is fast, so the nose of the car dives into corners keenly, and the body rolls little. The trouble is that it feels like the rest of the car can’t quite keep up, and you’re never quite sure if it’ll push wide at the front or twitch its rear under hard cornering. There’s no doubt that you’ll have much more fun in a Mazda MX-5.

Still, we doubt many Mini Convertible buyers will ever push quite that hard; big wheels and fat tyres make sure there’s lots of grip, while the stability control system keeps everything in check at high speeds. It’s also worth pointing out that the Mini runs rings around the DS 3 Cabrio and Fiat 500C in the bends.

So, what’s it like when you’re not trying to tear the rubber from its wheels? Even on relatively small 17in alloys, the Mini has quite a busy ride, bobbling around over uneven or crumbling surfaces. Our experience with the hatchback suggests that the optional adaptive dampers (£375) make it more supple in Comfort mode while allowing you to stiffen things up for the twisty bits.

We’d certainly avoid the sports suspension and larger wheels, because even on standard springs and 17in rims you notice a fair bit of body flex over rough roads. Look up and you’ll see the rear view mirror jiggling away, and the steering column shimmies slightly as well. We can’t complain too much, though, because the 3 Cabrio and 500C are even floppier.

It’s also worth mentioning that there’s little buffeting with the roof down, assuming you’ve erected the optional wind deflector. 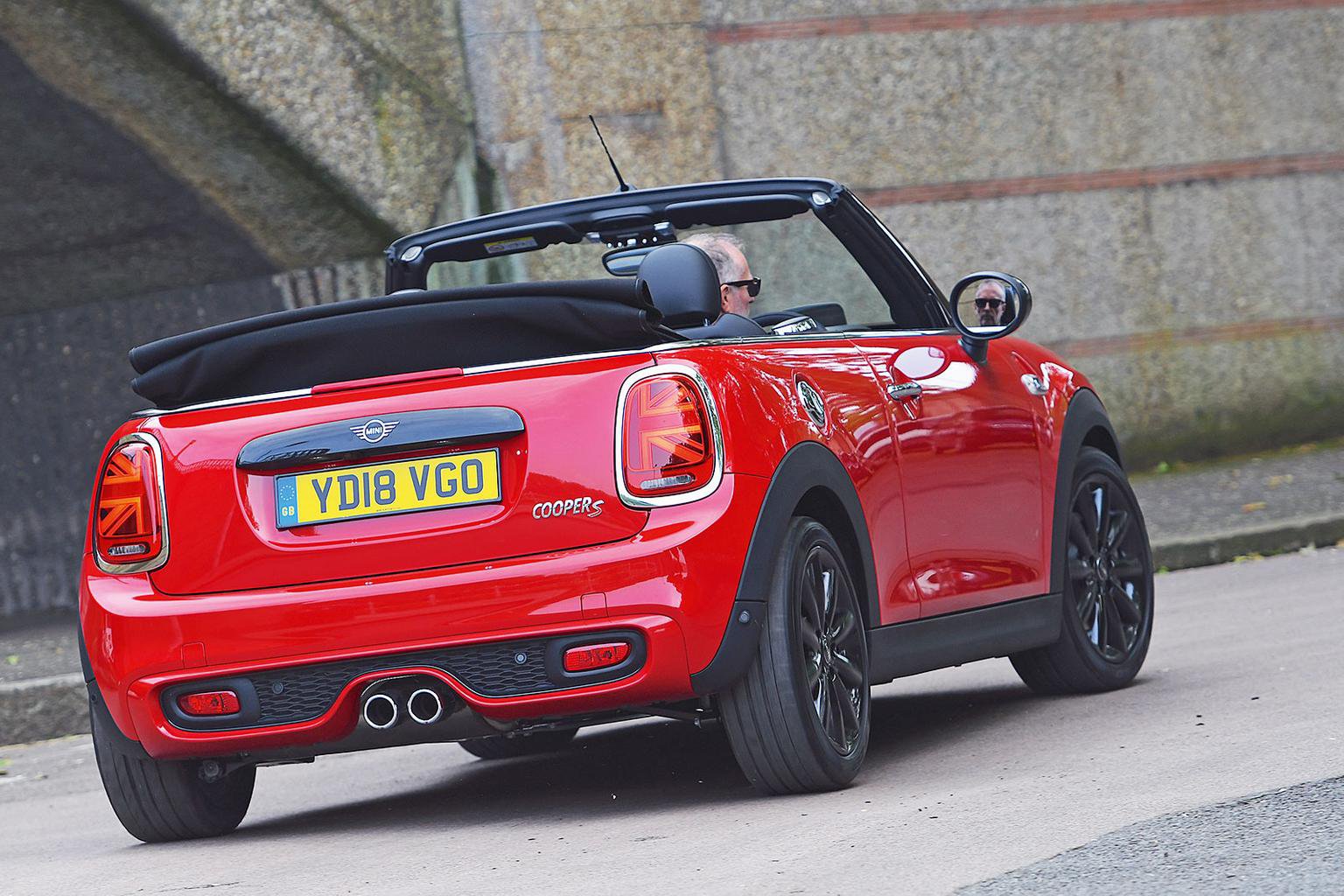 It may have had a facelift, but things are very familiar inside the Mini Convertible. That means it has a retro-themed dashboard with funky toggle switches, high-quality plastics and one of the best infotainment systems in the business.

While the standard 6.5in system is a doddle to use, thanks to its rotary dial control, we’d be tempted to upgrade to the Navigation Plus pack to get the high-resolution 8.8in screen with touch sensitivity, wireless smartphone charging and online services.

If you want to know more about the Mini Convertible, including how spacious it is, have a look at our full four-point review. And if you decide to buy this or any other new car, check out our New Car Buying section for hefty savings.