Benefitting from a sporty makeover, the Volkswagen T-Roc R-Line is the raciest looking version of this small SUV. Is it the best, too?...

Ah, small SUVs. They’re everywhere now, aren’t they? There’s even one for people who don’t want a Golf but can’t quite commit to the Tiguan for rufty-tufty styling and a slightly bigger body: the T-Roc.

So, the T-Roc (which, once boiled down almost dry, is a high-riding Golf) is now available in a racier R-Line trim, with sportier styling, lower suspension and bigger wheels.

Here, we’ve tried it with Volkswagen’s 1.5-litre turbocharged petrol engine and front-wheel drive, having already tried the car in 2.0-litre four-wheel drive and 1.0-litre front-wheel drive forms. Basic maths should tell you that the 1.5-litre ought to slot right in the middle for both performance and running costs.

But with R-Line sitting at the top of the trim tree, it’s worth noting that high-spec Seat Atecas and Skoda Karoqs are around the same money, and they’re five and four-star cars respectively. Not only that, but they also provide a considerable amount of extra space for the price.

So, has Volkswagen applied the R-Line formula to its smallest current SUV successfully? It doesn’t sound like much of a challenge, but the outcome could surprise you…

2018 Volkswagen T-Roc R-Line on the road

The 1.0 TSI engine, being a fizzy three-cylinder, isn’t the smoothest, so it’s reassuring that the four-cylinder 1.5 TSI is an improvement.

It’s flexible enough for everyday use, and even satisfyingly punchy when you need to gain speed in a hurry. Stick your foot down hard in Sport mode and it’s a little less civilised, though, revving almost all the way to the redline before the dual-clutch automatic gearbox changes up.

At the upper reaches of the rev range, the engine feels a little breathless and shouty. However, in all but this most extreme circumstance, it’s quiet and transmits little vibration inside. Not that you’d hear it, mind, because there’s quite a bit of wind noise and a lot of road noise from those blingy 19in wheels and big tyres.

At motorway speeds, the T-Roc R-Line settles a little, but its firm suspension and large wheels send small bumps in the road up through to your behind at most speeds. If you value comfort over looks, we’d stick with Design trim on smaller wheels and avoid the sports suspension.

The T-Roc handles well for the class. It's Golf-like in its composure around corners and doesn’t feel much taller than its sensible sibling. Admittedly, decent handling is a trait across the T-Roc range, with the R-Line’s suspension only accentuating it.

As in other T-Rocs, though, the steering gives little in the way of feedback . It’s quick, direct, weighted nicely in Sport mode and comfortably easy in Comfort mode, but it feels just a little detached, in that you don’t get much information about what the front tyres are doing. 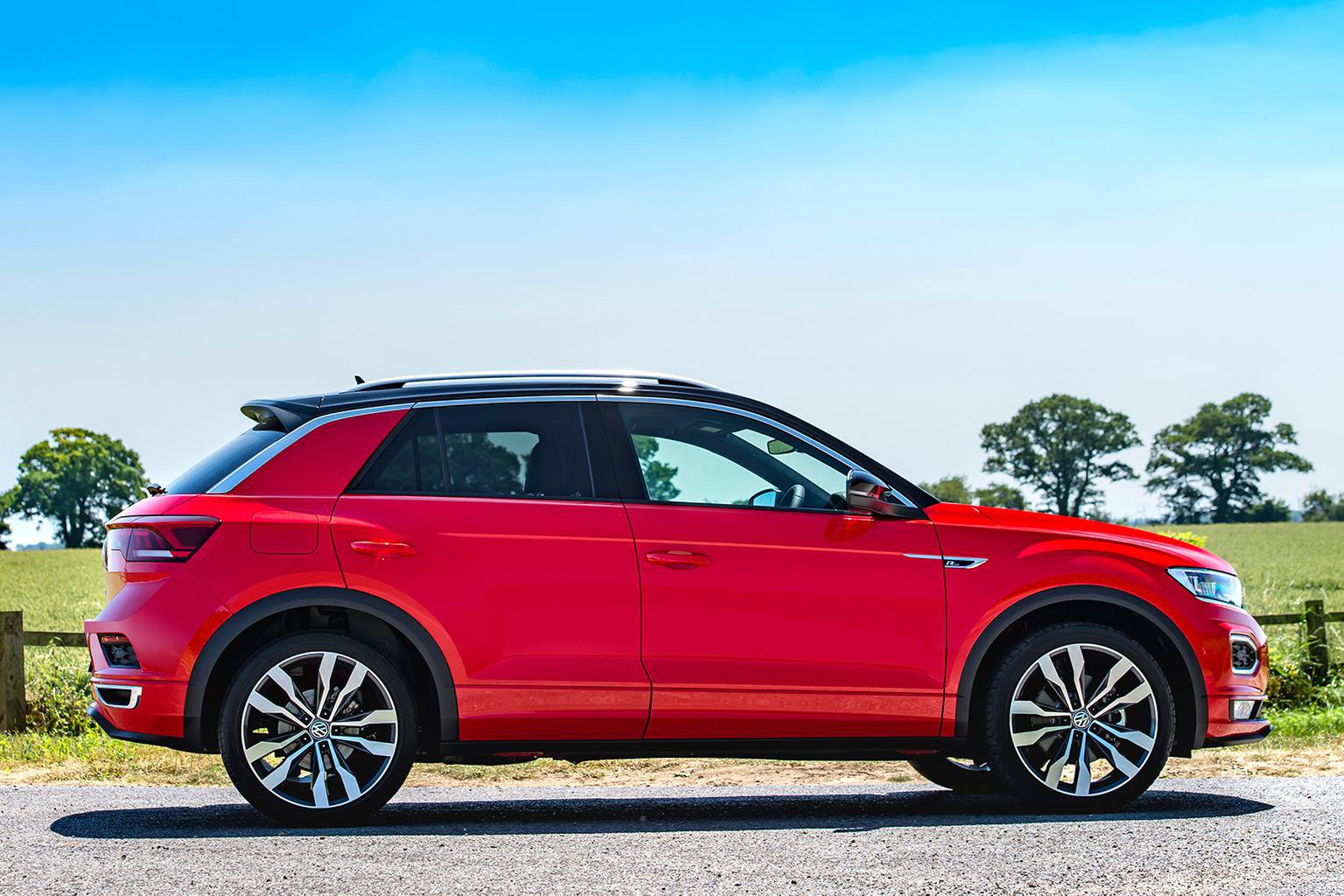 The R-Line gets part-suede seats over the regular T-Roc. They’re well bolstered and supportive, which is particularly useful when you're cornering – something you’ll feel comfortable with doing quicker, given the car's stability.

The rest of the interior is sensibly laid out, with every button and knob exactly where you’d need it to be. The infotainment touchscreen isn’t as attractive as the Golf’s, but it isn’t a notable step down.

What’s not forgivable is the material quality. Where the Golf features soft-touch plastics, the T-Roc has mostly hard, scratchy stuff. Worse still, it’s noticeable even before you touch it.

It’s nothing new, though, so you can read about the T-Roc’s interior in more depth in the space and practicality section of our full review. Take a look at our verdict on the rest of the model range while you’re there, too.