Like Denim jeans, personal computers and U2, the Renault Clio has enjoyed enduring popularity. And despite not ranking among our favourite small cars in its current generation, has found plenty of success worldwide. In fact, it's Renault's best-selling car. And this all-new version is designed to be the most advanced Clio yet, with semi-autonomous driving, a high-tech interior and partly electric power. Sounds impressive, then, and it will need to be to compete with rivals including the big-selling Ford Fiesta and our current class champion, the Volkswagen Polo.

In terms of design, the new Clio has a look in keeping with the latest Megane, while also taking cues from Renault's Symbioz concept car, which was shown in Frankfurt last year. Key features include small air deflectors in the front wheel arches designed to boost fuel efficiency by making the car more aerodynamic, and LED headlights. The new car sits on underpinnings which are shared with the Nissan Micra.

Although the new Clio is slightly shorter and sits lower to the ground than the current car, it is also more spacious. Official boot capacity measures 391 litres – more than any other small car rival – so you shouldn’t have any trouble fitting in a couple of suitcases or a large shopping haul. A height-adjustable boot floor is available, too. 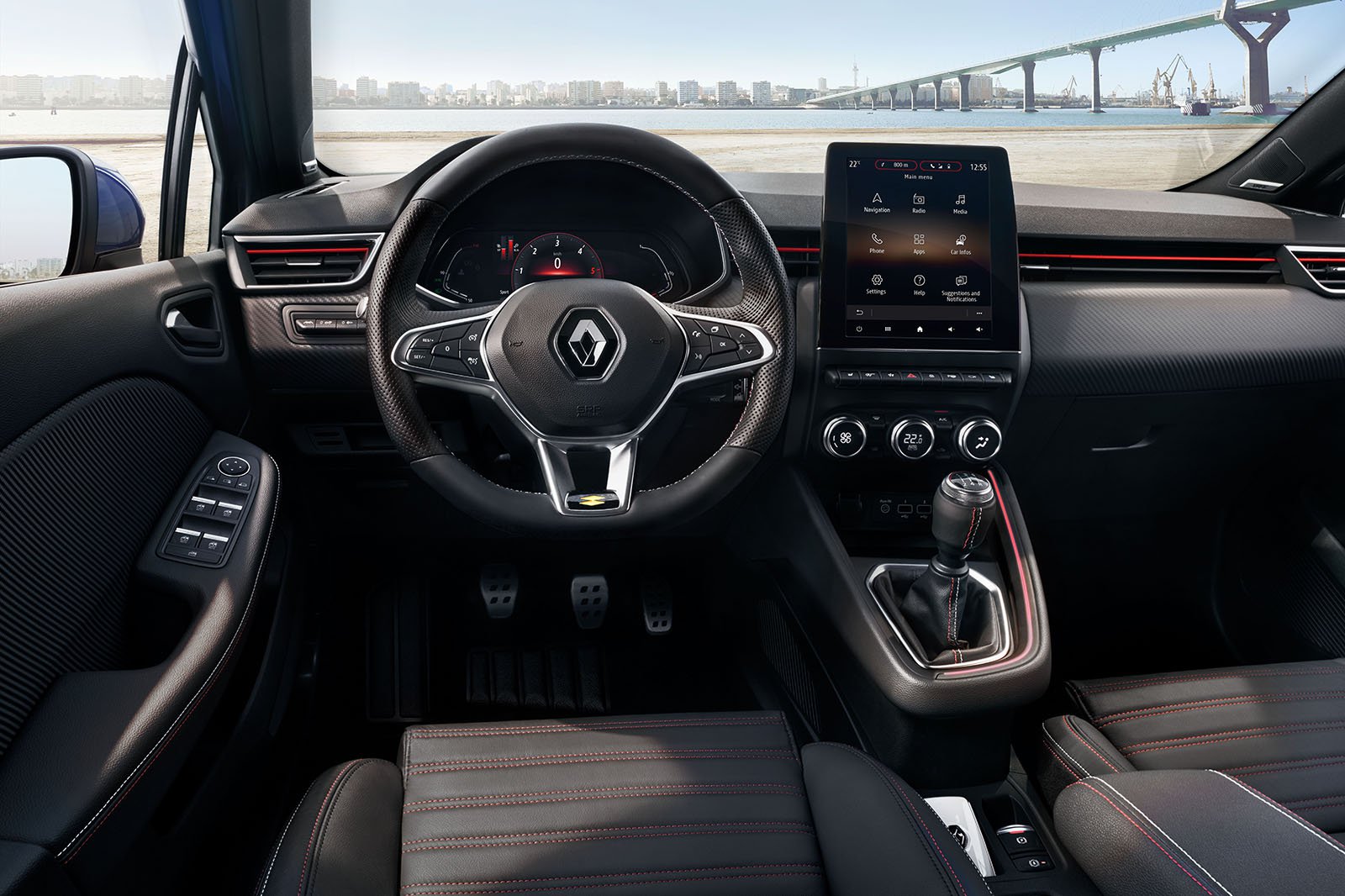 For now, Renault is only showing the interior of the new Clio, but that's no problem because there is plenty to talk about. Let's start with the central 9.3in infotainment touchscreen, which is an evolution of the one in the Megane family hatchback. Described as the largest screen on any Renault model, it's angled slightly towards the driver and includes all of the multimedia and navigation functions you'd expect to find. Infotainment in the current Clio is lacking in terms of both features and graphics, so this should be a substantial improvement.

The Clio will also be offered with digital instruments for the first time – something that's already offered on the rival Seat Ibiza, and the pricier Volkswagen Polo and Audi A1 – which sees the car's traditional analogue dials replaced by a configurable screen measuring either 7in or 10in depending on specification. In 10in form, the screen can also put the sat-nav map directly in front of you. 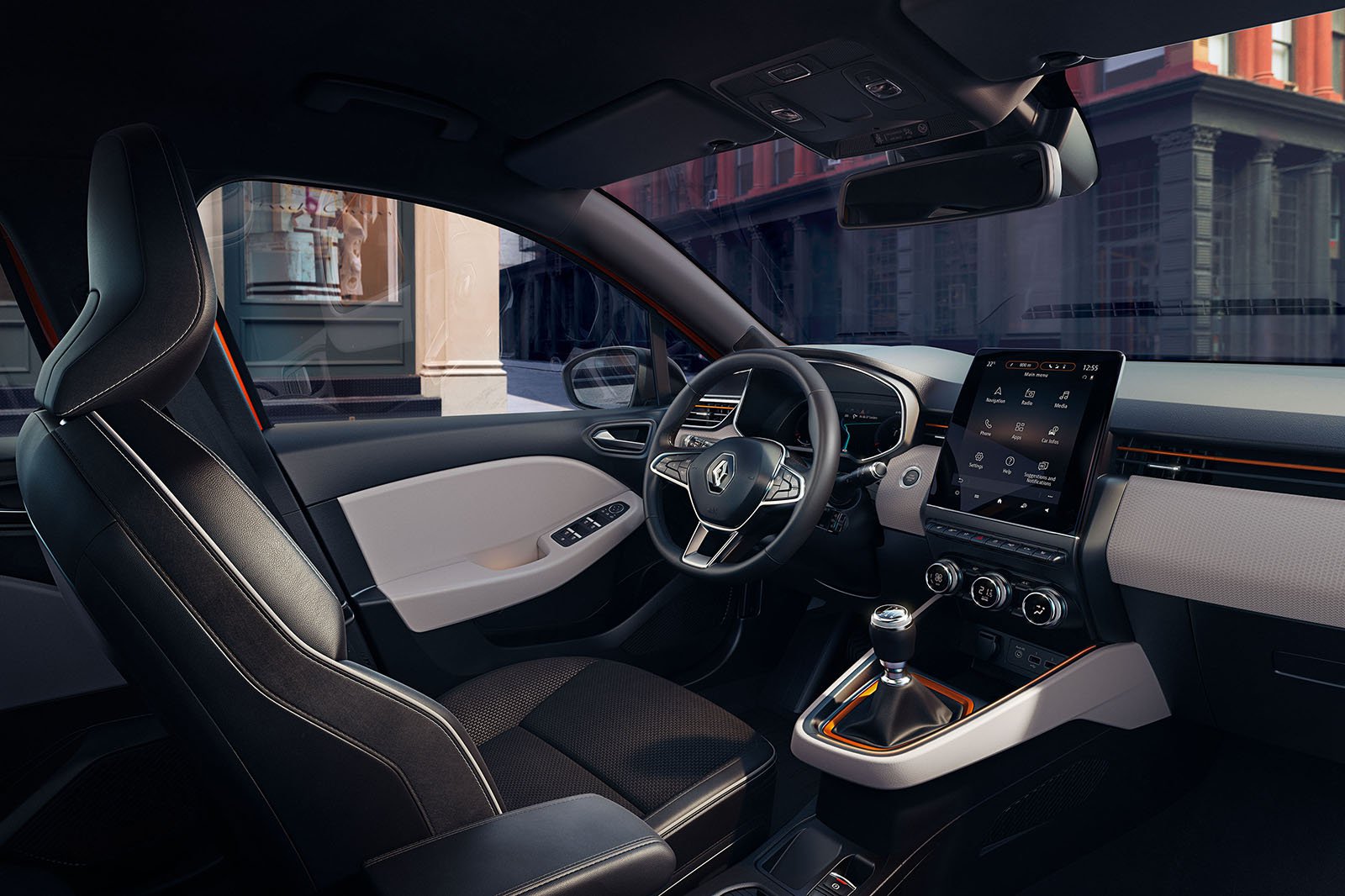 Other details include small digital displays for the climate controls built into the rotary knobs which control them, a shorter gearlever and a new multi-function steering wheel. There's also a wireless charging pad for compatible smartphones, and a centre armrest.

Finding a comfortable driving position was never a problem in the old Clio, but Renault has fitted new seats which offer a longer base and a more ergonomic shape. They're thinner, too, increasing knee room for rear passengers. There are more high-quality materials used throughout the interior, too, which is something we criticise on the current Clio.

Buyers will be able to personalise the interior of their car by choosing from eight design schemes, which change the colour of the centre console, door panels, steering wheel and armrests. Ambient lighting with eight different colours is also available. 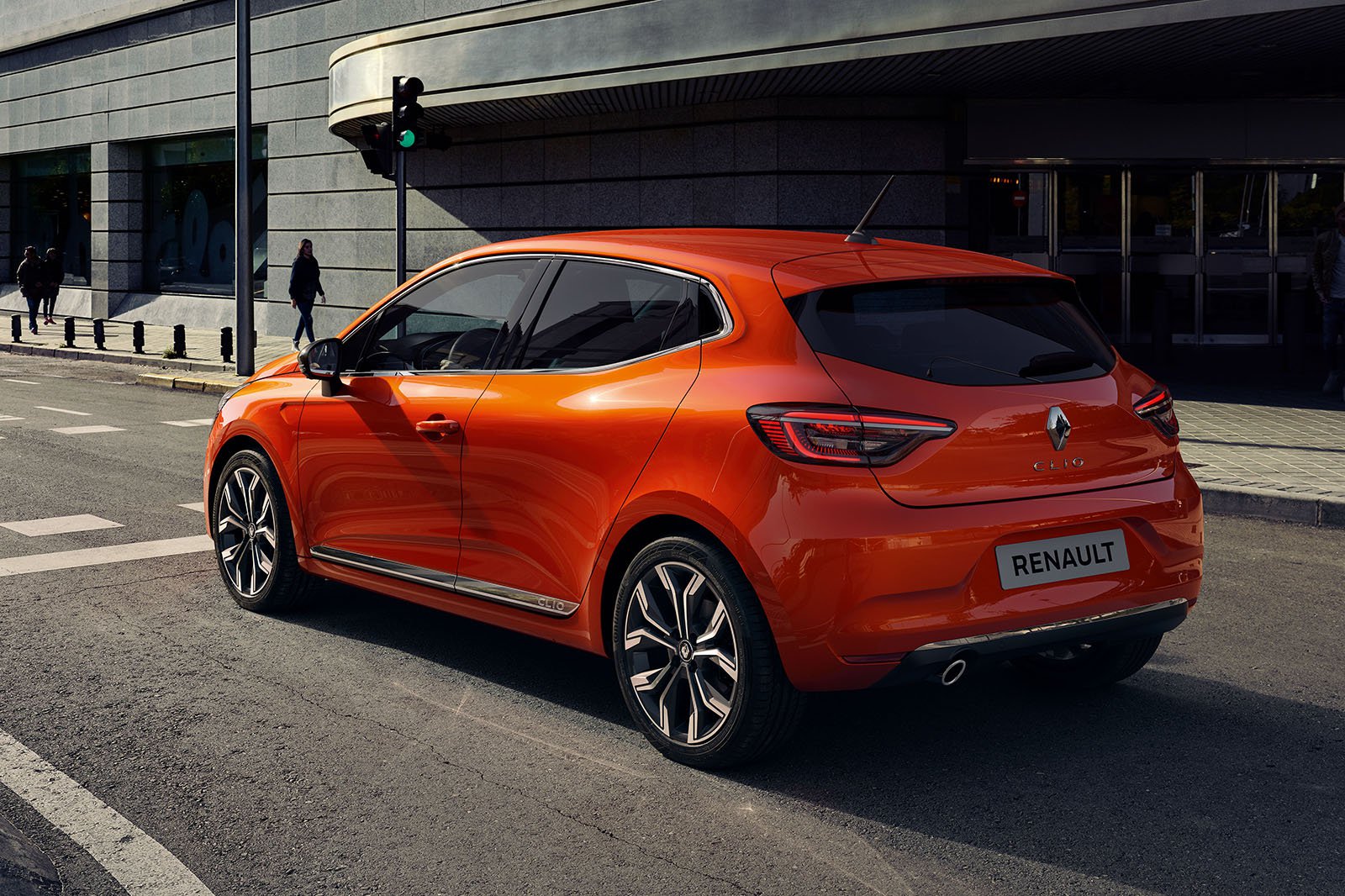 Aside from showing off the interior of the new Clio, Renault has confirmed that the car will be sold as a hybrid. The initial hybrid variant is likely to be a mild hybrid, which will see a 1.5-litre diesel engine joined by a small electric motor which can provide small bursts of electric power. It's not expected to be available at launch.

A plug-in hybrid variant of the Clio, likely badged as E-tech, is expected to arrive next year. The Clio's other engines will be 1.0-litre and 1.3-litre petrols. There will also be a 115bhp 1.5-litre diesel for long-distance drivers.

A fully electric version of the Clio is not planned at the moment, because bosses don't want to cannibalise sales from the Zoe electric car.

In time there will also be a new Clio RS hot hatchback, which is expected to come in 2020. It's likely to feature a 1.8-litre turbocharged petrol engine. 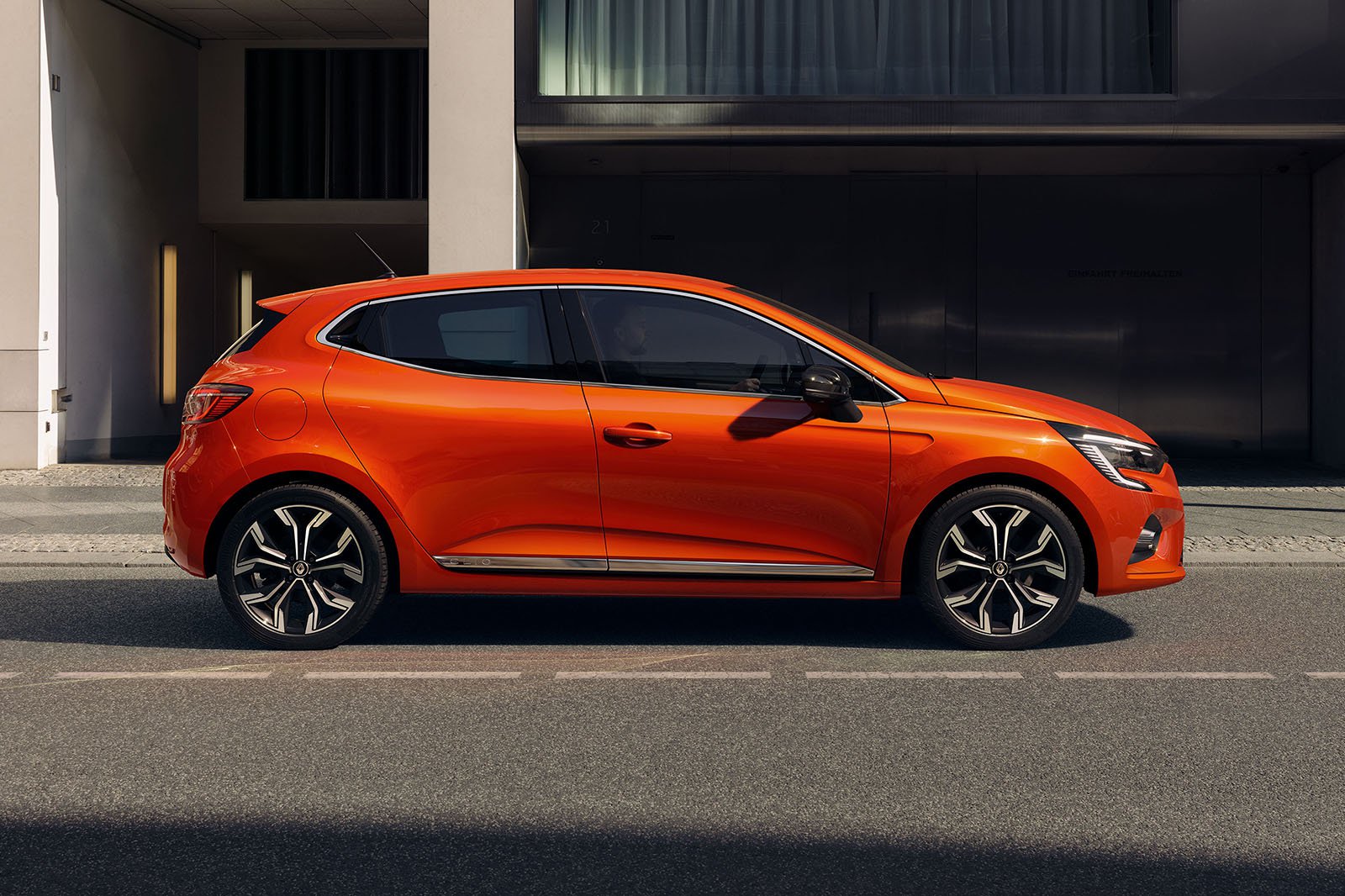 Speaking of the Clio RS, Renault is introducing a new trim level, dubbed RS Line, which gives the Clio a sporty look inside and out, and comes with sports seats, new aluminium pedals and red stitching on the seats and steering wheel.

Renault has also confirmed that the car will be offered with advanced driver assistance systems, meaning that the new Clio should be able to control its own acceleration, braking and steering on the motorway, and be able to park itself.

Alloy wheels up to 17in are available, and buyers can choose from 10 paint colours. 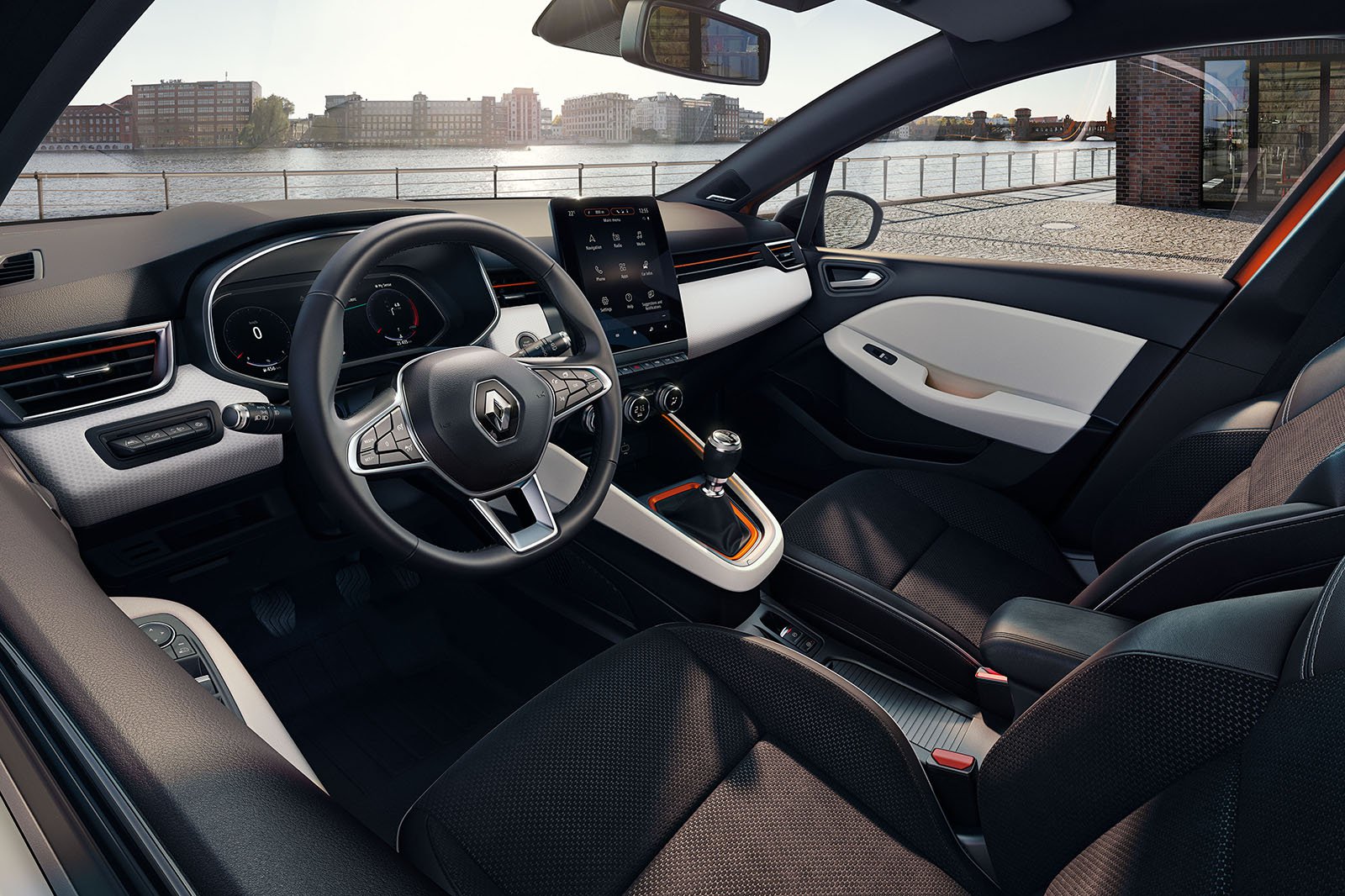 While nothing has been confirmed, prices for the new Clio are expected to start from around £13,500. The Ford Fiesta, by comparison, starts from £14,615 in five-door form. Discounts should be generous in time. For example, What Car? New Car Buying can currently save you an average of £1175 on the current car.

Used Ford Fiesta vs Renault Clio vs Hyundai i20