With a new petrol V6 under the bonnet, is the Volkswagen Touareg 3.0 TSI a better buy than its diesel counterparts?...

So, you’re in the market for a big, luxury SUV. You’ve seen all the diesel scare stories and have decided petrol power is the way forward. But what should you buy? Well, this new Volkswagen Touareg 3.0 TSI could be the answer.

Sitting at the top of the Touareg engine range, it uses a 3.0-litre turbocharged V6 and will cost you around £900 more than the most powerful diesel. However, it also has even stronger performance and is still relatively good value, being significantly cheaper than similarly punchy petrol rivals such as the BMW X5 xDrive40i and Volvo XC90 T6. So, if your budget sits nearer to £50k rather than well north of it, is this petrol Touareg any good?

Well, the X5 is quicker, but with 335bhp to chivvy you along, the Touareg will have the better of the XC90. Handily, you don't have to rev it hard for it to feel as strong as that number suggests and it's rather refined to boot. But although it feels and sounds smoother than the XC90 T6's 2.0-litre four-cylinder engine, it can't quite match the silken six found in the X5's nose. 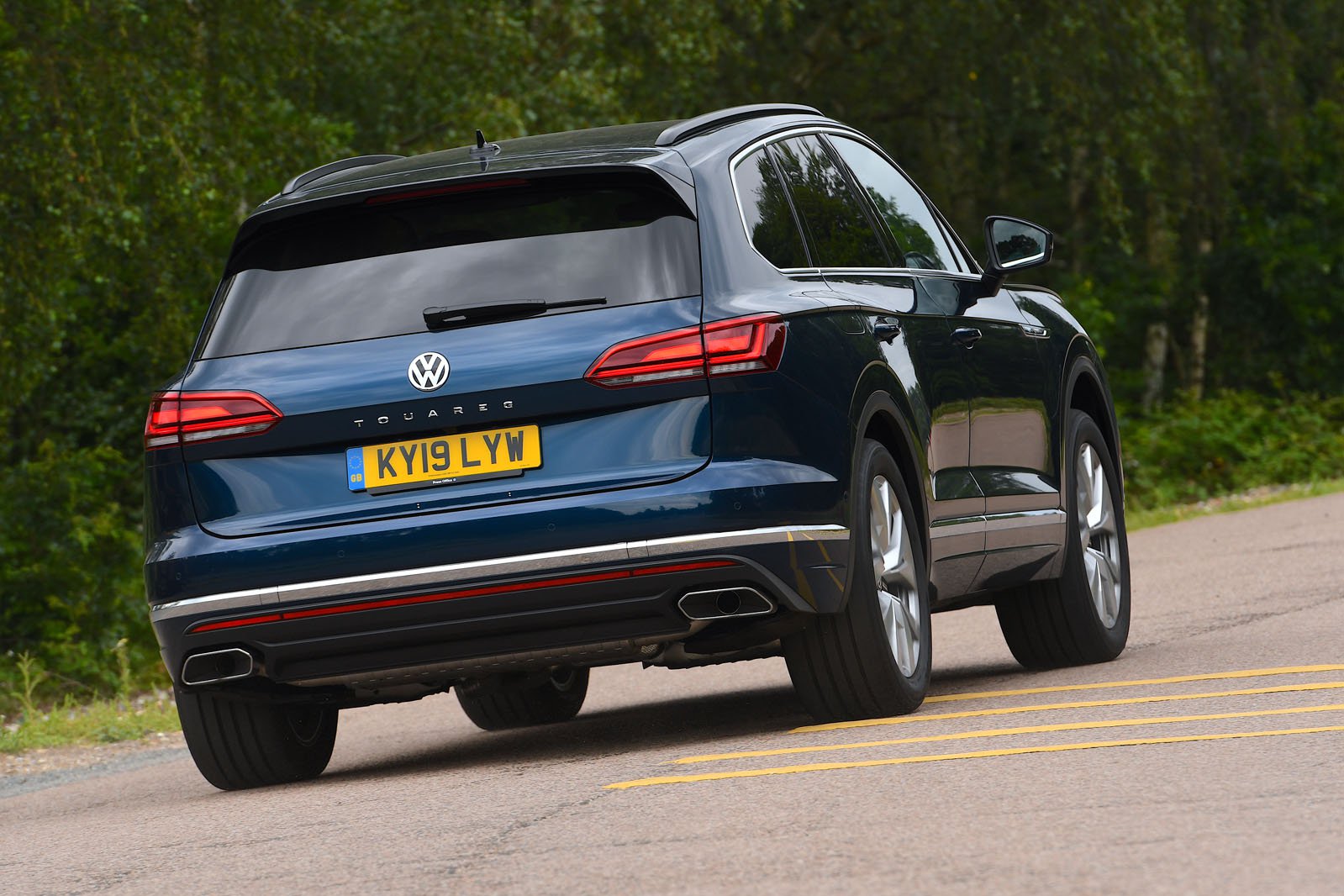 Getting the Touareg going can be tricky, because its accelerator pedal and automatic gearbox appear to be connected to its engine via a rubber band. Whether you’re pulling out of a side turning or already trundling along at a steady rate, if you press the accelerator a little in the hope of a correlating increase in speed, it isn’t forthcoming. That delay is especially frustrating when trying to merge with fast-flowing traffic from a standstill, but it's worth bearing in mind that the XC90 and indeed our favourite luxury SUV, the Audi Q7, are similarly afflicted.

So far, we've driven a couple of versions of the V6 TSI Touareg: an SEL on 20in wheels and an R-Line on 21s (both an inch larger than standard). Both were fitted with the Touareg’s optional adaptive air suspension (£2370). To describe the former, imagine sitting on a waterbed and swaying from side to side while someone periodically slaps you on the back and you’ll get the picture. In either of its softer settings, the loose body control bobs you about, which would be fine if it didn’t jolt over sharper intrusions. We’d suggest leaving it in the firmest Sport setting, which takes out the excess heave without making the jolts unbearable.

Unusually, the larger-wheeled R-Line actually improves comfort. You still hear a thud and feel a slight jolt over potholes and the like, but there's much less swaying and bobbing, even in Comfort mode. Just bear in mind that the X5's suspension is not only more cosseting but also quieter in its operation.

Four-wheel steering is included in the price of the suspension upgrade; this makes for a tight turning circle in town with only a light and easy touch on the wheel. Speed up and the steering proves intuitive, gaining enough weight to help gauge your inputs without getting too strenuous. But there’s no doubting the Touareg is a hefty beast, and while it handles more adroitly than the XC90, the X5 is a more rewarding car.

Still the Touareg is every bit as quiet as the X5 on the motorway, speeding along at 70mph with low levels of wind and road noise. 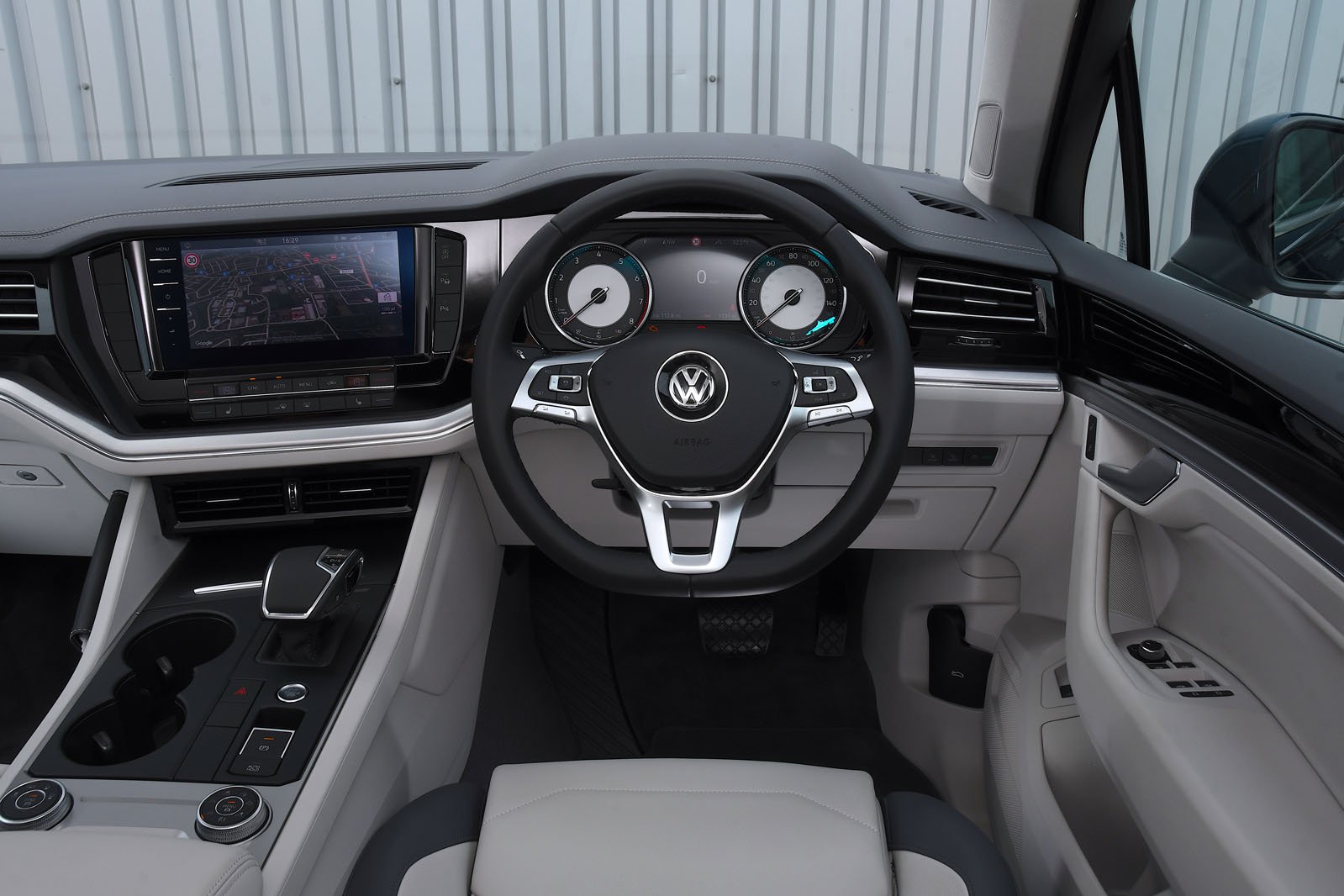 Inside, there’s bags of room for five people and a good-sized boot, but the XC90 is bigger still and comes with an extra pair of fold-out rear seats as standard. Both the X5 and XC90 also have nicer fixtures and fittings; the Touareg has a few too many iffy plastics, along with leather that looks obviously artificial.

The Touareg’s touchscreen infotainment system isn’t a patch on BMW’s iDrive setup, either. Not only is a touchscreen more distracting to operate on the move than the X5's rotary controller, but the Touareg’s menus also aren’t quite as logically laid out. Upgrading to the top-spec system makes things even more frustrating, because you lose physical buttons to operate the climate control and other functions.

For more information on the Touareg’s interior and the rest of the range, take a look at our comprehensive four-point review. Or to see how much you could save on a Touareg without any haggling, check out our New Car Buying service.