Capable of returning over 100mpg, the new Audi A8 60 TFSI e plug-in hybrid is the most efficient version of our favourite luxury limousine. But is it the best?...

In the last decade or so, we’ve seen hybrid tech make supercars quicker, family hatchbacks more economical and executive saloons quieter, but more often than not, those improvements come with a compromise, be that in the form of a higher list price or blunted dynamics; unsurprisingly, hefty batteries do very little for a car’s handling.

However, if there’s one place where hybrid systems have always made absolute sense, it’s in luxury limousines, like Audi’s new A8 60 TFSIe. In such big, softly sprung cars, on the limit handling and value for money aren’t very high up on the priority list, but near-silent running for business passengers and low emissions for a sparkly-clean company image are. 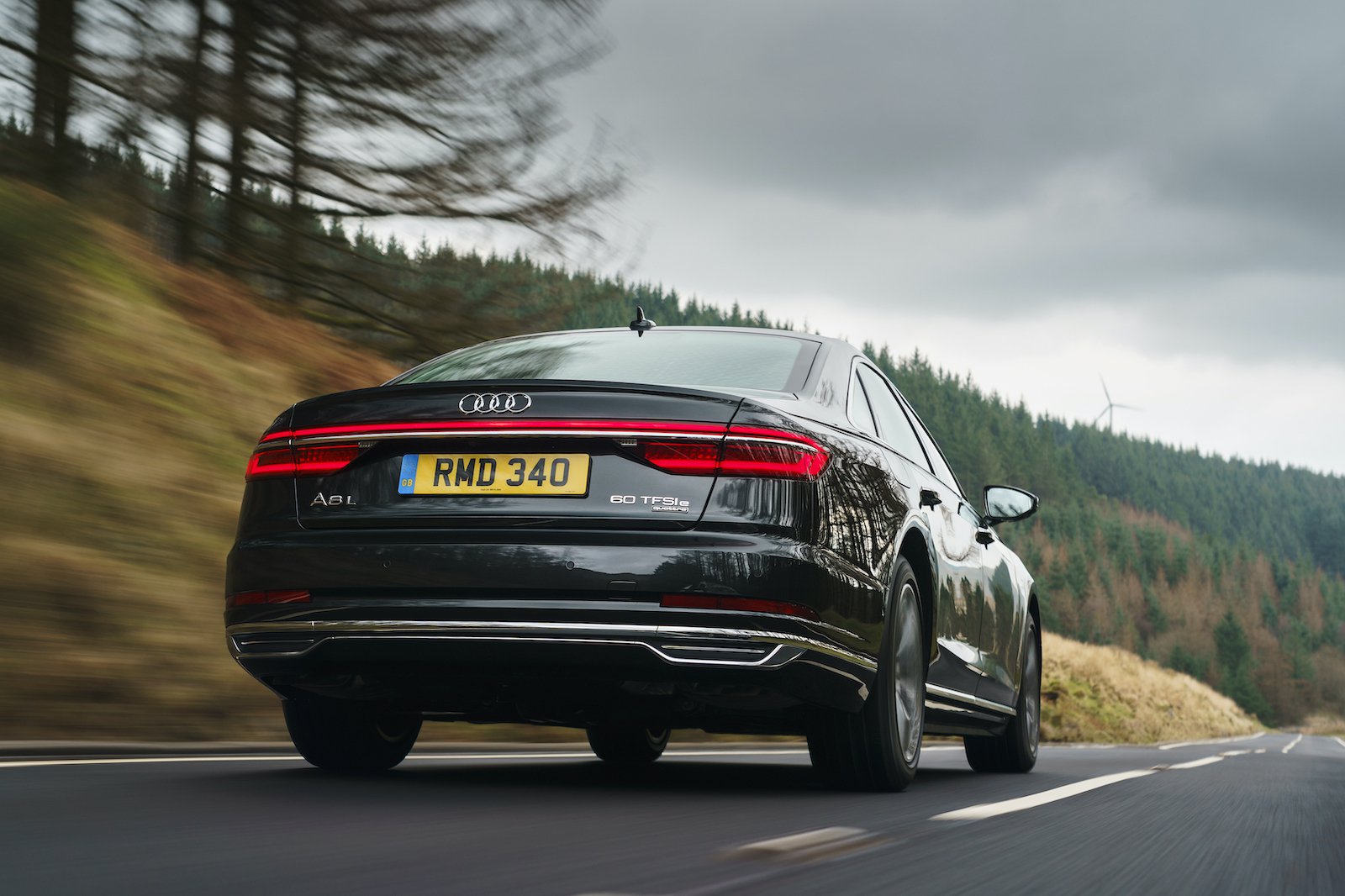 You might wonder then, why it’s taken Audi so long to join the plug-in luxury limousine party, especially when you’ve been able to get plug-in hybrid versions of the current BMW 7 Series and Mercedes S-Class for quite some time. Well, a little like Apple in the tech world, Audi might not always be the first to hit the market with innovative tech, but when it does, the brains at Ingolstadt like it to be class leading.

Therefore, Audi’s electrified A8 gets a 335bhp 3.0-litre turbocharged V6 petrol engine and a 126bhp electric motor, giving it a combined total output of 443bhp as the electric and petrol motors generate peak power at different points in the rev-range. This sizeable slab of horsepower is sent to all four wheels through an eight-speed automatic gearbox, resulting in pretty punchy performance – the run from 0-62mph takes just 4.9 seconds; that’s quicker than both the S-Class and 7 Series plug-in hybrids.

And yet, with most 60 TFSIe’s destined to spend their lives ferrying high flying execs around crowded city centres, we suspect an all-electric range of 28.6 miles (compared to 25 in the S-Class and up to 31 for the 7 Series) without the petrol engine switching on will be of more interest to buyers than outright performance. And to help eke out every last bit of range, the A8 also comes with a clever 25kW energy recuperation system, an intelligent freewheeling function and predictive navigation data to optimise the drivetrain for maximum efficiency – more on that later.

Described in a word, the A8 60 TFSIe is effortless. As we’ve reported previously, the A8 is one of the quietest and most refined cars on sale today, giving limos like the Bentley Mulsanne and Rolls-Royce Phantom a run for their money in terms of road and wind noise. Now imagine that level of serenity, paired with the silent running of a Tesla Model S. In effect, that’s what you have with the A8 60 TFSIe.

Indeed, with a fully charged battery, the plug-in A8 to all intents and purposes functions like a fully electric vehicle. Unlike early-generation hybrids with their weak electric motors, the Audi’s ‘permanently excited’ 134bhp unit has enough poke for most situations, whether pulling away from the lights (with none of the hesitancy you get in diesel A8s) or going for a last minute overtake. And given the run of a delimited Autobahn, it can even accelerate up to 111mph on battery power alone. 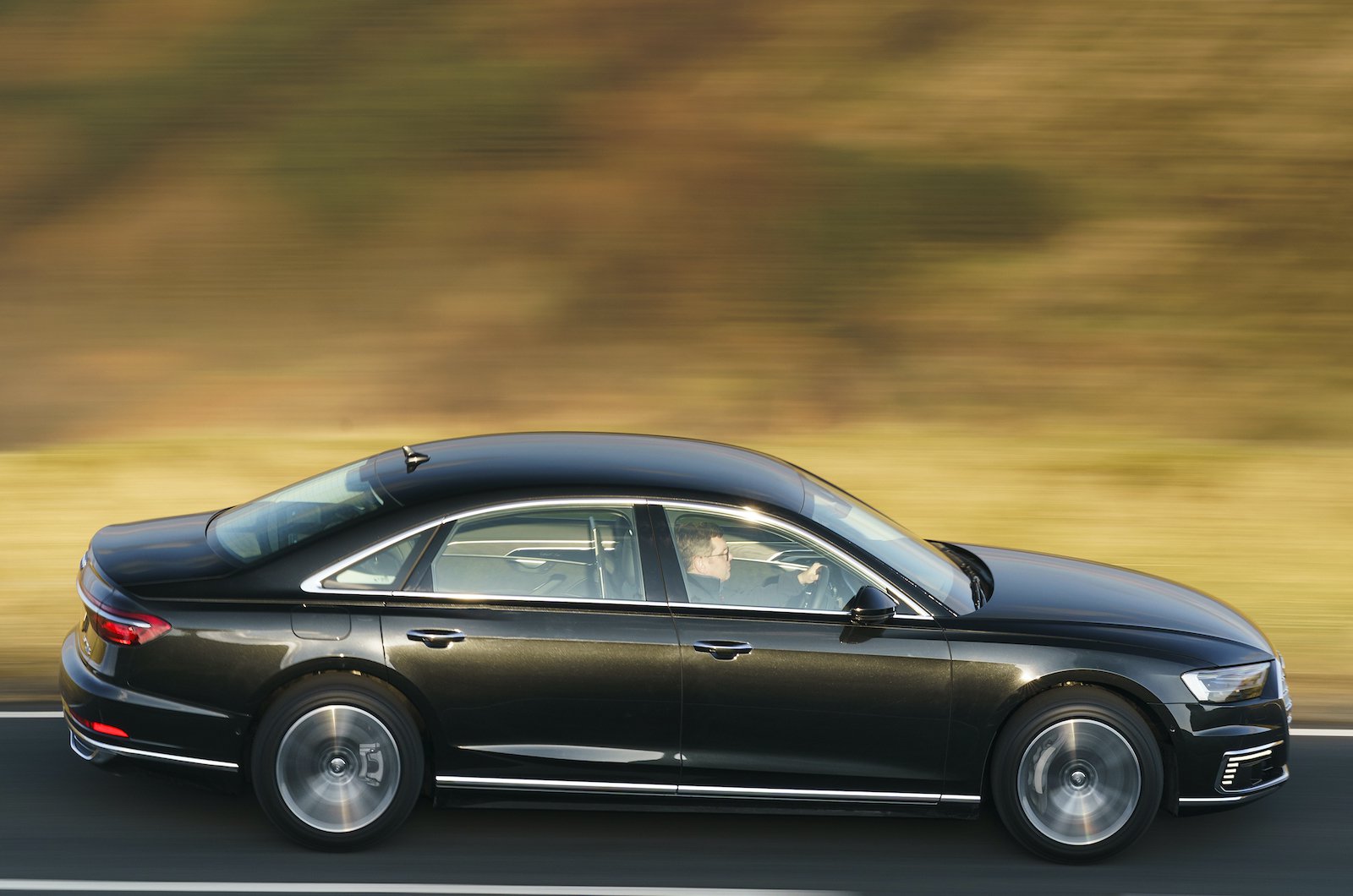 Even when you put the car into Dynamic Mode, the V6 petrol engine remains barely audible; it’s as if Audi’s engineers don’t want to ruin all the hard work they’ve put into making the 60 TFSIe quieter than a pair of industrial ear muffs. What you do get however, is improved accelerator response and access to the hybrid system’s full 443bhp. The resultant performance is staggering, but deceptive, the 60 TFSIe gaining speed like an A380 at takeoff; the only reason you know you’re accelerating at some lick is because the screen in front of you is displaying some rather impressive numbers.

Put simply, this is a car designed around the passengers, not for the driver. With all those batteries onboard it shouldn’t come as a surprise that 60 TFSIe wallows a little on its standard air suspension through bends, and its brakes can be a little inconsistent in feel as they try to claw back battery power during deceleration. The steering is light and accurate, but it never quite lets you know what’s going on between tyre and Tarmac.

Ultimately, this is a car that wants you to drive like a chauffeur. So much so in fact, that it’ll even give you lessons. As we mentioned earlier, the 60 TFSIe uses predictive navigation data to help you manage the battery’s charge, so on a short journey you’ll get plenty of electrical assistance, while on a longer one you’ll get more help from the petrol engine. The accelerator pedal will even give your right foot nudge when approaching a lower speed limit to remind you to lift off so you can put some juice back into the battery; the system being able to recover 25kW of energy from coasting and 80kW from the brakes.

So what are the negatives? Well, as mentioned earlier, it’s not quite as sharp to drive as a standard A8, but then again, the A8 has never been known for its agile handling. No, what’s more disappointing is that the weight of those batteries mean it’s not quite as supple as the regular car over urban imperfections. So instead of being by the best riding car in the class, it’s simply now on par on with the S-Class. 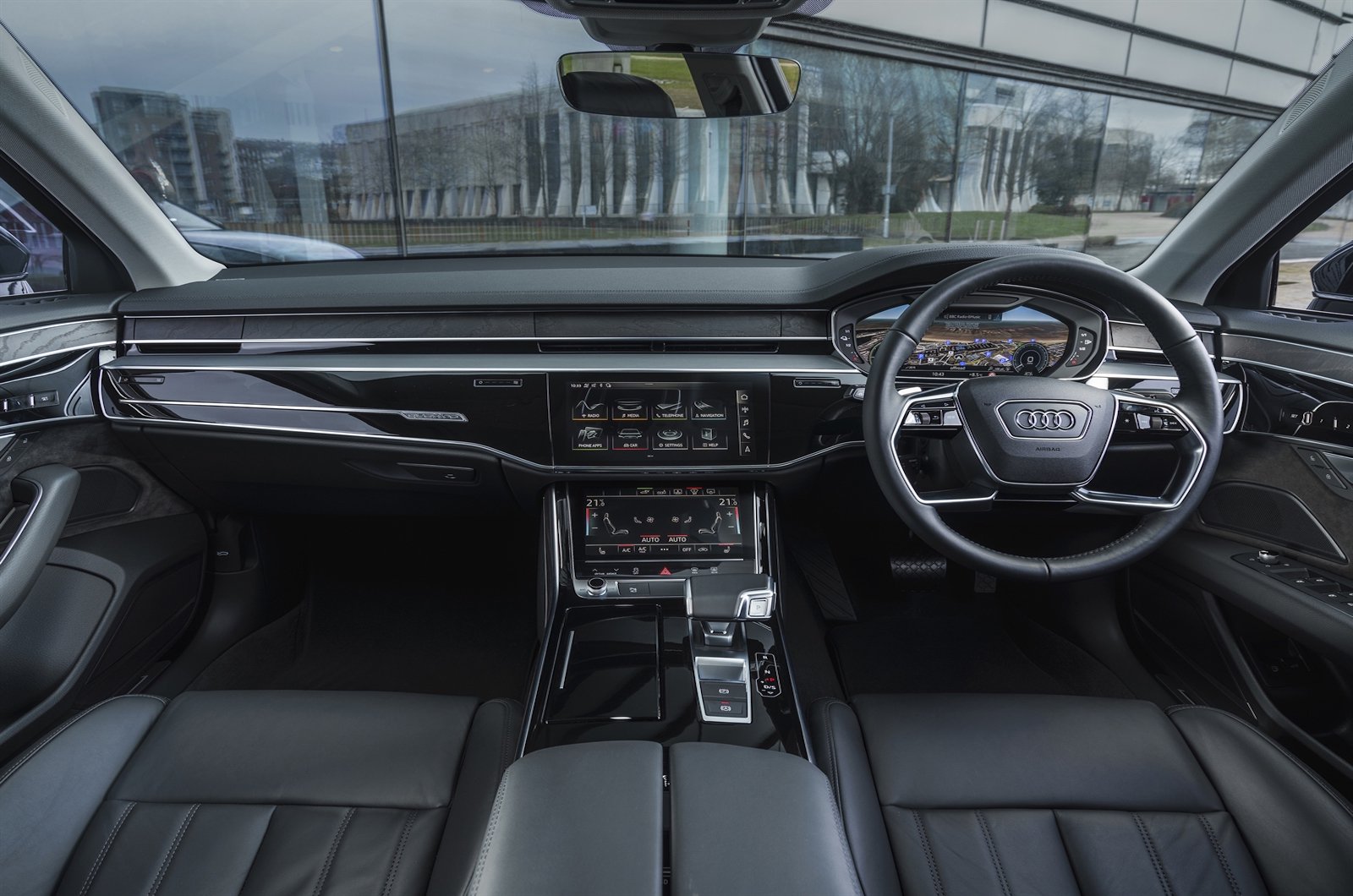 Like the standard A8, you might be a little disappointed when you first step inside; Audi playing it conservatively with the interior styling when compared to the verbose S-Class and sporty 7 Series. However, spend some time behind the wheel and it doesn’t take long before you start to notice that all of the materials are of an impressively high quality and that the fit and finish is better than anything you’d get from those two rivals. Ultimately, that’s more important to us than a jazzy design. 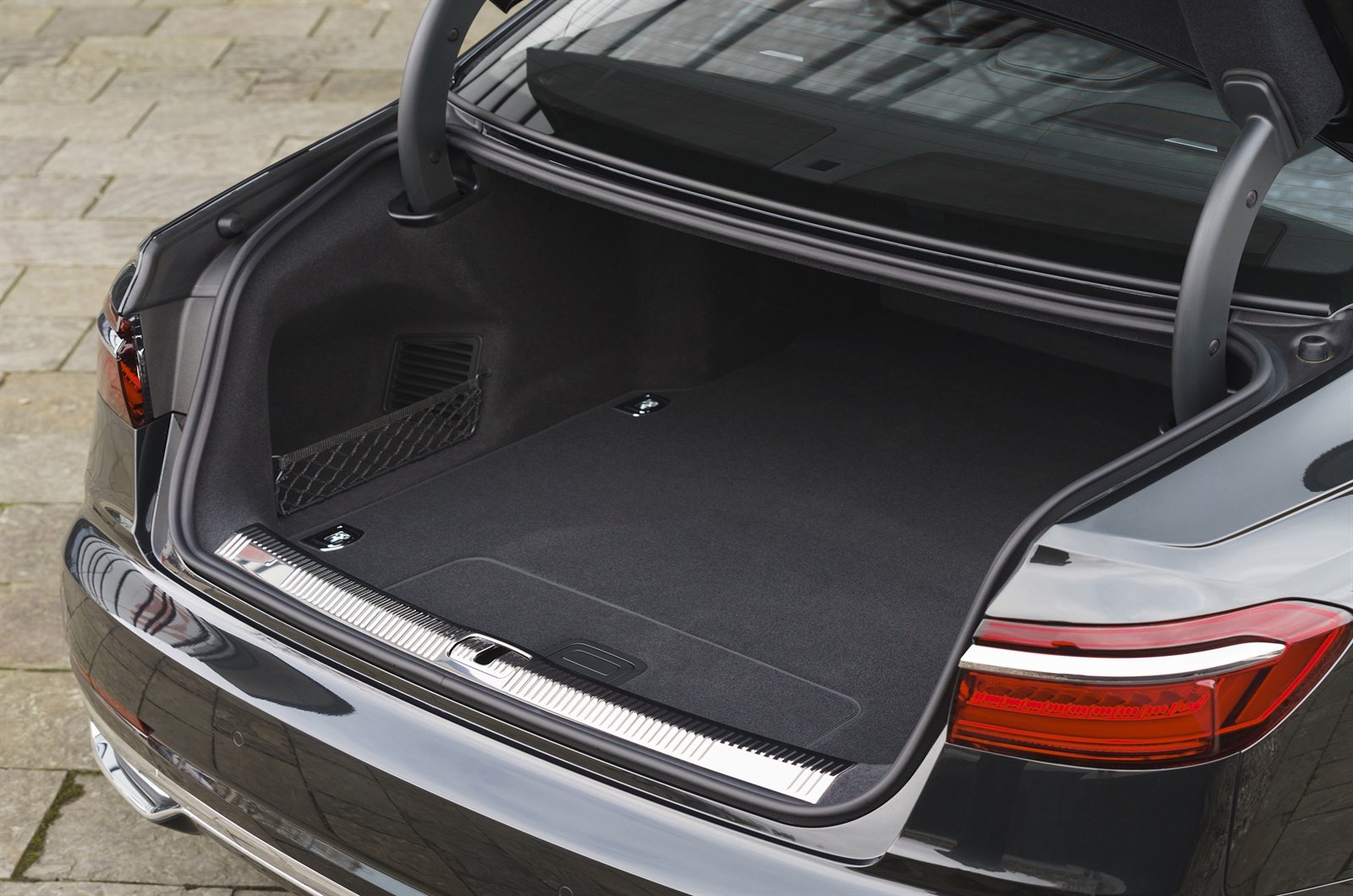 Like the standard car, you also get a 12.3in digital instrument display behind the steering wheel (called Virtual Cockpit) and two high-definition touchscreens – a 10.1in top screen and 8.6in one below – which dominate the dashboard. For a touchscreen based system, it’s rather impressive, being as sharp as a pin and quick to respond to inputs. However, the system isn’t perfect, being easy enough to use when you're parked up, but tricky to use when on the move; imagine trying to operate an iPad while driving and you'll get the idea. Both the S-Class and 7 Series have easier to use systems.

Despite the addition of hefty batteries, passenger space remains unchanged in the 60 TFSIe, so you still get slightly more space than in the back than you do in an S-Class or 7 Series. However, the same can’t be said for the boot – the luggage capacity dropping from 505 to 390 litres. That’s around the same loading space as you get in the plug-in S-Class but quite a bit less than in the plug-in 7 Series. For reference, even an Audi A4 offers around 480 litres of space.

Should you want to know more detail on the interior, infotainment, space or indeed the other engine options, have a look at our main Audi A8 review.