The Volkswagen T-Roc Cabriolet loses more than just its roof compared to the regular SUV – can it gain points elsewhere?... 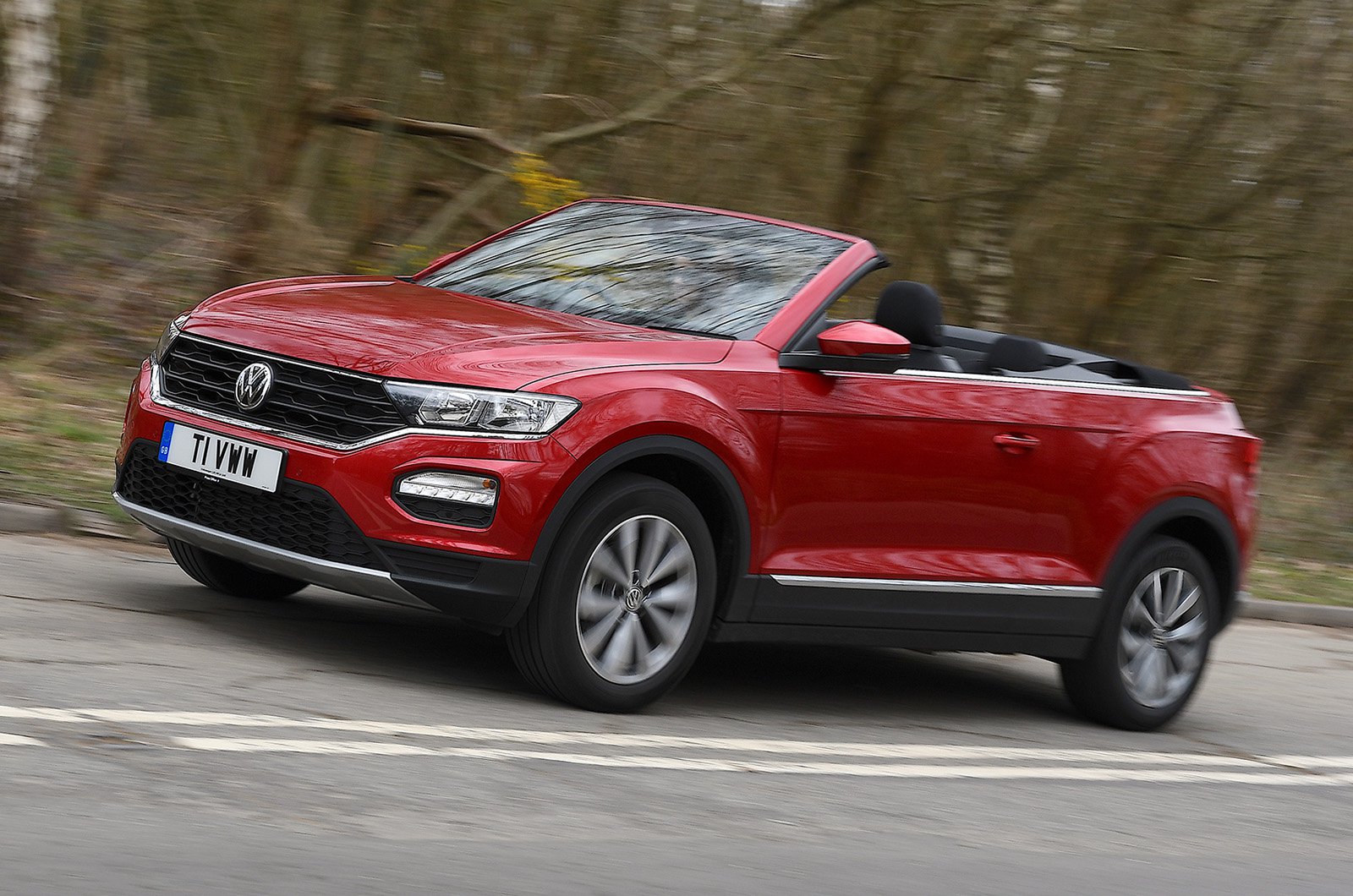 When car designers spend years crafting and sculpting their upcoming car, do you think they get sad when someone comes along and just cuts the top off of it? Sure, some cars are destined to become a convertible, but others, like the Volkswagen T-Roc Cabriolet, might seem like a random chiselling. Especially because, as well as the roof, Volkswagen has trimmed away a rear seat, two doors and the practical hatchback boot opening.

The only real airy SUV rival is the Range Rover Evoque Convertible, which was received with bemusement when it was launched in 2016. However, that’s larger and more expensive, so the T-Roc’s key rivals are drop-top versions of the Mini and BMW 2 Series. 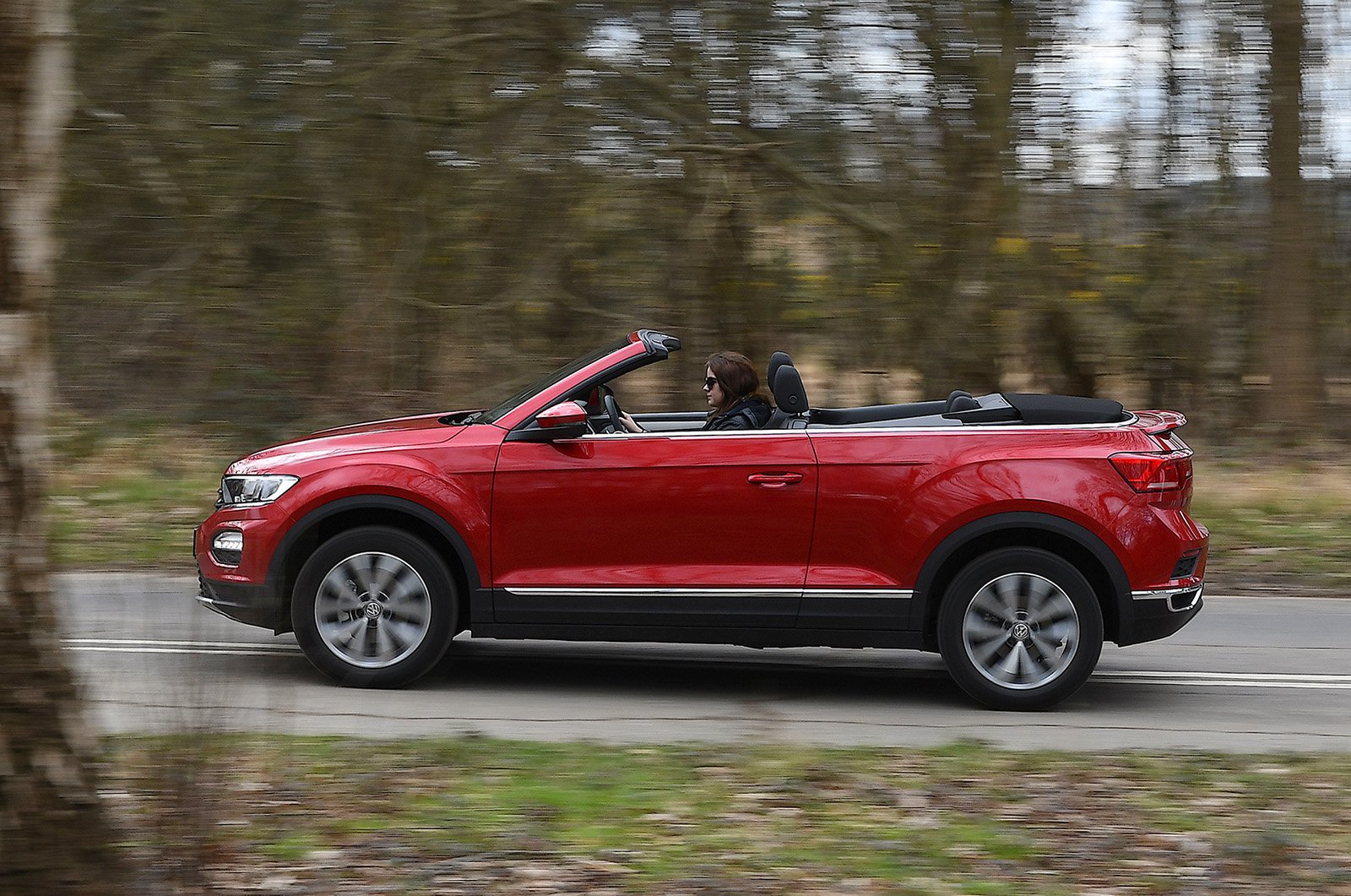 The T-Roc is already a favourite small SUV of ours, but it’s no surprise that cutting away such a huge chunk of metal has had an effect on how it drives. You get the same engines; a 1.0-litre petrol engine with 113bhp, or a 1.5-litre petrol with 148bhp, tested here but the Cabriolet is heavier than the regular T-Roc. That means it's slower on paper, but still has plenty of punch from relatively low engine speeds, so you’ll have no problem scooting away from a junction or accelerating up to 70mph. The six-speed manual gearbox is a little notchy but has a short throw so it isn’t too much of an effort to change gear. A seven-speed automatic ‘box is also available with this engine. 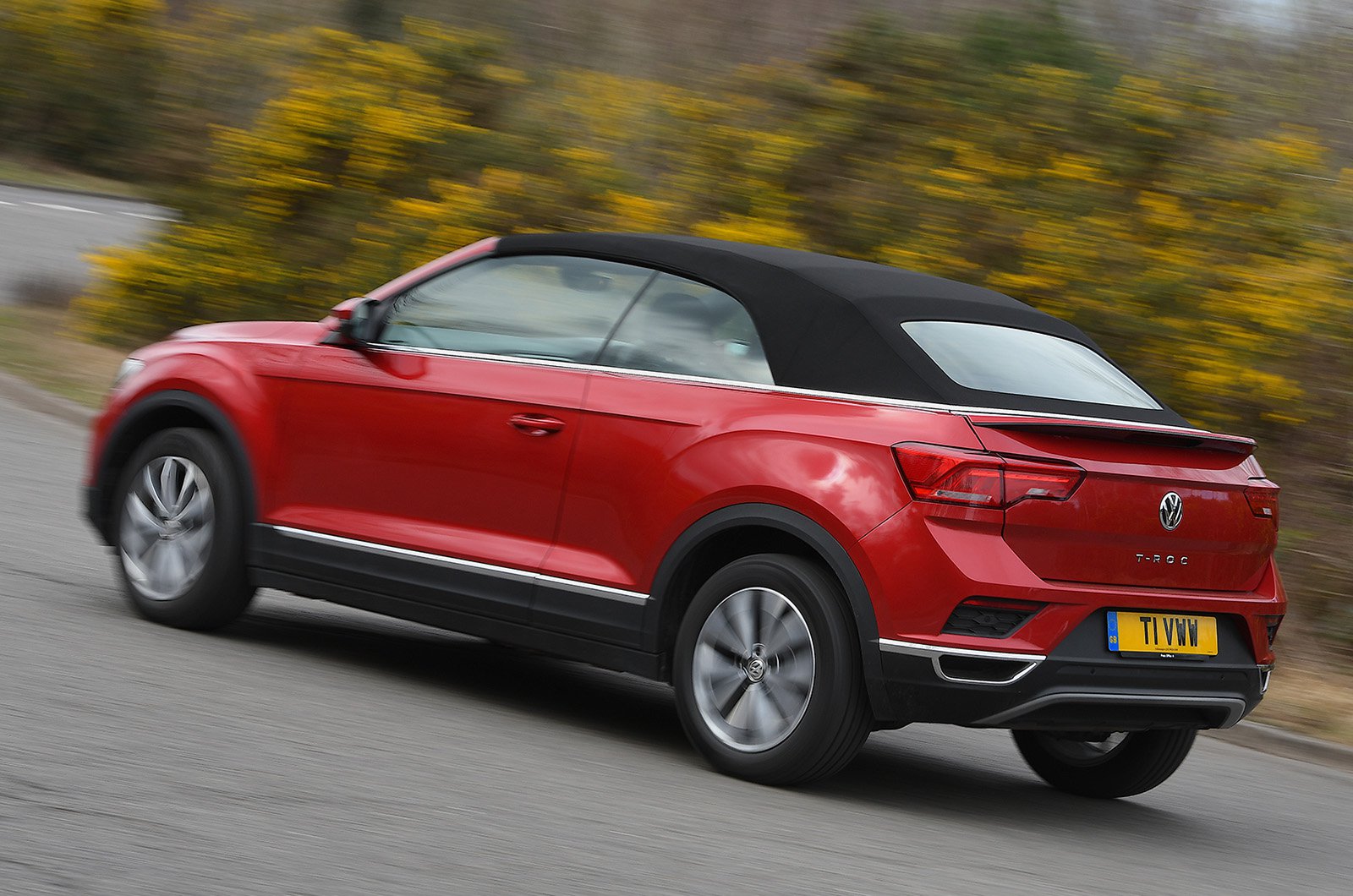 Sensitive steering does mean it feels a little twitchy at motorway speeds, while the front tyres have a habit of following cambers on the road. At least poor road surfaces are smoothed over comfortably, and larger disruptions, such as potholes or expansion joints, aren’t too jarring either. Thankfully it’s nowhere near as firm as the Mini Convertible.

With the removal of the roof, Volkswagen has had to add extra rigidity to the car, which is where the extra weight comes from. You are aware of this slightly around twisting roads, and there’s noticeable body roll when you start to push on. It's certainly not as agile as the lower, stiffer Mini.

Unsurprisingly, that fabric roof means you’re not as well isolated from the outside world as you might like. Wind noise, road noise, and even tyre noise from passing vehicles, are all present from the interior. Our test car also had an annoying whistle coming off the top of the windscreen, both with the roof up and down. The smaller, more cosseting interior of the Mini Convertible means it doesn’t feel quite so exposed roof up or down. 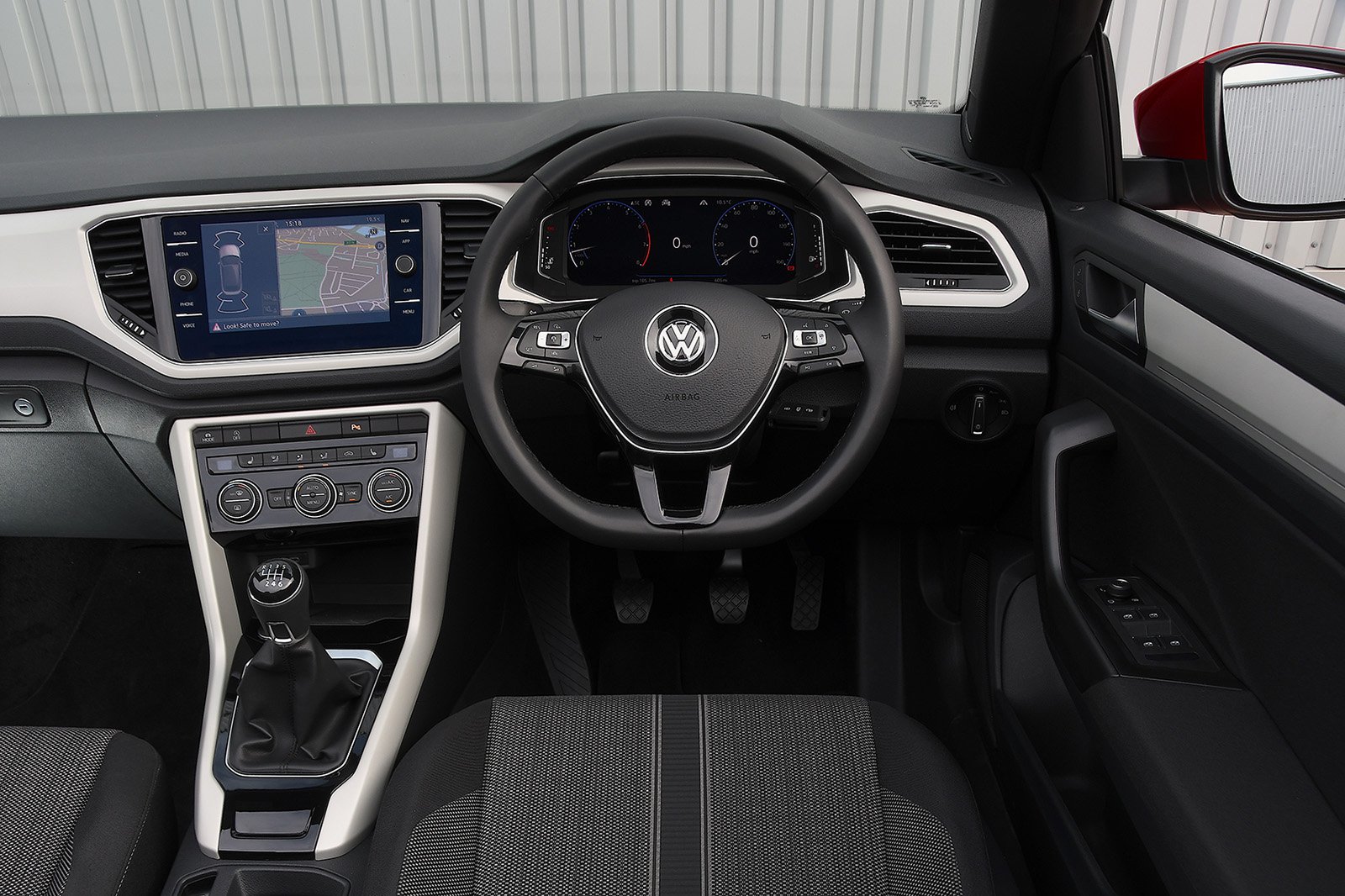 The interior is essentially a carbon copy of the regular T-Roc, so there's a sea of scratchy plastics even across the top of the doors and dashboard. At least everything is logically laid out with Volkswagen’s crisp and easy to use 8.0in infotainment screen taking pride of place and including Apple CarPlay and Android Auto smartphone mirroring as standard.

The driver’s seat has plenty of movement to help you get comfortable with lumbar support included, although electric adjustment isn’t available on any trim. Naturally, being based on an SUV, you get a raised driving position so you can peer over far more hedgerows than in a regular convertible. 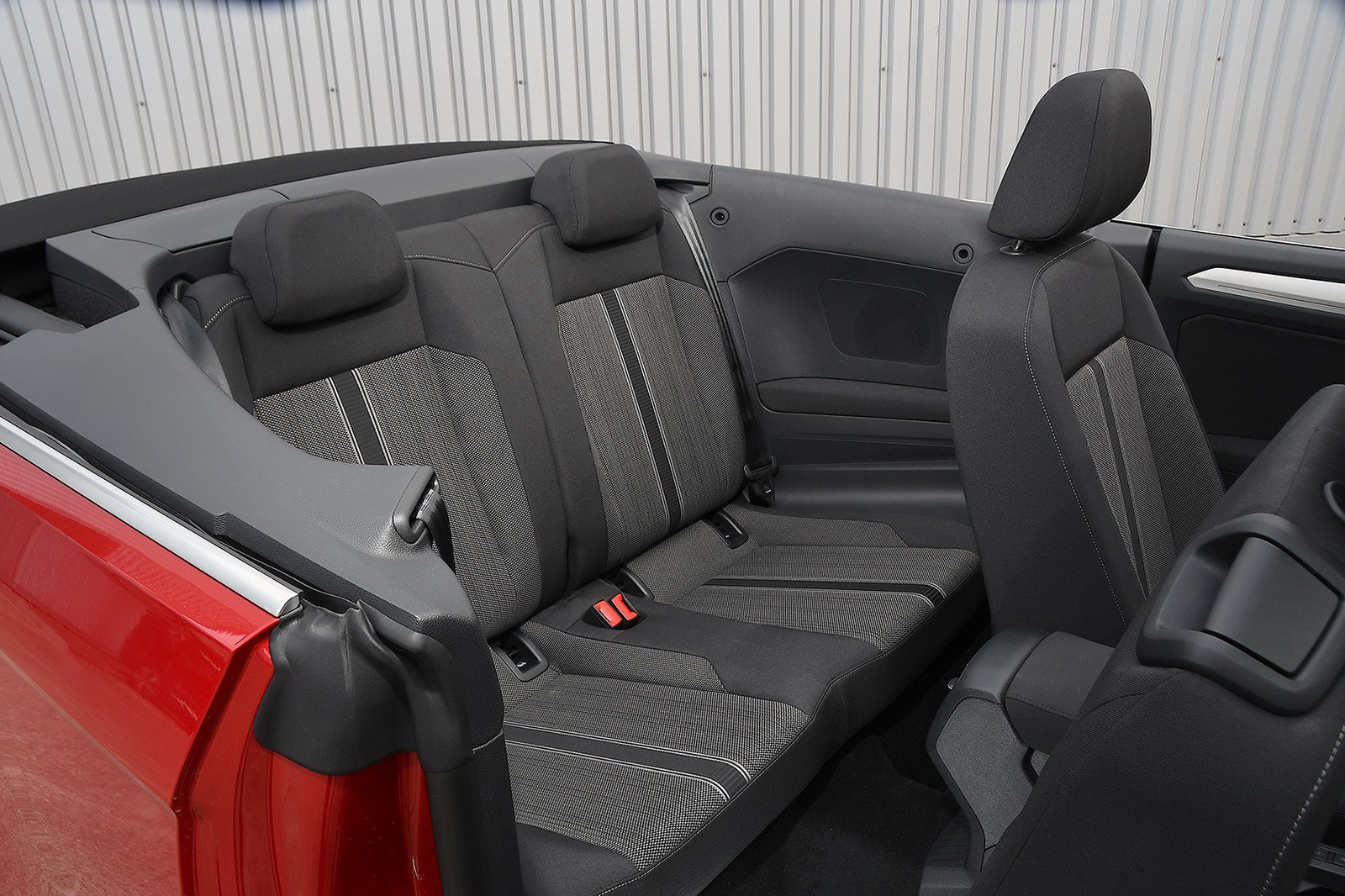 Look behind you, though, and you’ll see only two seats in the back. Space for those passengers is limited, too – the back of the fabric roof slopes down and cuts into headroom, while knee room is also restricted. There aren’t even any cupholders for your hemmed-in passengers. At least you can just about get two adults back there – the Mini Convertible will struggle to accommodate anyone with, well, legs.

Although there are only two doors, getting in the back is easy, thanks to a wide opening and a sliding front seat allowing for plenty of access. 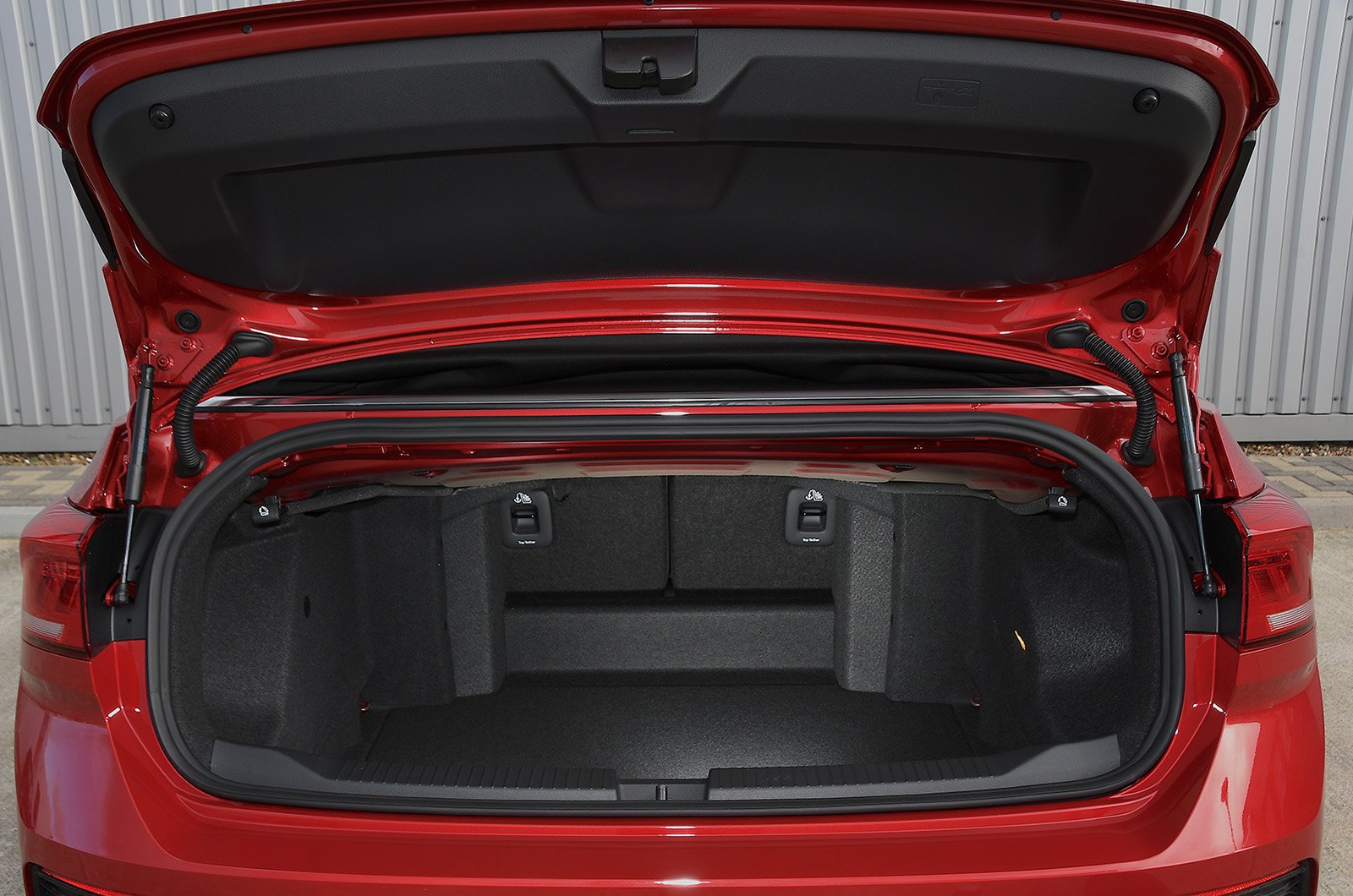 The practical hatchback boot is also dismissed in the T-Roc Cabriolet, with a small lid that hinges upwards to reveal a narrow opening. There’s a high load lip, large wheelarch intrusions and it narrows the further in you go; in fact, it loses 161 litres of space over the regular T-Roc meaning a total of 284 litres. Even the Mini Convertible offers 215, and that’s a small car: not an SUV. At least the rear seats fold 50:50 if you do want to attempt to carry anything longer.

To read more about the regular T-Roc on which it's based, click our full review here.